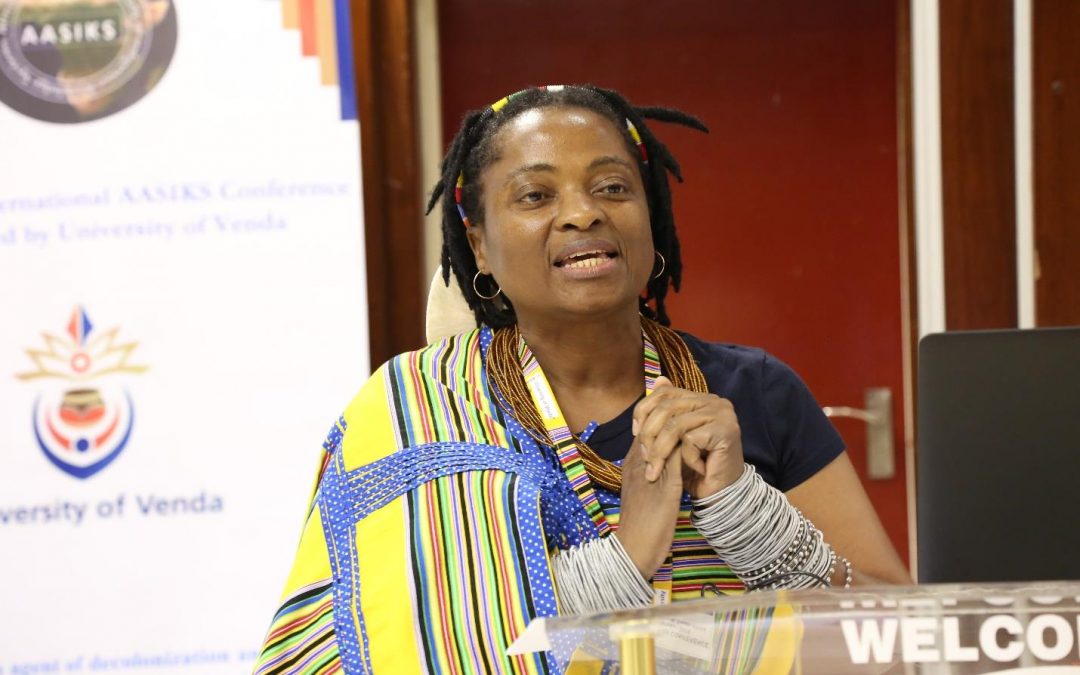 The Vice-Chancellor and Principal of the University of Venda (UNIVEN), Dr Bernard Nthambeleni officially opened the 5th African Association for the Study of Indigenous Knowledge Systems (AASIKS) conference which was hosted by UNIVEN. The conference took place at 2Ten Hotel, Sibasa from 23 – 25 October 2019. The 2019 AASIKS conference was held under the theme, “Indigenous Knowledge Systems as an Agent of Decolonisation and Transformation for Socio – Economic Development in Africa”. 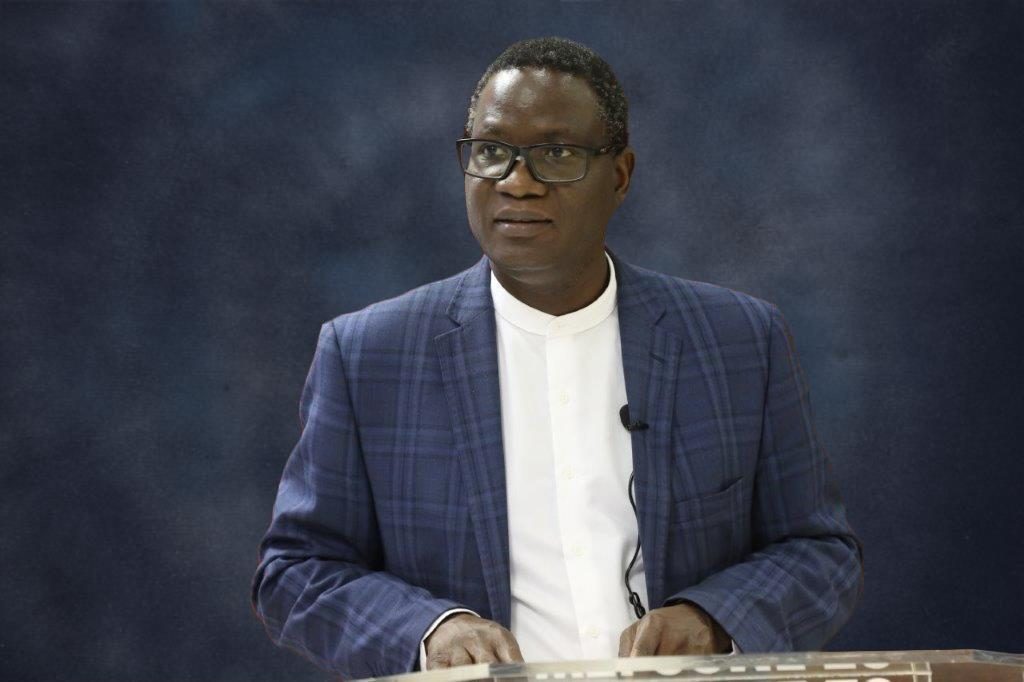 When officially opening the conference, the Vice-Chancellor and Principal said “We are proud that this conference comes in the wake of major milestones in South Africa when ‘The Protection, Promotion, Development and Management of Indigenous Knowledge Act 6 of 2019’ has just been promulgated which aims amongst others, to provide for the protection, promotion, development and management of indigenous”. He further said, “the presence of the national Intellectual property policy which sort to protect IKS through the use of IP regimes like patents, trademarks, designs and copyrights is an important vehicle for universities to respect the intellectual property of indigenous communities”.

Dr Nthambeleni added that the University of Venda is one of the few institutions offering Bachelor of Arts in IKS and the first cohort of students graduated a Bachelors’ degree in IKS in 2016.

The Vice-Chancellor and Principal concluded his speech by sharing with the delegates that UNIVEN is in the process of crafting the 2021-2025 Strategic Plan, which includes a Strategic Thrust on Entrepreneurial University. It is therefore important for UNIVEN to host a conference of this nature where scholars should deliberate on how to achieve inclusive and sustainable development; improving students’ graduation opportunities within the much-needed debate regarding the transformation of the curriculum and decolonial scholarship.

He encouraged the delegates to continue teaching Indigenous languages in order to preserve the knowledge which is disappearing.

A Three-day conference afforded an opportunity for researchers and academics, indigenous knowledge holders, traditional healers and students to discuss progress made and challenges experienced and, most importantly, shared best practices. 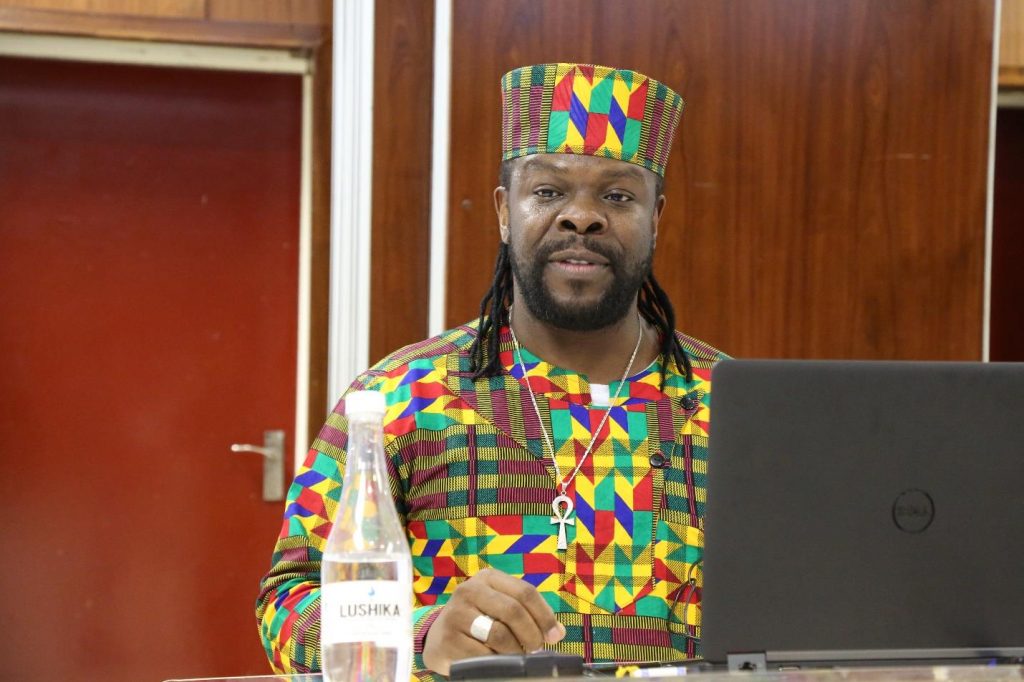 The keynote address delivered by Dr Hlupheka Chabalala, who in his presentation indicated that there is a need to systematise African Natural Medicines for future clinical applications. This has been demonstrated by our great innovative African ancestors like Aim Hetep and Merit Ptah 5 000 years ago, in Ancient Egypt. There are unlimited numbers of ancient records demonstrating that Africans had high sciences of medicine. This should be done through research and development initiatives, which may immolate progress witnessed in China, India and most oriental countries that have universities, hospitals, industries and farms on natural medicines.

Dr Chabalala committed himself and said, “I would like my unit to support and mentor young UNIVEN IKS students to be pioneers in this study area”. Dr Chabalala gave a very insightful speech challenging the students to be curious, deep and not just take anything written at face value. They must seek to go deeper.

The conference was an opportunity for a critical engagement on how Africans can bring indigenous knowledge and science together better. In most of the presentations, it was discussed that people express themselves and understand better in their indigenous languages.

It was noted that there was an increasing realisation among researchers, developmental agencies, policy makers and academics, among others, that African indigenous knowledge was an under-used resource in Africa’s developmental process. People were encouraged in learning from what local communities already knew created an understanding of local conditions, and provided an important context for activities designed to help them.

Over the three days, researchers, students and knowledge holders presented their work, discussed the challenges they have experienced and, most importantly, shared best practices with others in IKS fields.

Subthemes addressed during the conference include the Education and Decolonisation; Implementation and Practice; Philosophy and Sociology; IKS and Socio-Economic Development; and Social Entrepreneurship Development. 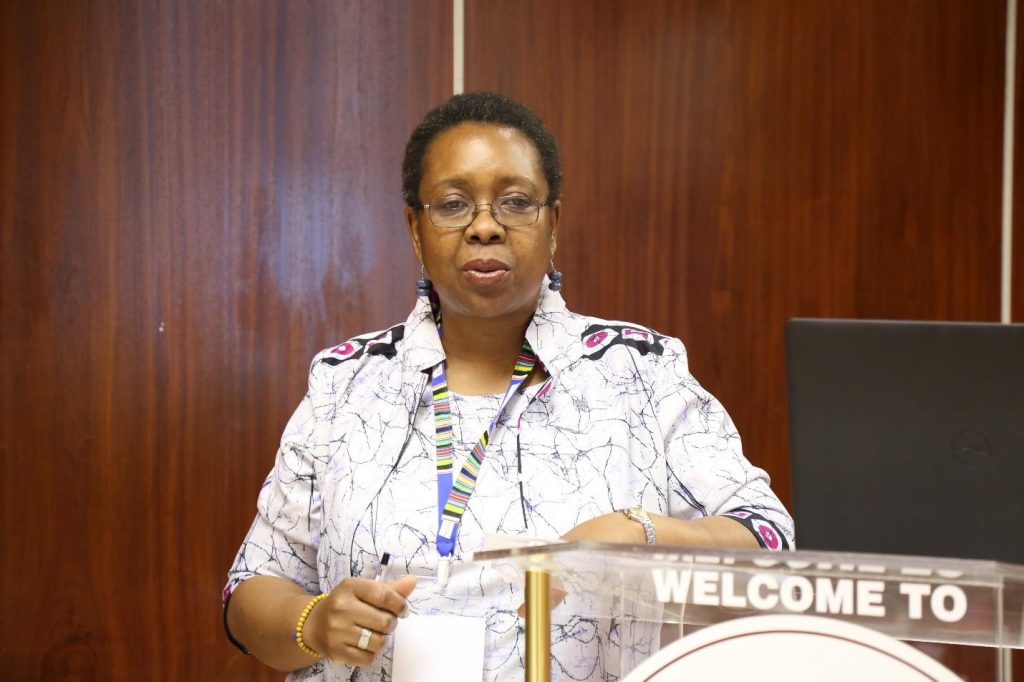 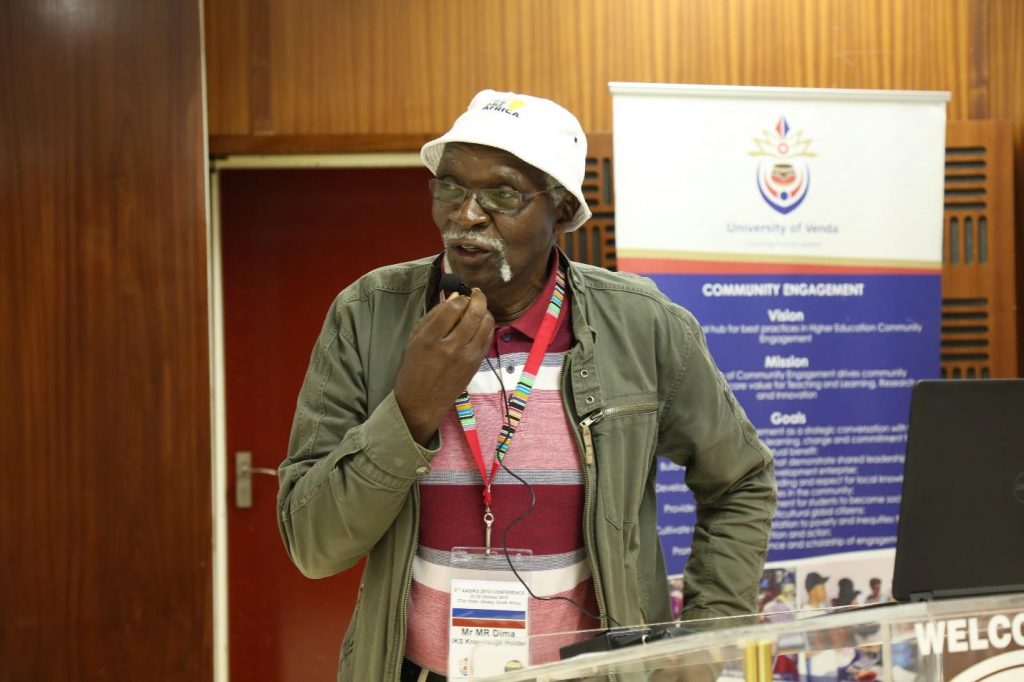 Above: Dr Dima when presenting (one of the knowledge holders) 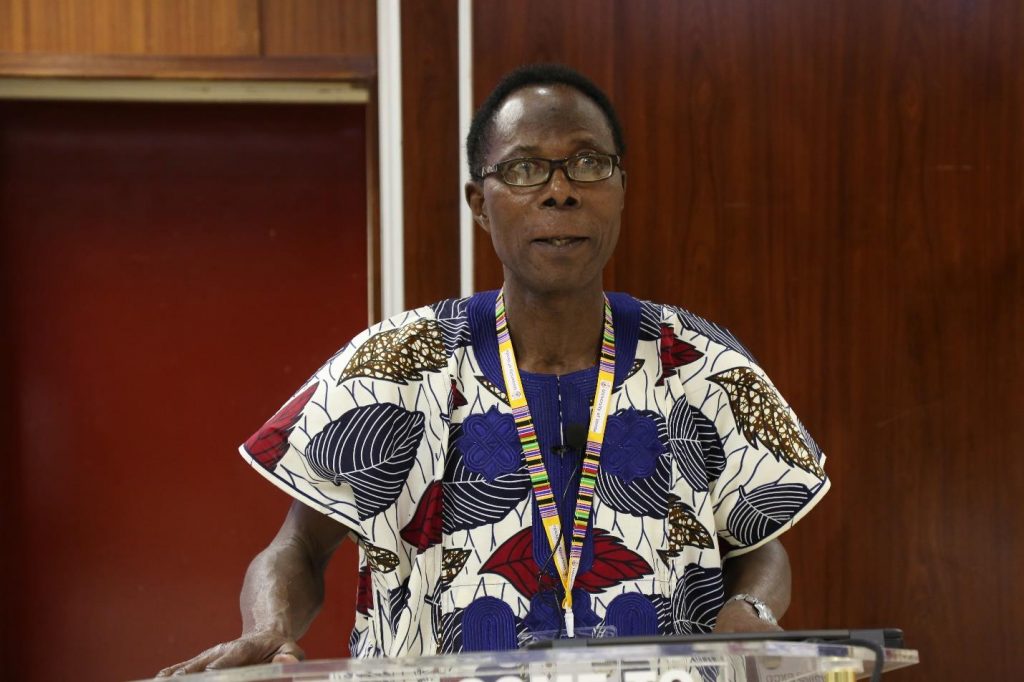 In his concluding remarks, Prof Emeritus Meshach Ogunniyi commended the University of Venda for their hospitality and making the conference a success. He thanked students for their active participation throughout the conference. He advised students to write selling CVs. 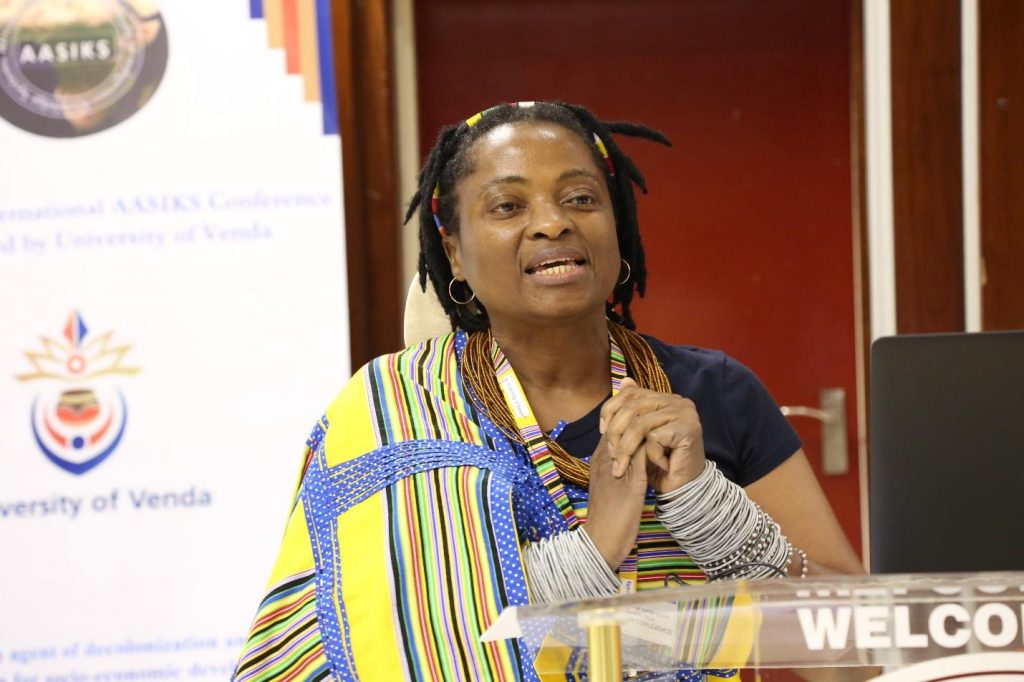 The Director of Community Engagement, University of Venda, Prof Vhonani Netshandama has been elected as the new President of AASKIS for the next two years (2020-2021). The elections took place during AASKIS AGM which was held on the 2nd day of the conference. 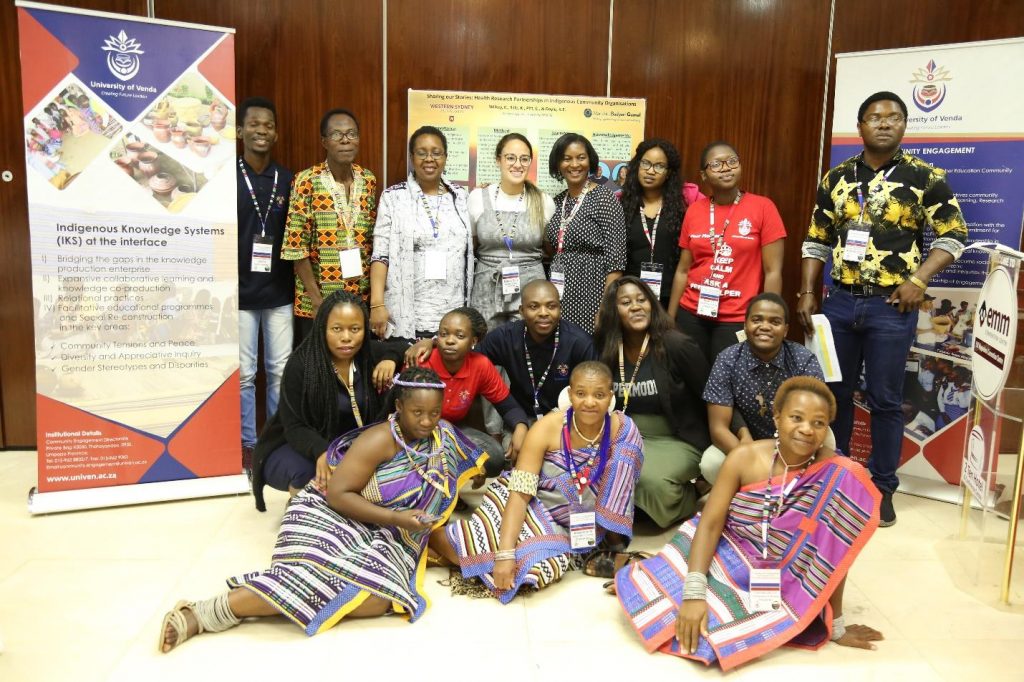 The 5th AASKIS Conference was organised by the Community Engagement Directorate at UNIVEN.