The University of Venda (UNIVEN) won the Golden Arrow award, the highest award in the category of institutions of higher learning, during the PMR.africa Limpopo Provincial Survey Business Excellence Awards. The awards are the culmination of a research process in which companies and institutions are rated based on respondents’ perceptions. The rating has a strong focus on evaluating and measuring customer service as well as customer satisfaction. UNIVEN was competing with other Limpopo based institutions of higher learning that were doing well in their sector over the past twelve (12) months. The Excellence Awards Ceremony was held at Bradbury Estate outside Polokwane on Wednesday, 13 October 2021. 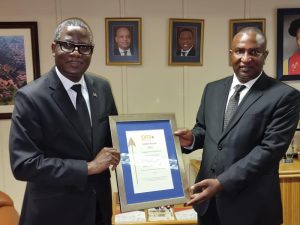 UNIVEN was rated the best institution of higher learning based on random ratings using provincial sample of 150 respondents comprising of Chief Executive Officers, Managing Directors, Company Directors and Managers including senior government officials based in the Limpopo Province. The award was received by the Director Marketing, Branding and Communication, Dr Takalani Dzaga, on behalf of the University Vice-Chancellor and Principal, Dr Bernard Nthambeleni.

“We are extremely happy to receive this award. It is nothing less than an absolute honour. We thank PMR.africa and all those who participated in the survey for this prestigious recognition. I have no doubt that UNIVEN community will live up to the level of success this award demands”, Dr Dzaga said when receing the award.

“UNIVEN is honoured with this Golden Arrow award because of teamwork from all staff members whose intention is to position the university for impact and relevance. I treasure this award as a precursor to greater achievements that lie before us as the university. I attribute the university’s success to the diligence of all our strategic stakeholders and their accommodating nature. I would like to thank all staff and students for their unfaltering commitment in the future we aspire to build,’’ The University Vice-Chancellor and Principal, Dr Bernard Nthambeleni said during his interview with Nendila newsletter.

Dr Nthambeleni concluded by urging all staff members to continue working towards achieving the university’s four strategic thrusts and 15 strategic objectives as outlined in the Strategic Plan 2021-2025.