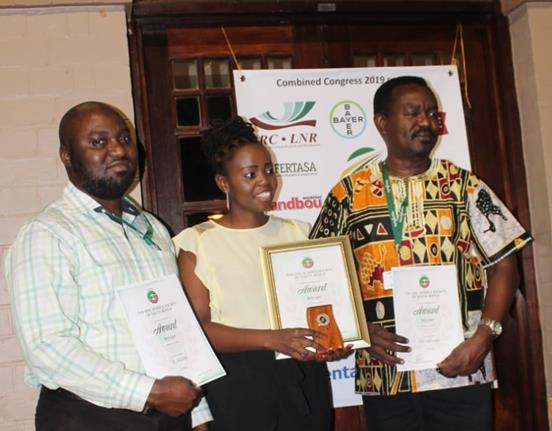 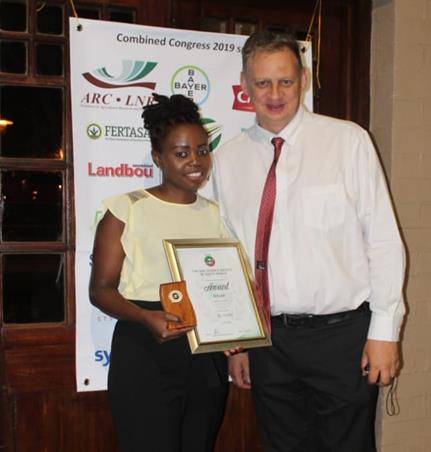 The award compromised of a framed certificate, a medal and cash prize that were handed to her during the gala dinner on the final evening of the congress. The Department of Soil Science and Plant Production congratulated Ms Lusiba for representing the School of Agriculture, as this is her second award from the Society. She received the best poster award during the 2015 Combined Congress that was held in George.

The congress was attended by more than 300 delegates from public institutions and private sector across the country. Presentations included oral and poster sessions of which hundred and thirty (130) delegates presented oral and ninety-eight (98) delegates presented posters in four concurrent sessions. The Combined Congress was graced by the presence of Prof. Danie Vermeulen, Dean of the Faculty of Natural and Agricultural Sciences (UFS), who delivered a keynote address and eminent scholars in the field of horticulture; Prof Umezuruike Opara (SASHS), Soil Science; Prof Rattan Lal (SSSSA), crop production; Mrs Desiree van Heerden (SASCP) and weed science Mr Leonard Oberholzer (SAWSS).

Ms Siphiwe Lusiba (Middle) with the promoter, Prof JJO Odhiambo (Univen) on her left side and co-promoter Prof R Adeleke (University of North West) on the right