The School of Law through the Department of Private and Mercantile Law organised and facilitated yet another successful Corporate Governance related Workshop/Training. The workshop focussed on the drafting, interpretation and or amendment of a company’s Memorandum of Incorporation (MOI). The workshop was specifically organised for and at the request of the Board of Directors of a non-profit company, namely Nwanedi Agri-Hub NPC, and it was held at Sand River Resort, Musina on Tuesday, 25 May 2021. This Corporate Governance Training was attended by all Nwanedi Agri-Hub NPC Board of Directors including a representative of the Department of Agriculture, Vhembe.

Two previous workshops were held following an invitation to the School of Law by Timbali Technology Incubator (Timbali), a non-profit company (NPC). Timbali, through government financial support, developed and operated a mentorship model programme for the Nwanedi Small Hold Commercial farmers to create for them a sustainable commercial farming model that has direct market access. In the process, Timbali successfully built a multimillion-rand packhouse for the benefit of the Nwanedi Local Commercial farmers. The aim of the packhouse is to bridge the gap between the farmers and the market through reputable and reliable operational mechanisms. 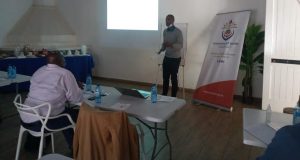 The need for the workshop was owing to that Timbali, who previously administered the Nwanedi Packhouse on behalf of the local farmers, were finalising the handing over and or transfer of the Nwanedi Packhouse to the newly incorporated and now operating Nwanedi Agri-Hub NPC, which has already started administering the Packhouse for the benefit of local farmers. The School of Law in 2019 at the request of Timbali, trained several Nwanedi local famers on issues of corporate governance in anticipation of some of them becoming board members of the newly formed Nwanedi Agri-Hub NPC, and this was done to ensure the smooth running of and sustainability of the NPC.

The Nwanedi Agri-Hub NPC Board undertook to make use of the knowledge acquired during the workshop to amend their current company MOI to specifically fit their structure, vision, and objectives of the company. The relevant government COVID-19 protocols were observed during the workshop.