A University of Venda educational sociologist and former acting Dean of the School of Education, Professor Tawanda Runhare has published a book that should have an impact on the study of education in postcolonial Africa. The 424-page book, published by Oxford University Press Southern Africa (OUPSA) is titled Sociological Foundations of Education in Africa: Perspectives, Contexts and Contemporary Issues. The volume is co-edited by Professor Runhare and Professor Pesanayi Gwirayi, former Director of Research and Postgraduate Studies and Educational Sociologist at Great Zimbabwe University, has chapter contributions by scholars drawn from higher education institutions in 6 African countries; Eswatini, Kenya, Namibia, Nigeria, South Africa and Zimbabwe, as well as a Kazakhstani-based academic of African descent. Of the sixteen (16) chapters in the book, 6 are written by four (4) University of Venda academics, namely Professor Takalani Samuel Mashau, Dr Willard Munyoka, Professor Ratau John Monobe (retired) and the book editor Professor Runhare. 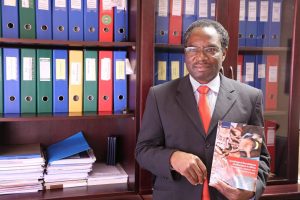 Professor Tawanda Runhare displaying a book that was recently published

Major objective of the book is to challenge the dominance of Eurocentric sociological epistemology by employing Afrocentricity as a liberatory, revolutionary and theoretical instrument for critical analysis of education in African settings and from African perspectives. In this respect, the ideas of Afro-centric and African scholars such as Marcus Garvey, Molefi Kete Asante, Martin Carnoy, Walter Rodney, Chidozie Chukwuokolo, Julius Nyerere, Ngugi wa Thiong’o, Clement Tsehloane Keto (South African) Mualana Kerenga, and Thabo Mbeki’s vision of an ideal African, complement each other to contest the Eurocentric sociological study of education which is prevalent in most African universities and colleges. In South Africa, this book has come at the right time when the teacher education landscape is undergoing profound change in its design and curriculum.

Anchored on infusing African theoretical, conceptual and contextual propositions on the study of education in the continent, the book consists of four parts; sociological perspectives on education, education as an agent of socialisation, contemporary issues on education in Africa, and education and development in Africa. Of interest to South Africa is the section with a chapter on a case study of how funding models of South African education led to higher education students’ demand for transformation, which sprang to the #FeesMustFall protests of 2015 and the wide-ranging demand for radical transformation in the country’s higher education policies, practices and the curriculum. Other important aspects that come to fore in one section of the book include decolonisation and africanisation of education, impact of quantitative expansion or the ‘massification’ of education in Africa, the application of information and communication technologies (ICT) and impact of the fourth industrial revolution (FIR) on education.

Commenting on the book in its foreword, Professor Saloshna Vandeyar, Director of the Centre for Diversity and Social Cohesion at University of Pretoria said he has no doubt that this book will become influential and widely be used wherever discrimination and inequality still determine educational outcomes.

Dr Nomkhosi Nzimande of the University of KwaZulu-Natal said that, “having a sociology of education book written with an African perspective in mind is necessary in this era flooded with discourses of decolonising and Africanising the curriculum”.

Recently, on the announcement of the book publication at the Research and Publications Committee (RPC) meeting by Professor Bongani Bantwini, the Executive Dean of the Faculty of Humanities, Social Sciences and Education; Senior Professor Georges-Ivo Ekosse, the Director of Research and Innovation added that this is an important academic development that we should shout about as it puts UNIVEN on the map in higher education.

The University of Venda congratulates Professor Runhare and the team for this academic accomplishment, which was supported by the internationally reputable publishers, Oxford University Press. 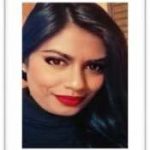