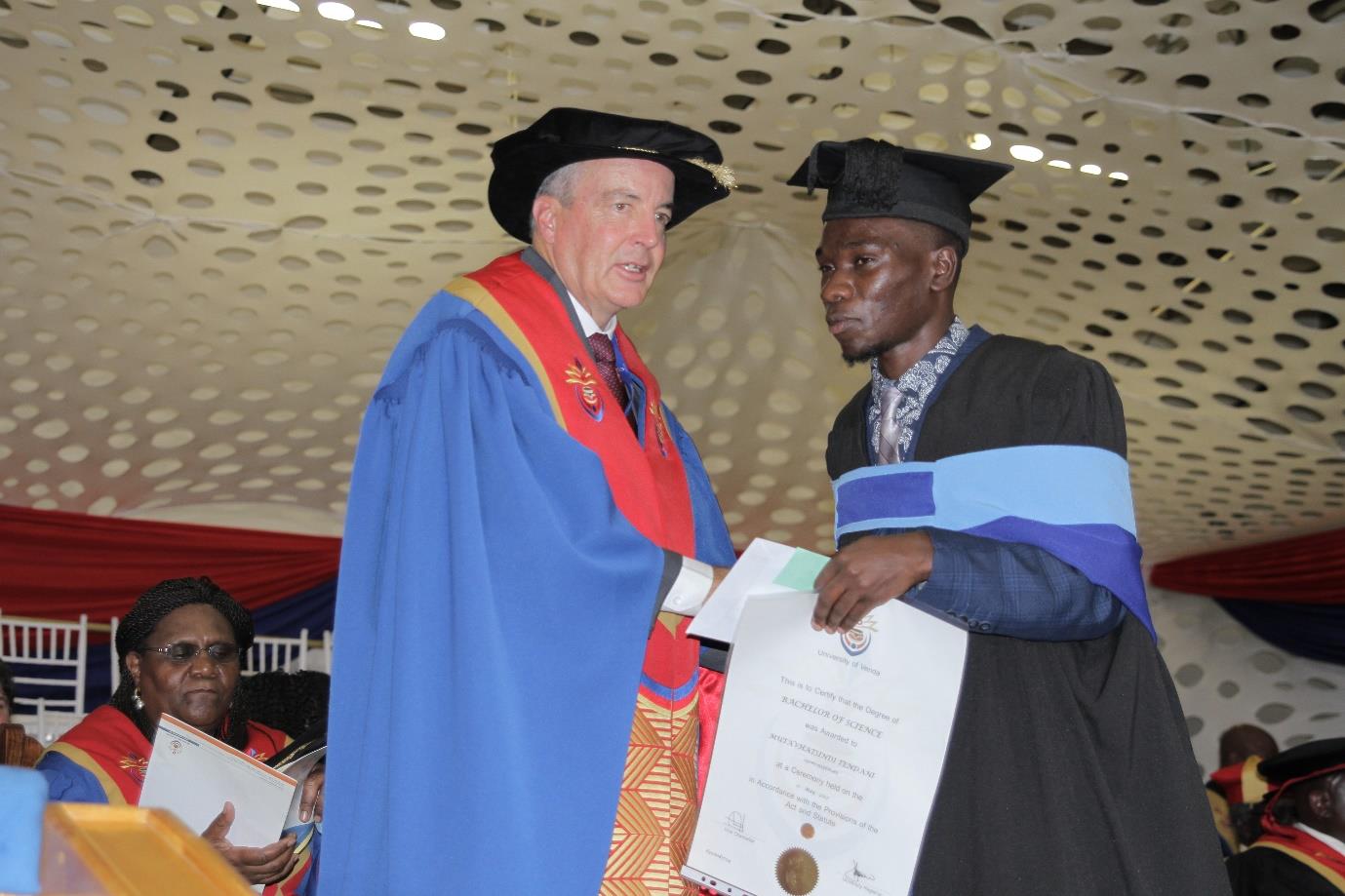 During these Autumn graduation ceremonies, against all odds, we have witnessed two physically challenged graduates Mosa Boshielo (Bachelor of Arts in Development Studies) and Mpho Sekgweni (Bachelor of Commerce in Business Information Systems) who graduated regardless of their physical challenges.

Some of the highlights were a 78 years old Neluvhalani Matshikiri graduating a PhD in African Studies, Chikuruwo Rufaro Emily from the School of Law scooping six awards, a Senate Gold Medallion and she was the 2017 Univen best overall student, Mr Vincent Demana, an English Lecturer in the School of Human and Social Sciences who graduated Masters degree in English with distinction. Mr Ndivhuwo Victor Goliada, a staff member in Committee Administration graduating his Masters degree in Criminal Justice.

“Sadly, the current generation of leaders globally seem to have failed to change the world for the better,” said Prof Crafford. He further expressed that, poverty, inequality, prejudice and intolerance, violence against women and children have not changed, and in fact, appears to be getting worse, in a world crying out for ethical and principled leadership. “We send you, our graduates out into this world, and we implore you to be agents of change we so desperately need.”

Prof Crafford expressed that the University management is pleased to see more than 20 present and past Student Representative Council leaders, not only graduating, but also being rewarded for academic excellence. He said, “SRC President Shikwambana, the leadership task of the SRC is indeed also to make education fashionable and to lead by academic example”. He congratulated the student leadership and wished them well in their academic endeavours.

He advised the audience not to underestimate the challenges that the graduates of today are facing when they enter the workplace under current economic conditions and with the worsening of South African economic prospects. Prof Crafford further said graduate unemployment is rife, and he encouraged the audience to start thinking differently about the world of work and how parents and tertiary institutions prepare students for it. He also said that, small business developments are proven ways to decrease unemployment and increase economic growth, and our graduates will be challenged more and more to find ways in which an academic degree can lead to self-employment. “At the same time, Univen will be increasingly challenged to adapt not only the content of our curriculum, but also its mode of delivery, so that we prepare our students for a rapidly changing world in which our current notions of work and employment are being turned upside down.”

Prof Crafford further told the audience that the knowledge-driven economy envisaged in the National Development Plan is struggling to emerge, “but our economic future is bleak if we do not embrace it and work increasingly hard to achieve it,” said Prof Crafford.

Crafford applauded graduates and told them that South African Citizens’ hope future lies in their hands. He further told them that their achievement is remarkable success and society looks up to them as the innovators, employers and leaders of the future. “We are very proud of you and we are confident that you, as graduates of the University of Venda, will be able to hold your heads high amongst your peers and outshine them in the workplace. We congratulate you, and we wish you great success in your future careers,” He concluded.

Amongst the dignitaries who attended the graduation were the Minister of Public Administration, Honourable Faith Muthambi, Executive Mayor of Vhembe District Municipality, Cllr Florence Radzilani, Mayor of Thulamela Municipality, Cllr Avhashoni Tshifhango, Senior government officials and sponsors of the graduates.

The University of Venda would like to thank all the sponsors who made it possible for students to be where they are today.