Churches must play their roles and save souls within communities 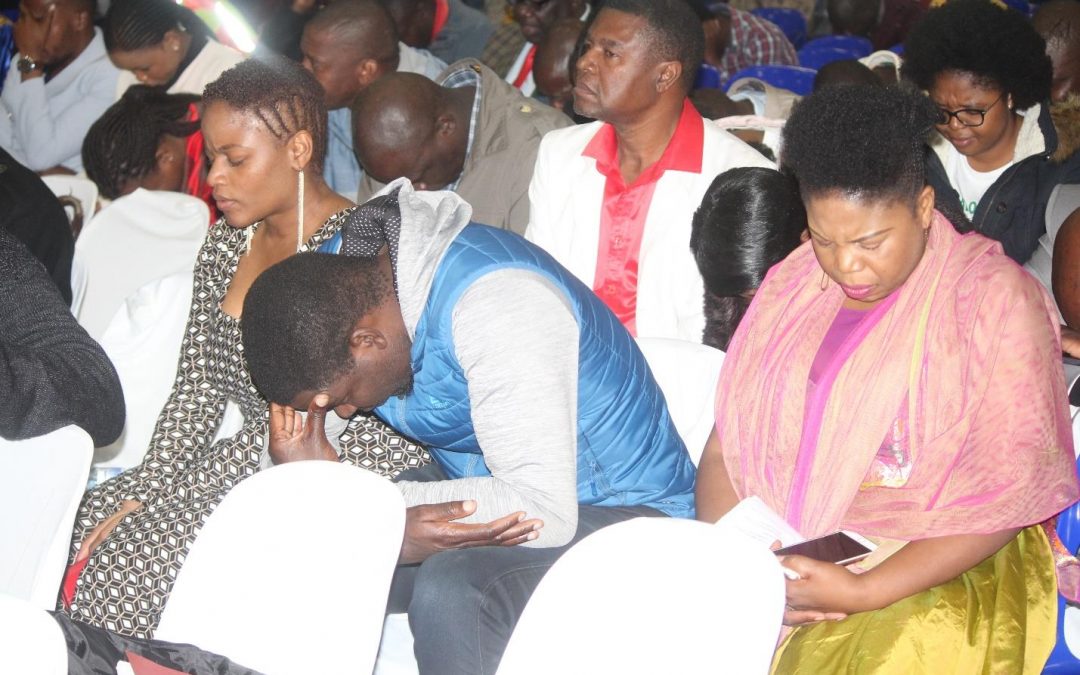 “Churches must play their original role of saving souls not material prosperity” said Dr Tshifhiwa Muligwe during his keynote address on the ‘Heal Our Land’ prayer event held at the University of Venda on Friday, 16 June 2017. The heal our land prayer event was an initiative organised by the University of Venda, Churches and community leaders to pray for the evils of ritual murders, rape, domestic violence and missing persons in the country.

Dr Muligwe during his keynote address at the Heal Our Land prayer day.

“Crime is a spiritual issue and needs to be prayed for. When the devil uses you, you have the power to deny his actions because the truth of the matter is that, everyone has the power to deny the spirit to lead them in to the wrong doing actions. Therefore, fix your spirit and your mindset,” he added. Dr Muligwe further indicated that people of God have off ramped to devil’s ways and need the intense involvement of redeeming their souls through churches. He further said that, they are to be blamed as churches for most of men in our prisons and many domestic, ritual and rapes. He maintained that instead of saving souls through crusades and more, “we are relaxed and enjoying comfort of beautiful cars and wealth. We have been given a mandate from God to lead people to him and remind them of that they were born of Him and crime doesn’t pay,” Dr Muligwe added. He concluded by urging church leaders to lead by example and to save the people who are known to be problematic within communities.

Prof Nesamvuni welcoming the audience to the event.

During his welcome address, the University Registrar Prof Edward Nesamvuni, on behalf of Vice Chancellor and Principal, Univen Senior and Executive Management students and support staff said, “As a University, we are not immune from communities that experience good or bad. Our Senate and Senior management have expressed themselves on matters of ritual killings, abuse of women and children, and crime to our students”. He said that the University cannot be a University without its immediate communities.”

Respect women because they are our mothers – Thovhele Gole Mphaphuli as he addresses the audience in the Auditorium.

The event was also graced by royalty Thovhele Gole Mphaphuli on behalf of Khosikhulu Vho Toni Mphephu Ramabulana. He saluted the churches for attending to the event and urged them to continue to pray for all criminal activities to stop within communities. He further urged churches to work with community leaders to reinstate people’s morals and advised the audience to bring forward, the evidence of criminal activities to police, royalty and civic associations.

Representing the South African Police Service (SAPS), Major General Azwihangwisi Mulaudzi gave the shocking statistics of resolved and unsolved murder, rape, domestic violence and missing people’s cases. She indicated that most cases of murder happen because people walk alone at night, others from hitch-hiking while others are caused by drunk people. She said, Thohoyandou Police station alone have 65 murder cases, 30 missing persons, 96 domestic violence and 242 rape cases reported since the beginning of 2017. She urged members of the community to tell their friends and families about their whereabouts. She also highlighted the fact that young people between the ages of 18 to 27 form the highest percentage of missing persons because they never tell others about their whereabouts. She further urged members of communities to report criminal activities and provide enough evidence during investigations.

Mr Phaswana, representing the Council of Churches said that the emergence of false prophets has caused a huge challenge in this era. He maintained that false prophets are for wealth and not for the saving of souls. He said that they mislead people about certain rituals which involve ritual killings, raping of children and so on. He urged community members to believe in God.

Dean, Dr Rannditsheni prays for all evils to go way during the event.

Dean Dr Alunamutwe Rannditsheni offered general prayer during the event while Dr Maxwell Masakona prayed for all to rember their roles in the family and become responsible men and women in their homes. Pastor Tshabuse advised young people to stay at home at night and told parents to continue guiding their children. Mrs Humbelani Netshandama urged women to be financially sustainable and work hard.
The event was also graced by the presence of several entertainers such as Taki and Rofhiwa, Maduvha Madima, Khathu Mathivha, SAPS Band and different church choirs. It was also attended by traditional leaders, pastors, academics, youth, Muvhango actors and actresses and members of the community.

The event in pictures: