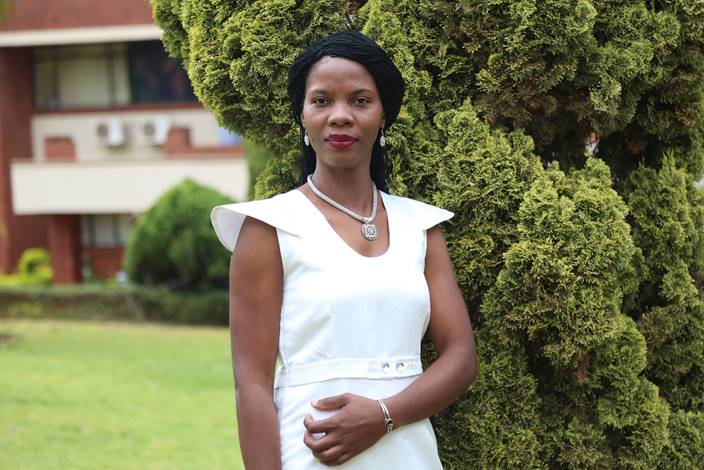 Being born in Giyani and failing and repeating Grade 12 did not move Ms Dephney Mathebula. On Friday, 21 September 2018, Ms Mathebula will be graduating her Doctoral degree at the University of Venda (Univen). Ms Mathebula broke the record at Univen by becoming the first female South African to obtain a PhD in Mathematics and the first person to obtain PhD in Mathematics in Muyexe Village where she was born.

“Whilst I was still doing honours, I got an opportunity to attend a workshop in Cape Town at the African Institute of Mathematical Sciences (AIMS) where applications of Mathematics in real life (Biomathematics) were introduced. After the workshop, I was awarded with National Research Foundation (NRF) bursary to pursue my second Honours degree in Biomathematics at Stellenbosch University in 2009 of which I graduated in 2010,” said Ms Mathebula.

Ms Mathebula was born in 1983, 05 December in Giyani. She attended her primary school at Muyexe Primary School from 1989-1995 and Secondary School at Hatlani Muyexe High School from 1996-2001. She passed her grade 12 in the year 2000 but had to repeat because she failed Mathematics (She passed with GG- not convincing marks). She then passed all her subjects in 2001.

Moreover, in 2011 she graduated for MSc in Mathematics (sponsored by NRF) at the Stellenbosch University. In 2012 she enrolled for PhD in Mathematics (sponsored by NRF) at the University of Venda. As a result of her PhD research studies, one paper has so far been published in a peer reviewed journal which was rated number three under 25 Hottest Articles in the whole world in 2014 at Mathematical Biosciences Journal. Two more articles are still under preparation. Ms Mathebula has also been able to present some of her work at an International Conference in Spain: Sixth International Conference on Infectious Disease Dynamics (EPIDEMICS6) which was held from 29th November 2017 to 01 December 2017 in Spain. She said, it took her 29 years to reach apex level of education.

Apart from doing Mathematical modelling research and lecturing, Ms Mathebula has also been involved in outreach activities that aim to contribute in uplifting young girls from rural areas to pursue careers in STEM.

Ms Mathebula further said “I would like to express my special appreciation and thanks to my ever-dynamic promoters, Prof Winson Garira and Dr Simiso Moyo for their guidance and support. A big thank you to my parents; Mr Daniel Mathebula and Mrs Dainah Mathebula for training me and making all the enabling environment conducive for my education and for all their financial support in the time past and now. May the Almighty God bless them beyond their imagination. “Le swinene swa tirheliwa n’wananga” Papa.