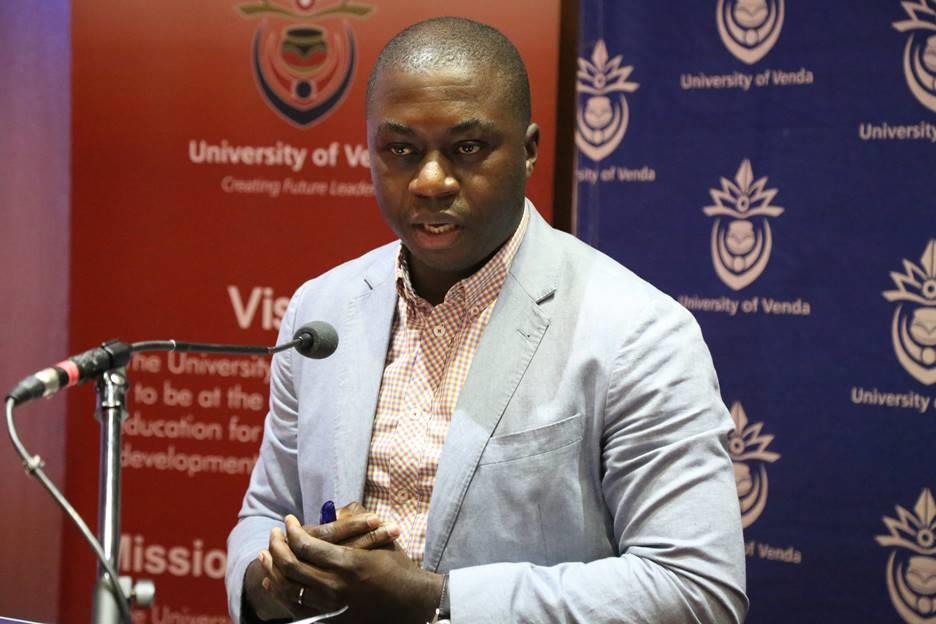 “Seeing a student dropping out because of fees unaffordability worries me.”, these are the words said by the new Chairperson of the School of Management Sciences Alumni Association, Mr Hardin Ratshisusu.

Ratshisusu was re-elected unopposed as the chairperson at the launch of the School of Management Sciences Alumni Association held on Saturday, 20 May 2017 at Burgers Park Hotel in Pretoria. During his previous term of office, he promoted student excellence through sponsoring the best student award in Bachelor of Commerce in Accounting and was instrumental in the expansion of Social Responsibility Fund concept. His rise to the Deputy Commissioner position came as no surprise as he held positions at the Competition Commission at various levels, including being a Senior Merger Analyst,
Adviser to the Deputy Commissioner and Divisional Manager in the Mergers and Acquisitions division.

In his acceptance speech Ratshisusu made a commitment to work and contribute to the University. “In this term, as a newly elected committee, we promise to produce tangible results”, added Ratshisusu.

Dean of the School of Management Sciences, Prof Armstrong Kadyamatimba telling the audience about the developments and challenges faced by the school.

The launch was attended by a high delegation from the School of Management Sciences led by the Dean of the School, Prof Armstrong Kadyamatimba and his Vice Dean, Ms. Tondani Nethengwe. Prof Kadyamatimba made a brief presentation about the developments and challenges faced by the school. He informed Alumni in attendance that the School is now offering a BCom Accounting Science degree which is SAICA accredited. Kadyamatimba told the audience that student population of the School stands at two thousand four hundred (2 400). He indicated that graduation trend within the School has been doing very well. “During the recent May graduation, we
produced 380 undergraduates, 28 honours, two masters and three PhD graduates. “With your positive intervention, surely we can make it and build bright future for our students”, concluded the Dean.

Dr Lufuno Mudzanani who recently graduated his PhD in the School of Management Sciences and a member of Executive Committee of Convocation, has encouraged the newly elected committee to be committed and be willing to transform the University through their purse. The newly elected committee was given a mandate to connect the University with the right people in order to raise funds. “You are expected to develop an action plan. Do not blame other people and companies for not coming to you to donate, you are the one who need to approach these people and companies to explain to them about the purpose and goals of your existence, then you will see better rewards,” he said.

The elections were conducted by Mr Takalani Modau, who is a member of Executive Committee of Convocation. In supporting the newly launched Association, he encouraged members to plough back to the University and work hard in order to achieve its intended goals.

The proceedings of the launch were led by the President of Convocation, Mr Levy Ndou.