A final year doctoral candidate in the School of Agriculture, Ms Francina Bopape recently discovered a novel type of soil bacterium which has huge potential for producing organic nitrogen fertilizer. Because of its novelty and significance, the finding was published by the American Society for Microbiology in January 2020. It was deemed necessary to announce the information to the international research community through the specialist scientific journal called Microbiology Resource Announcements (MRA 9(2) e01122-19). 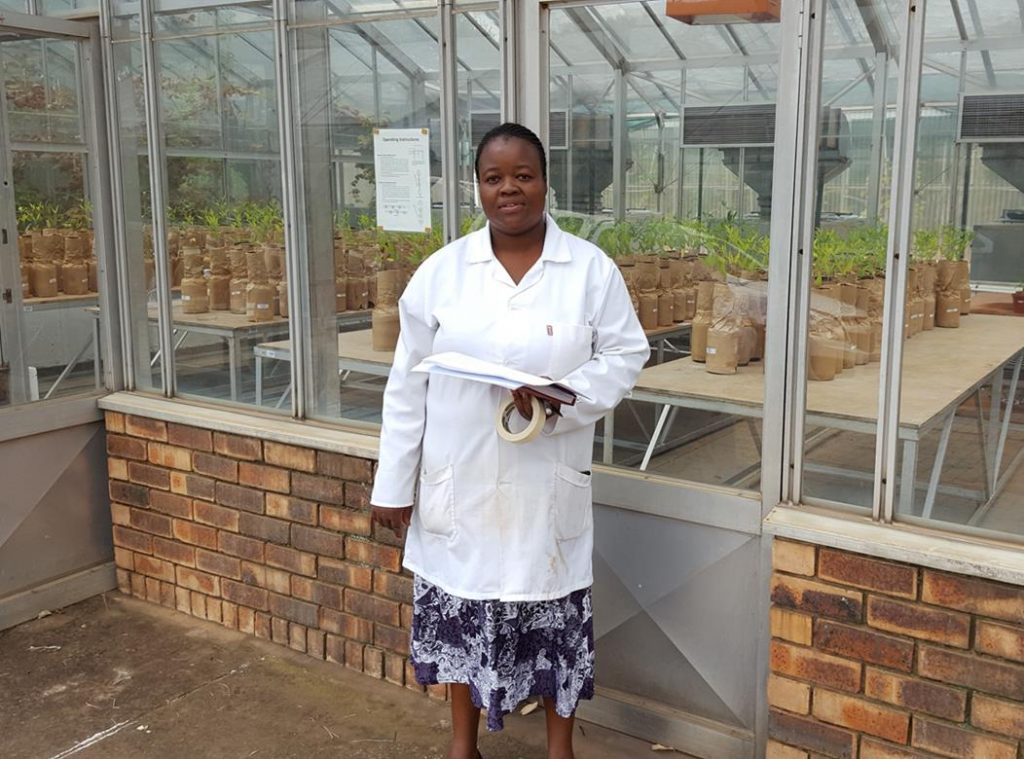 Ms Francina Bopape in front of her greenhouse at the Agricultural Research Council – Roodeplaat (Pretoria). The pigeonpea seedlings in the background were used for trapping the soil bacterial strain

Part of Ms Bopape’s research project is aimed at helping small-scale farmers who produce bean crops. Some field crops, particularly the bean types such as soybean and others are unique in the sense that they take up nitrogen gas (from the air) and convert it into nitrogen fertilizer. In general, all field crops require this fertilizer for growth and ultimately the production of grain yield. It is for this reason that farmers apply commercial chemical nitrogen fertilizer (which is quite expensive) on crops. However, the bean types of plants can circumvent the need for this expensive fertilizer if they are grown in a soil that harbors indigenous bacteria (called soil Rhizobia) which then form small round structures on the roots (called nodules – see insert) which enable the manufacturing of the organic nitrogen fertilizer by the plant. During planting, commercial farmers often mix (or inoculate) the bean seed with commercially available soil bacteria in order to enhance the subsequent manufacturing of the nitrogen fertilizer by the plants as they grow from seedlings to adult plants. This means that, farmers save on the cost of inputs for producing the crop. 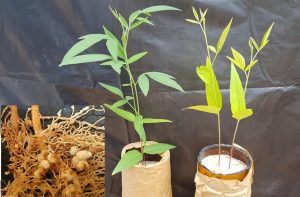 Using local soil samples, Ms Bopape trapped the indigenous soil bacteria in the seedlings of a bean type of plant called pigeonpea. She then harvested the nodules and squeezed out the bacteria in the laboratory before purifying them for the next stage that identifies the genes that are responsible for the nitrogen fertilizer manufacturing process, among other genes. Contrary to the currently available information, the novel strain of bacterium involved did not possess the common key genes found in other Rhizobia that are necessary in the process of nitrogen fertilizer manufacturing, suggesting that there is an alternative method.

The main supervisor, Prof Eastonce Gwata in the Department of Crop Science commented that, the results from Francina’s work have several positive implications particularly for bio-inoculant technology. The next step in the study is to understand the mechanism at work in the strain before attempting its genetic enhancement for the benefit of farmers.