Join the University of Venda (UNIVEN) in celebrating youth achievements in this youth month (June) of 2021. UNIVEN is celebrating with Dr Moffat Frank for his achievement of PhD in Urban and Regional Planning Degree, one of the accredited professional degrees offered by the University of Venda. At the age of 31, Dr Moffat is the first student to have started from first year and completed through to PhD ever since the Department of Urban and Regional Planning was established at UNIVEN. This also marks the first PhD candidate to graduate from this Department within the new restructuring by the University from School of Environmental Sciences to Faculty of Science, Engineering and Agriculture. 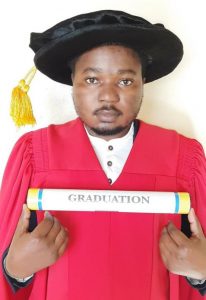 Dr Moffat narrates that this was not an easy journey, as experienced by most black students coming from disadvantaged family backgrounds. He did not let his background determine his future, “I am really grateful for the academic financial support from my supervisors, lecturers, teachers, family and the rural community I grew up in”. The African proverb, “it takes a village to raise a child” best describes the relentless efforts by several people who saw potential in me from an early age. This achievement is not mine alone and serves to inspire the youth out there not to give up in life. In 2005, at Sherenje Secondary, a school in the deep rural village in Zimbabwe, Dr Moffat became the first student to break a generational record chain of failing to pass up to 50% of registered subjects. He did not only pass all his eight registered subjects but also got 2 distinctions in Integrated Science and Technical Graphics, which was a huge success for his school. “I also give thanks to my late Maths teacher Mr Shonhiwa, who saw grains of potential and believed in me”. He said, Mr Shonhiwa took him to his place in Rusape town where he mentored and coached him in preparation for his Ordinary Level exams during the second school term of August in 2005. Dr Moffat then completed his Advanced-Level studies in 2007, at Mount Camel Secondary School, where he also pushed boundaries despite all odds and became second best student by getting 11 points out of a total of 15 points. His fees were paid out mostly through proceeds from subsistence farming, brewing and selling of traditional beer, all thanks to my grandmother ‘Conilia Mukangi’ for her bravery. Without financial means to continue his studies he could not continue to any university and opted for informal trading activities.

He never gave up on his dream to further his studies, with family support, in 2011 he got the highly esteemed Zimbabwean Presidential Scholarships to embark on his higher education studies in South Africa. He then enrolled at UNIVEN for the accredited professional planning degree, Bachelor of Urban and Regional Planning (BURP) and completed in 2014. He was also awarded with the Vice-Chancellor’s Merit certificate of academic excellence for the academic year 2013. The UNIVEN Work Study Programme aided him to pursue his studies and he completed Masters in Urban and Regional Planning (MURP) with a Distinction in 2016 from the University of Venda. Over the years he developed interest in research on small and intermediate cities as this weave through his research and publications. His BURP research was titled: Exploring revenue enhancement strategies in rural municipalities: a case of Mutale Municipality; and MURP research was also titled; Exploring the developmental paradigms of university towns: a case of University of Venda’s ‘Univen Town Concept’.

He said “I am grateful to my main promoter, Dr. James Chakwizira, my co-promoters Dr. Emmaculate Ingwani and Prof Peter Bikam for their unwavering support, guidance, patience, invaluable advice and encouragement during my PhD study. Their expertise and copious experience have made it possible for me to reach this far in academia”.

When congratulating Dr Moffat, Head of the Department of Urban and Regional Planning, Dr. Chakwizira, indicated that Moffat always showed great interest in academia, hence he has always stood above other students in examination results, class tests, practicals and group projects. All this is testimony to his intelligence, dedication and perseverance.

“To the youth, be inspired, do not let your background define your future. I was once known as an informal trader in the eyes of others and now known as Dr Moffat’’, so says Moffat.

The University of Venda Vice-Chancellor and Principal, Dr Bernard Nthambeleni congratulated Dr Moffat and all graduates for their hard work and dedication.