The University of Venda (Univen)’s International Relations Office recently hosted the Public Lecture of the Ambassador of the State of Palestine to the Republic of South Africa, Mr Hashem Dajani. The Public Lecture was held on 13 October 2017 at Univen Art Gallery. 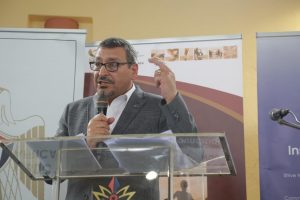 In his talk as the keynote speaker, Ambassador of the State of Palestine to the Republic of South Africa, Mr Hashem Dajani said that the situation of the Palestinian people under the Israeli occupation remains dire due to the repressive, destructive and colonial policies and practices. He indicated that Israeli continues to perpetrate Palestinians with its colonial policies in deliberate systematic and grave violation of international Laws. He highlighted that the international community continues to fail to hold Israeli accountable in accordance with the law.

He further expressed that the situation has deepened the sense of insecurity among the Palestinian people. Furthermore, Israeli continues to destroy Palestinian cities and villages and it holds thousands of Palestinians in its prisons.

Ambassador Hashem Dajani alluded that Israeli persist with its illegal and immoral blockage on Gaza, which continues to gravely impact about two million Palestinian civilians who are suffering a dire socio-economic and humanitarian crisis despite the repeated calls to end the blockage which constitutes punishment prohibited under international law. 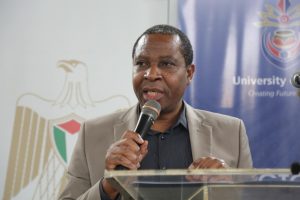 On the behalf of Univen’s Vice Chancellor and Principal, Dr Segun Obadire, the Chief Administrative Officer in the Directorate of International Relations alluded that many people have compared the ongoing impasse between Palestine and Israeli. He added that others have taken sides based on sentiments while others are indifferent even though lives are being lost. He expressed that when some of the steps were taken towards peaceful resolutions, people from all over the world were already easing a sigh of relief as Israeli agreed to compensate the Turkish citizens killed by Israeli forces.

“There should be way through peaceful negotiations and not war or violence that can bring about the much-coveted solutions to this crisis.” He further said that it is his wish and candid opinion to see this war coming to an end. Dr Obadire concluded by wishing Palestine and Israeli a fruitful deliberation and a positive outcome for the solution to the problem. 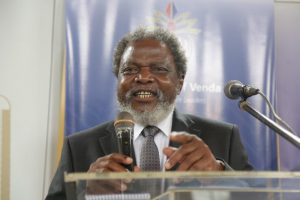 “The Israeli invasion of Palestine and apartheid settler colonialism raise important questions about the sovereignty of States,” said Former Vice Chancellor of Univen, Prof Muxe Nkondo giving his message of support on behalf of the Minister of Sport, Arts and Culture, Honorable Mr Nkosinathi Emmanuel “Nathi” Mthethwa. Prof Nkondo added that the fear of Western domination is the main concern, particularly after the disintegration of the Eastern bloc, which has created a monopoly capitalist global system controlled by the United States. He further echoed that these concerns about the threats posed by Western domination has become discursively linked to appeals for solidarity between South Africa and Palestine.

“Solidarity politics in Palestine and South Africa are ultimately an effect of global power relations and struggles in both countries located within the broader discursive economy through which global power and authority are exercised.” He concluded by saying that anticolonial social movements in Palestine and South Africa are a product of the widespread regional belief that sovereignty and self-government cannot be achieved within the Western-dominated regional order. 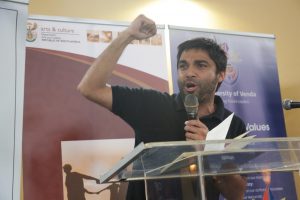 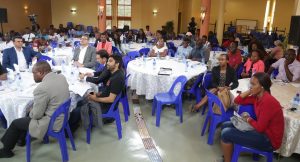 Delegates from Boycott Divestment and Sanctions Movement South Africa, University of South Africa, Palestine Embassy and Univen pose for a picture during the Public Lecture