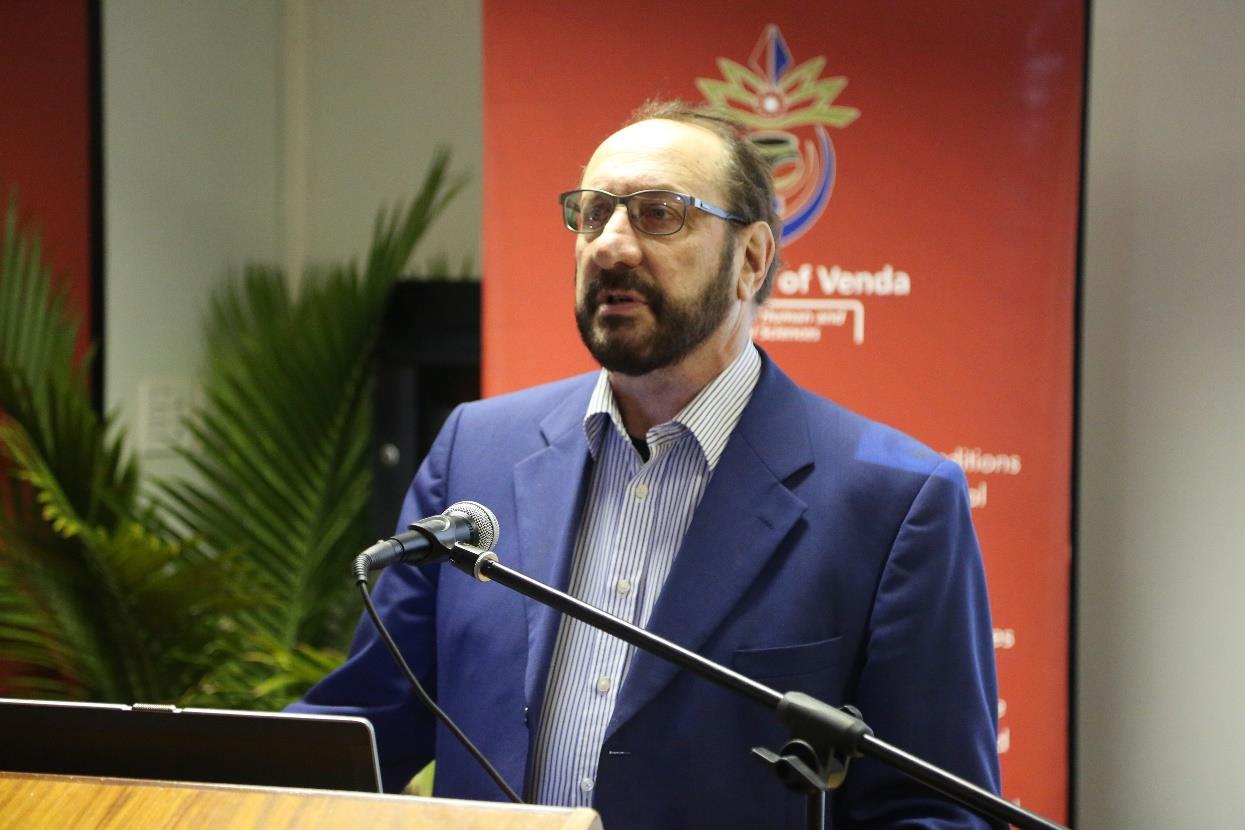 The University of Venda (Univen) Library Hall was abuzz during the School of Human and Social Sciences lecture series held from 22 to 24 May 2017.

We must have a mission to explore culturally mediated relatedness -Prof Coplan.

The guest speaker, Professor David Coplan, who is a Professor Emeritus in Social Anthropology from the University of the Witwatersrand (Wits) has been researching and writing about South African performing arts and media since 1976. He is the author of numerous publications, including most notably In Township Tonight! South Africa’s Black City Music and Theatre (1986), revised, enlarged and published as the second edition in 2007.

During the lecture series, Prof Coplan presented lectures on Nkosi Sikelel’ IAfrika and the Liberation of the Spirit of South Africa, Life in the Field: Anthropologist as Refugee, and Sounds of the ‘Third Way’: Identity and the African Renaissance in Contemporary South African Popular Traditional Music.

On the first day, during the Nkosi Sikelel’ IAfrika and the Liberation of the Spirit of South Africa lecture, Prof Coplan said that the hymn Nkosi Sikelel’ iAfrika (God Bless Africa), known as the African as well as South African national anthem, occupies a field of such experience and practice at the intersection of public religion and popular culture.

“Two decades ago, one of us wrote that “Nkosi Sikelel’ iAfrika has come to symbolize more than any other piece of expressive culture the struggle for African unity and liberation in South Africa,” said Coplan. He further exclaimed that the song’s popularity extends beyond the borders of South Africa and the confines of the liberation struggle that it so actively animated.

Prof Coplan further added that Nkosi Sikelel’ iAfrika was composed as a form of blessing, and the hymn offers a message of unity and an exhortation to act morally and spiritually on behalf of the entire African continent.
On the second day, the lecture focused on Life in the Field: Anthropologist as Refugee. Prof Coplan said that anthropology is about social relationships and their representations. “We must have a mission to explore culturally mediated relatedness”. Prof Coplan further said that graduates in anthropology must bring their deeper understanding of structure and agency to their research.
The third-day lecture focused on Sounds of the ‘Third Way’: Identity and the African Renaissance in Contemporary South African Popular Traditional Music. Prof Coplan said that piracy is a huge problem in the music industry and so far, nothing can be done to combat it.

“Once a Pirate always a Pirate,” says Prof Coplan when asked about Hlaudi Motsoeneng’s 90% of SABC radio stations’ concept by Prof Geoff Mapaya. Prof Coplan further said that the people like what they like, that approach can never stop people from listening to international music, they can simply divert and play music from their memory sticks. Prof Coplan further said: “The activity of supporting local content starts within the inner self. If people are not willing to buy, then there is nothing to make them buy local music. We just need someone to educate them about the importance of buying and supporting local music.”
“Please allow us to leave this music career with you. Do not disappoint us, just be ready to grab what we are teaching you and do proper research. Africans produce good music, but our people do not support it; instead, they pirate it,” Prof Coplan added.

A Doctor of Philosophy (PHD) student in African Studies (specialises in Music), Thulani Zulu, was alive during the lecture. He said: “I think the other contributing factor is the language that our people use when singing.”
In his response to the comment, Prof Coplan said, “language usage is not the issue because in the past we had experienced artists like Brenda Fassie and Ladysmith Black Mambazo who used to score big whenever they released albums.”

Coplan further said that the biggest challenge is the introduction of Internet. “America has advanced internet usage, but piracy is not as worse as in Africa. We need to educate our societies about these challenges that are bothering us. If there is enough funding for music in our country, we will have good music,” Prof Coplan added.
He said that the purpose of the lecture series was about brotherhood that he has with Univen. “I want to support my colleagues at Univen and to spare the debates that are going on and to inform myself about what is going on at Univen,” Prof Coplan added.

Prof Coplan is also a specialist in the ethnographic history and performance culture of the Basotho of the southern part of Africa. His related works include in the Time of Cannibals: The Word Music of South Africa’s Basotho Migrants (Chicago 1994), and the film Songs of the Adventurers (Constant Spring Productions 1986).

He frequently talks on South African radio stations and appears on television as an art, culture, and media commentator. He has also written extensively for the popular press and a general readership beyond academic publishing. He frequently lectures on media issues at scholarly conferences, to the general public, and to the private sector.