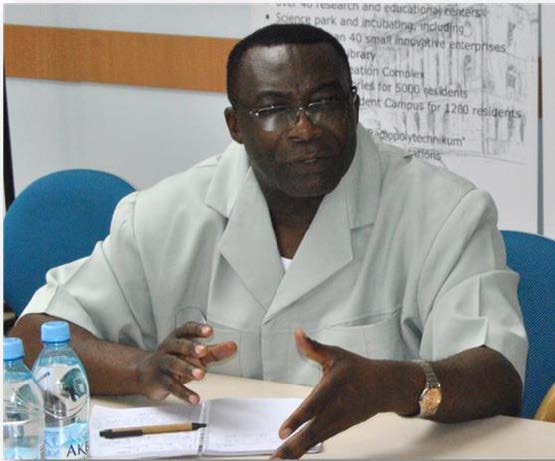 Professor Georges Ekosse PhD, DTech, FAAS, UNIVEN’s Director Research and Innovation, who has been a Full Professor of Applied Clay Mineralogy and Environmental Geology since 2008, has been promoted to Senior Professor in the same field of specialisation. Senior Professor Ekosse is Fellow (2009-), Governing Council Regional Representative for Southern Africa (2009-2014) and Secretary General (2014- 2017) of the African Academy of Sciences (AAS) & Member of its Advisory Committee on Space, Earth and Environmental Sciences (2014-), and its Management Committee (2014- 2017); Life Member: Geological Society of Africa (GSAf), 2007- and Life Member: Association of Geoscientists for International Development (AGID); Member of the International Academy of Environmental Sciences (IAES) and Member of its Scientific Committee, 2012; Member of Soil Science Society of Southern Africa (SSSSA), 2006 -; Member, International Association for the Study of Clays (AIPEA), 2004-; and Member of the Southern Africa Research and Innovation Management Association (SARIMA), 2002-. He has also been Member of the Southern African Institute of Mining and Metallurgy.

He has over 25 years of tertiary teaching and professional experience, and more than 10 years of university senior management experience. Senior Professor Ekosse has received several national and international scholarly accolades and awards. He is a National Research Foundation (NRF) C2 rated Researcher 2007-2012, 2013-2018; Adjunct Research Professor, Masinde Muliro University of Science and Technology (MMUST), Kakamega, Kenya, 2015 –; Deputy Chairperson of the Limpopo Research Forum (LRF) 2013-; among many other responsibilities within the Higher Education; and Science, Technology and Innovation Platforms both nationally and continentally. Prior to his appointment as Director of Research and Innovation (Responsible for Research, Innovation & Technology Transfer, and Postgraduate Studies) at UNIVEN, he was Director of Research Development, Walter Sisulu University (WSU), and the Maiden Coordinator of Geology, Mining and Minerals Programmes at University of Limpopo. He has equally held other positions in Botswana, Cameroon, Nigeria, Senegal and USA.

Senior Professor Ekosse is very passionate in the mentoring and promotion/supervision of colleagues and postgraduate students for which he has trained many; and some have become NRF rated researchers and/or professors. Presently he is promoting four PhD and supervising six MSc students. He has attracted and managed more than 40 different research and research management grants; and is the Project Leader of the International Geosciences Program (IGCP) of the UNESCO/IUGS/IGCP project 545: Clays and Clay Minerals in Africa, 2007–; and NRF sponsored Projects on Cretaceous-Tertiary Kaolins in Africa; Trends of Recent Transformation of Landscape based on Rocks and Soils Data: Mineralogy, Geochemistry and Geography (SA-Russia); Inclusive Innovation of Indigenous Usage of Soils and Clays within Traditional Africa; Human and Enzootic Geophagia in Southern Africa; the African Clays and Clay Minerals Research Group; and TIA sponsored Project on Geophagic Infusion and Geophagic Bar. A Scholar par excellence, he has more than 300 publications which include 4 books; 10 book chapters; 142 peer reviewed journal articles; 55 refereed articles in conference/workshop proceedings; 60 conference/workshop/seminar papers; six technical reports; one article in popular magazine; five edited works; two published book reviews; five articles in non-refereed journals; and 20 posters.

The realisation of UNIVEN’s Strategic Objective 3: Advancing the Research and Innovation Mandate as stipulated in the University’s Strategic Plan for 2012 – 2016 has annually gained higher grounds of achievement under the leadership of Senior Professor Ekosse; particularly in the areas of Advancing Research and Innovation Mandate; Research Administration and Data Management; Postgraduate Studies; Technology Transfer; Linkages, Partnership, Internationalisation and Community Engagement; and Financial Sustainability. UNIVEN was allocated a total of 271.63 units for research publications output for 2015 reflecting an increase of 44.12 units from the 227.51 units awarded for 2014. In 2012 UNIVEN had only 127.85 units. The number of NRF rated researchers has increased from 14 in 2012 to 27 currently. The university has also experienced very notable growth in numbers of Professors Emeriti, Adjunct Professors, Visiting Professors and Postdoctoral Fellows. More staff and students have been supported to attend conferences than before his arrival at UNIVEN. The university is enjoying very significant increase in registered research projects which are very well executed. Research collaborations and networks have positively expanded, and geometric growth of masters and doctorate graduates recorded. Several workshops, conferences and seminars are being organised with the primary objective of implanting a very strong research culture at UNIVEN. It should also be noted that he has built the Directorate of Research and Innovation from one contract staff to its current setting of 18 wherein through proposals he crafted and received funding from DHET, NIPMO and NRF, for support of six of the positions.

Issued by: Department of Communications and Marketing
University of Venda
Tel: 015 962 8525
[lastupdated]