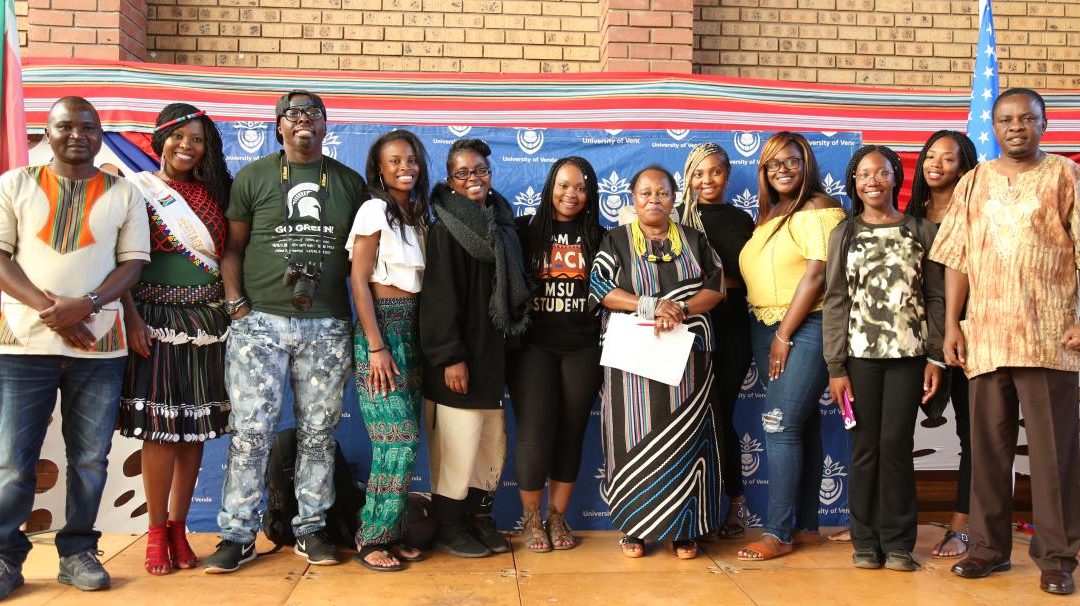 Addressing the audience during the Vatsonga and Vhavenda cultural heritage symposium that the University of Venda’s Institute for Rural Development and Murongwe Enrichment Projects jointly organised, the South African Heritage Ambassador, Ms Tando Songwevu, said that the purpose of her visit to Univen was to pay homage to this historical event. She encouraged the audience to form part of history and heritage in the discourse of decoloniality, especially decolonising the university. “There is a need to promote cultural activities and heritage so that our tradition and culture can flourish. We continue to try to decolonise the modern culture that is making our history fade away,” she added. The event was held on 5 June 2017 at the University of Venda (Univen) Sports Hall.

Ms Tando Songwevu encouraged people to go back to the traditional way of doing things and respect African culture.

The Heritage Symposium was attended by among others a team comprising eight students from Michigan State University (MSU) and their faculty advisor, Dr Joy Coates, who accompanied Ms Songwevu to learn about the Vatsonga and Vhavenda heritage.

This visit was part of MSU students’ research tour designed to build their own understanding of the Vhavenda and Vatsonga cultures. The more than 100 participants in the heritage symposium also included traditional leaders and indigenous knowledge holders from Njhakanjhaka and Davhana traditional authority areas as well as some operating within Makwarela and Thohoyandou, postgraduate students and staff at UNIVEN.
“To all the ambassadors of indigenous knowledge systems we must always turn to our resilience with which we are bequeath. We must continue to become the embodiment of democratic values and be the symbolic code for the total liberation for all negative perceptions about who we are. African unity is what the western powers fear the most as it is considered a threat to their interests in Africa. We need to continue to build cultural knowledge exchange programmes with the diaspora.”

She further said that there was a need to keep on sharing ideas in order to develop best practices and techniques to preserve cultural heritage, cultural awareness and cultural understanding with the focus on knowledge production and sharing. “As the world develops and evolves it is essentially important that young scholars from the African diaspora are made aware of their African roots and issues around culture and spirituality. Let us feed the youth of today with the knowledge which we want them to take to the future. Let us bring back our black pride. Black people are the best assets in Africa,” she concluded.

Prof Joseph Francis said that it is important to preserve culture for generations to come.

The Director of the Institute for Rural Development, Prof Joseph Francis, whilst officially opening of the symposium, highlighted the need for preserving culture for generations to come. He said the upcoming generations might eventually only read about their roots and culture in history books, if we do not take action.

The theme of the event was: ‘A Peak at our rich Vatsonga and Vhavenda heritage.’

“The purpose of this event is to try to showcase our indigenous foods, music and dance, healing, customs and traditions. This day is very significant to us. It is one of those very rare occasions when we bring the composition of people that is before us now to showcase what we are made of,” said Prof Francis. He further advised the audience not to wait for people from abroad in order to organise events of that nature. “The only hope that we have is that we can continue to preserve it for generations to come. Today is about connecting and sharing what we have in terms of our heritage as Vatsonga and Vhavenda,” he concluded.

Ms Pertina Nyamukondiwa, a PhD student at UNIVEN, said totems created social integration among people and should be kept as such for future generations.

While clarifying the organisation of the exhibition and symposium, Ms Pertina Nyamukondiwa, a PhD student at Univen, centred her talk on the significance of totems. She defined a totem as a symbol used as an emblem for a certain group of people such as a family, clan, tribe or lineage. She further said that totems were still used to recognise the achievements within their families or
communities. One example could be “If you have a good harvest in a community or having many wives,” she added. Ms Nyamukondiwa revealed that every totem had its own praise poem. “The taboos for a totem are that you are not allowed to marry someone if you share a totem because you are regarded as relatives, even though you are not blood relatives,” she said. Expanding on this issue, she pointed out that, “once a family has identified an animal as its totem, it will be its responsibility to take care of it and make sure that they do not eat or kill it, or else they will experience not so good news in their life. That meant people would take care of their animals and prevent killing of animals. It created respect among people and social integration.”

Hadiya Knight from Michigan State University fitting the clothes that were on display as part of exhibiting and showcasing African culture.

Hadiya Knight, a Bachelor of Arts in Music third year student at Michigan State University, said: “I have learnt a lot about South African clothing, culture and indigenous foods.” She said now she knows a lot about the South African way of living. In addition, for her the food was mouth-watering and very different from the one she consumed in the United States of America (USA). “I also enjoyed the natural landscape,” she concluded.
Mrs Florence Muthige said she benefited a lot from this event because many people bought her products.

For Mrs Florence Muthige, one of the exhibitors from Makwarela, the event provided her with a unique opportunity to sell her products. “If I was at home, I was not going to make this money that I have made today. This event was a lifesaver and I wish the University can organise this kind of events more often,” she added. The home made products she exhibited and marketed included: minwenda, gwana, musisi, Venda dolls, decoration balls and beadwork.

African pots on display at the venue where the symposium was held.

Some of indigenous African foods on display during the heritage symposium.

A Michigan State University student (Far left) looking at Venda indigenous dolls that were on display.