On Thursday, 03 October 2019, the University of Venda (UNIVEN)’s School of Law, Department of Criminal Justice in partnership with Limpopo Provincial Department of Transport and Community Safety hosted a Crime Prevention Seminar to assist the Provincial government in the review of the provincial crime prevention strategy and to further determine possible and effective measures in the prevention of crime. This Crime Prevention Seminar was held at the University’s Auditorium. 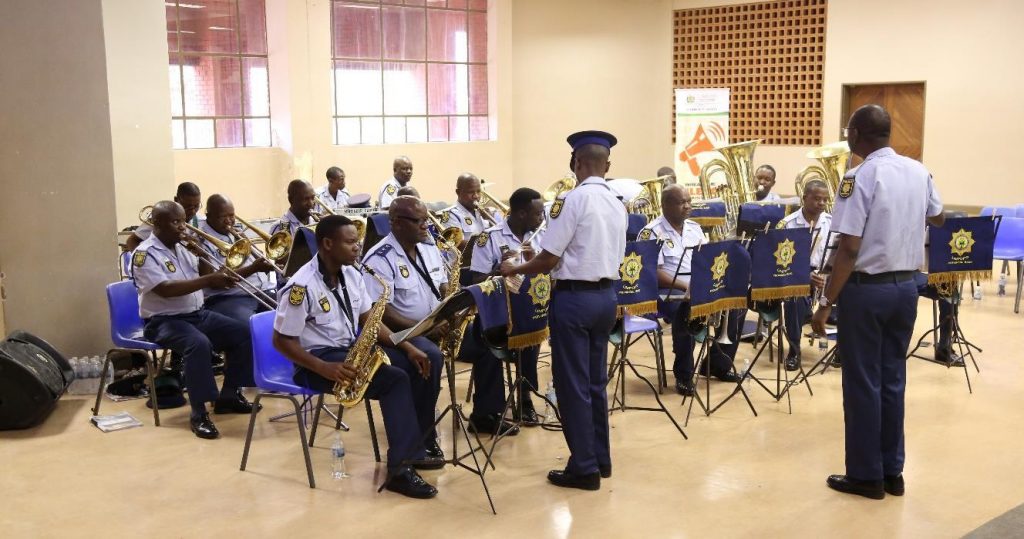 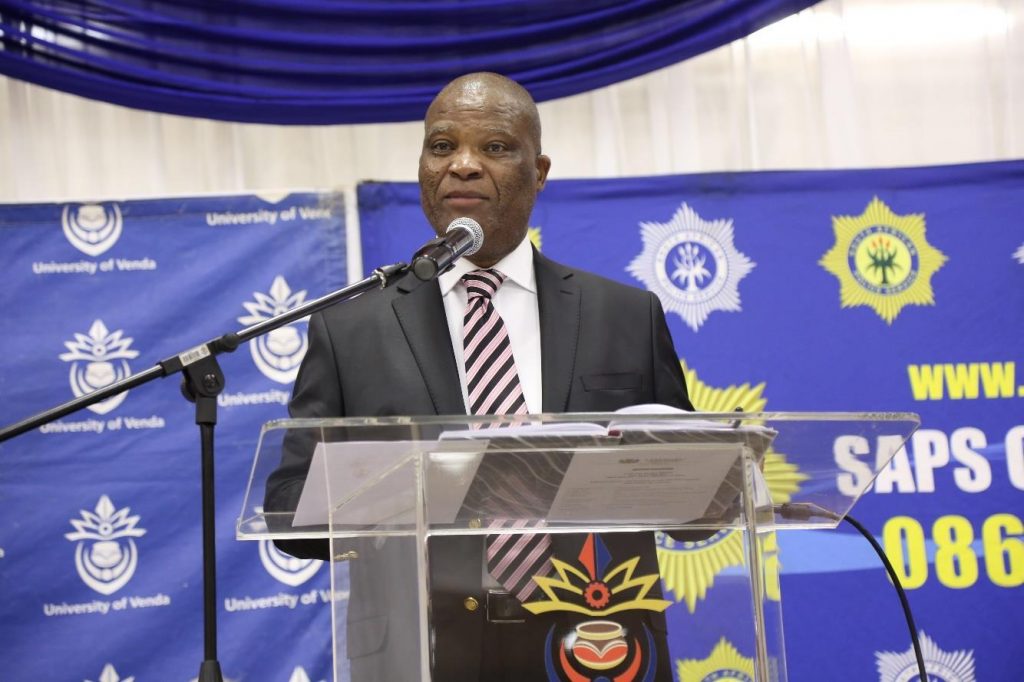 During the Seminar, the MEC for Transport and Community Safety Hon Namane Dickson Masemola explained this seminar as a historic meeting of minds and thoughts from various academic staff, government officials and students. “This meeting is positioned during the right time because we now have 3 months in the office since elections and this meeting will assist us to review our strategy on how to tackle crime in our Province,” he said.

Hon MEC Masemola highlighted that, long before 1994, leaders fought and drafted a legal document on how to combat and reduce crime in this country. He said the Department is in the process of reviewing Limpopo Provincial Crime Prevention Strategy and they need inputs from various stakeholders. “Research findings from study conducted by academics regarding causes of crime and recommendations of how to tackle this challenge will also assist us to reduce crime in this Province.” MEC Masemola also said the experiences of students who are frequently being attacked by criminals also need to be given special attention because they can assist in the crime prevention strategy.

Amongst other things, Masemola said lawlessness takes a country backward. We need to make sure that we educate our people on matters relating to crime and how to combat it. He said social cohesion cannot just happen out of the blue. “We need to have sessions like this in order to build a crime free country not only at institutions of higher learning but also within communities where we come from.”

He said he was happy to see young people gathered in the Auditorium because the future of this country lies with them. MEC Masemola advised community members, traditional leaders, church leaders and all government departments to work with the members of the SAPS in making sure that peace is being restored in the Province. He said crime in Limpopo is decreasing but that should not be celebrated. “We need to make sure that there is no crime at all.” 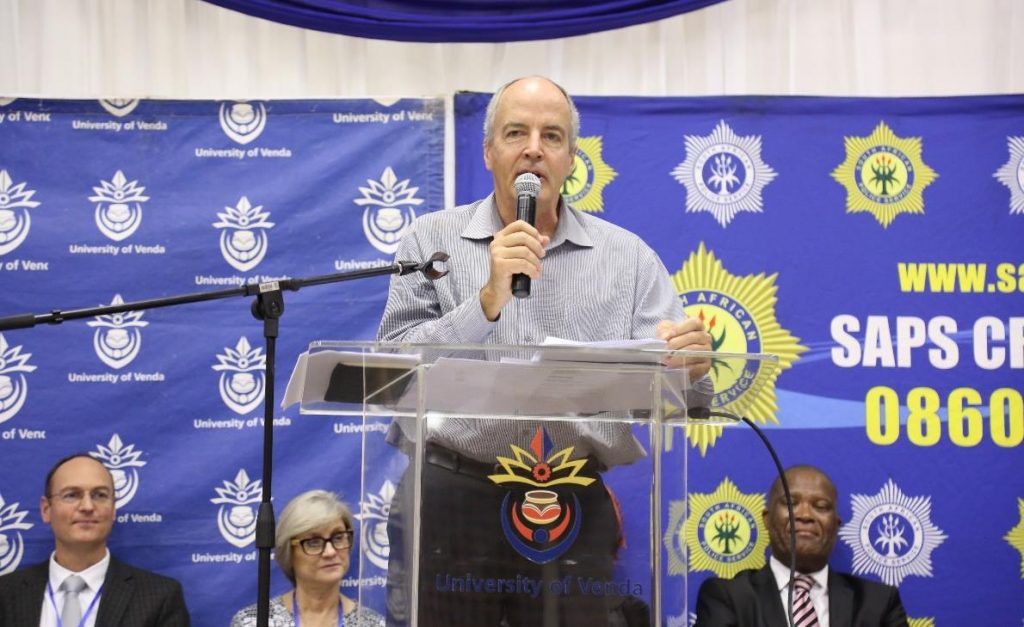 In his welcome address, Deputy Vice-Chancellor, Academic Prof Jan Crafford representing Dr Bernard Nthambeleni, UNIVEN Vice-Chancellor and Principal said the School of Law does us proud because not so long ago, they hosted the Minister of Justice and Correctional Services, Honourable Ronald Lamola to address similar issues relating to the rising number of criminal activities in our country. Prof Crafford thanked the Provincial government for honoring the invitation to the seminar. He said the University is doing its level best to combat crime within the Campus and in the surrounding communities.

Mr Stander who is the Chief Director in the Limpopo Provincial Department of Transport and Community Safety presented on their current Limpopo Provincial Crime Prevention Strategy (LPCPS). He said there is a vision 2030 for safety and Security that outlines that people living in South Africa need to feel safe at home, at work, at school and they must enjoy an active community life free from crime. This crime prevention strategy further explains that, women should walk freely in a well-resourced professional institution staffed with skilled officers who value their work, serve their community, safeguard lives and property without discrimination, protect the peace against violence and respect the rights of all. “The country needs to improve its Criminal Justice System.” Mr Stander further explained that, 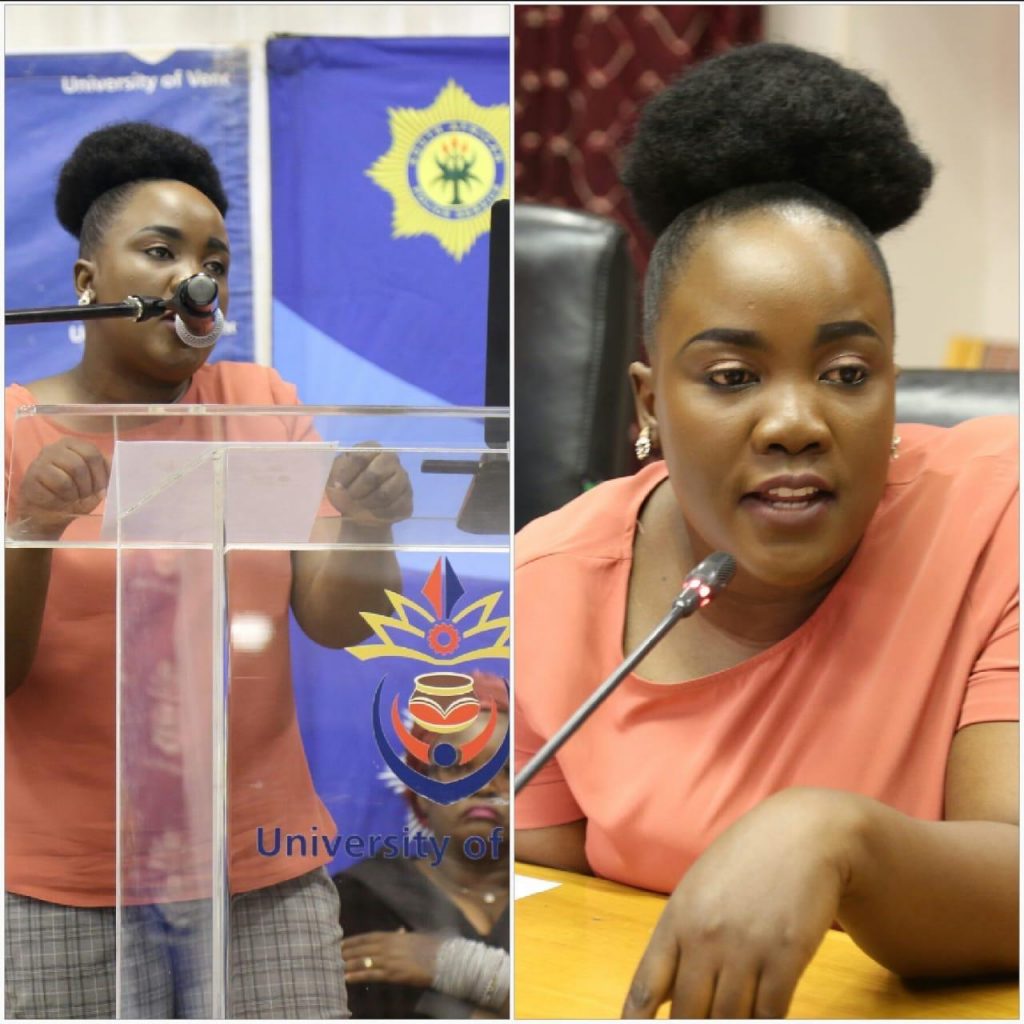 Deputy Dean of the School of Law, Dr Kholofelo Mothibi

Deputy Dean of the School of Law, Dr Kholofelo Mothibi, amongst other things told the audience that there is a need to have rural community safety plan. She said before community members can report crime at SAPS, they need to educate each other on how to prevent or deal with criminal activities within communities. “Traditional leaders and religious leaders need to restore orders within their respective communities.” She further spoke under several themes including social fabric crime; community policing and safety and situational crime prevention. When concluding and making recommendations, Dr Mothibi said the country need to review and check what doesn’t work for us and build on what works for us. 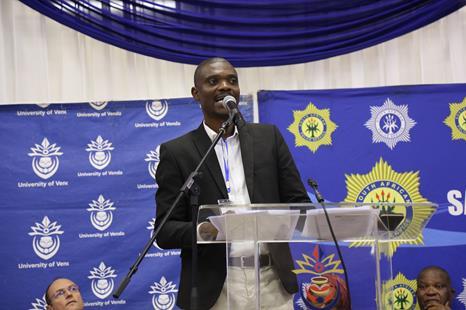 Prof Ademola Jegede, a Professor in the School of Law

When making inputs on Limpopo Provincial Crime Prevention Strategy Review, Prof Ademola Jegede, a Professor in the School of Law, UNIVEN said there is a need to engage in this kind of discussion to make sure that both parties produce a very important document that will ensure that criminal activities in this Province are reduced. 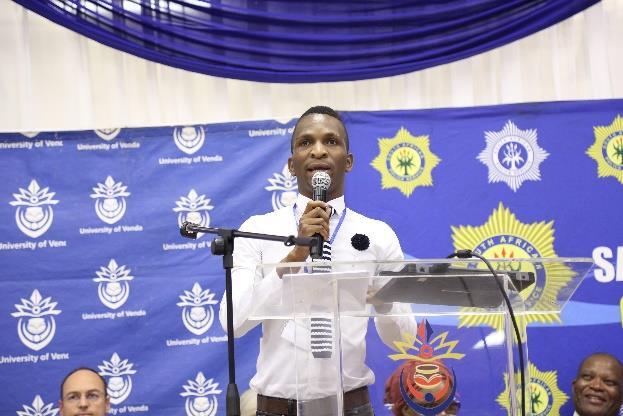 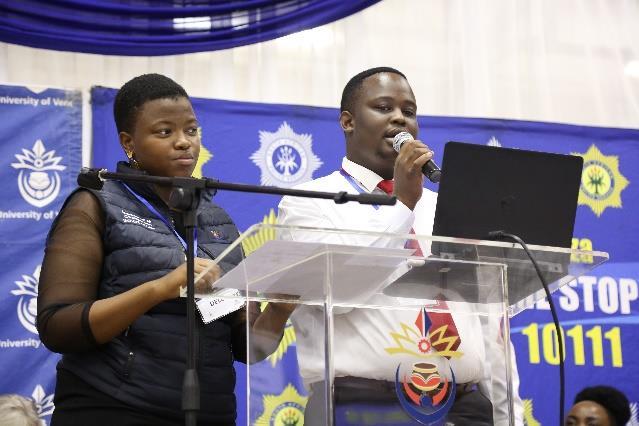 Ndivhuwo Munyai, a UNIVEN Criminology student was given an opportunity to present. He recommended that there should be CCTV cameras at high crime zone areas and should be monitored on daily basis. He spoke about the issue of job creation because unemployed graduates will contribute to the increase of crime rate. He recommended that there should be centres for children without parents because most of them are out on the streets and are hungry hence they even commit crimes.

LLB Students Muano Nemavhidi and Collins Munyai said the government also need to send people to our communities to educate people regarding crime. They also spoke about the illegal sale of alcohol. “South African youth should stand up and do something about crime happening around them. They should not wait for a crime to happen before they can act. We need to be proactive. People who are selling alcohol to children and those selling illegally should be reported by community members to the police.” 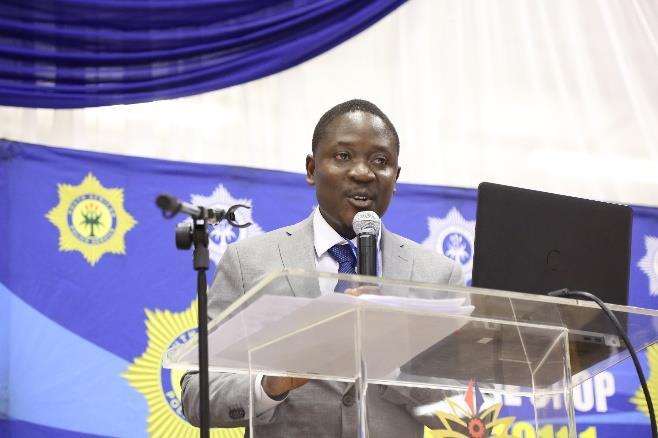 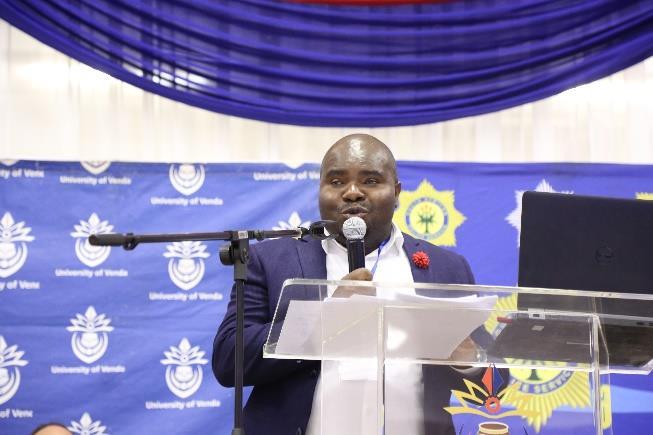 Mr Happy Tirivhangasi graduate from Antwerp University in Belgium said a proper government should have a structure or a plan on how to prevent crime. “There should be a security measure in place in order to keep peace and order in that country. Tackling crime before it can happen is very important.” He said it is dangerous for a country to have undocumented immigrants. “Landlords should also make sure that their foreign tenants are well documented. Employers must be accountable and take responsibility of checking work permits of immigrants before hiring them.”

Advocate Mafanywa Mangammbi said there is a need to start from the beginning. “Crime should be the first subject to be taught at primary level. Government, communities, church and traditional leaders should start educating people about crime. There is no money that will be enough to combat crime, the only way to combat crime is go back to communities and educate them about crime. Even an increase of police men and women cannot combat crime, not even death penalty can combat crime. 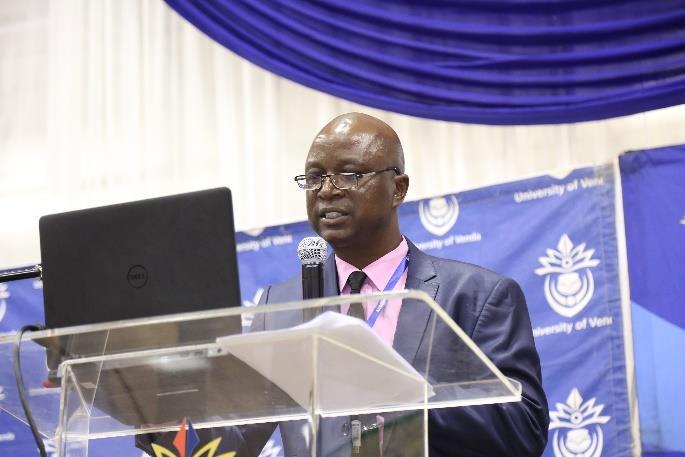 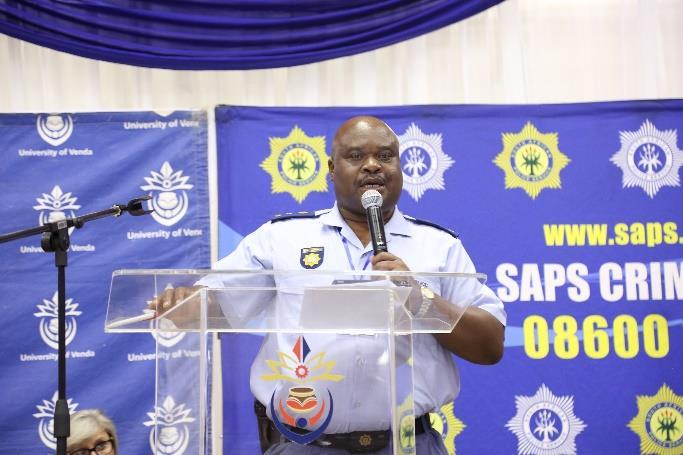 Dr Colonel Christopher Mabasa who is a PhD candidate from Tshwane University of Technology spoke about four pillars of crime prevention. He said community members need to be taught how to combat crime. “There should be an improvement in our border controls.”

Brigadier Shiyani Wilson Mashava, Station Commander at Thohoyandou SAPS said all stakeholders are relevant and important. All speakers spoke about finding a system in place to prevent crime and asked students to assist in drafting that system. “We really need to implement our strategies. SAPS is left alone in the battlefield and every problem is left for the police to deal with. Everything is being channeled to the police, let all government departments, community members, church leader and traditional leaders work together in combating crime.”

Vote of thanks was rendered by Advocate Gideon Joubert, from the office of the Dean of the School of Law. He thanked the organizers of the event, speakers, students and visitors from the Department of Community Safety and various government departments for honoring the invitation and Members of SAPS including the band. He also thanked MEC for making time to meet and speak with students of UNIVEN. 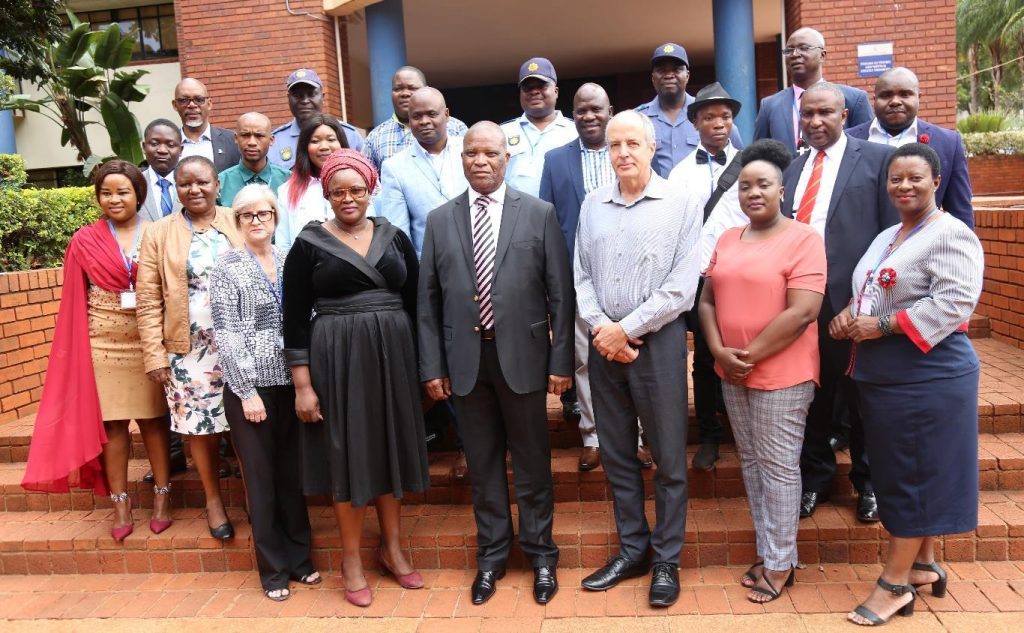