Univen, BANKSETA and SAICA acknowledge the hardwork of Thuthuka beneficiaries 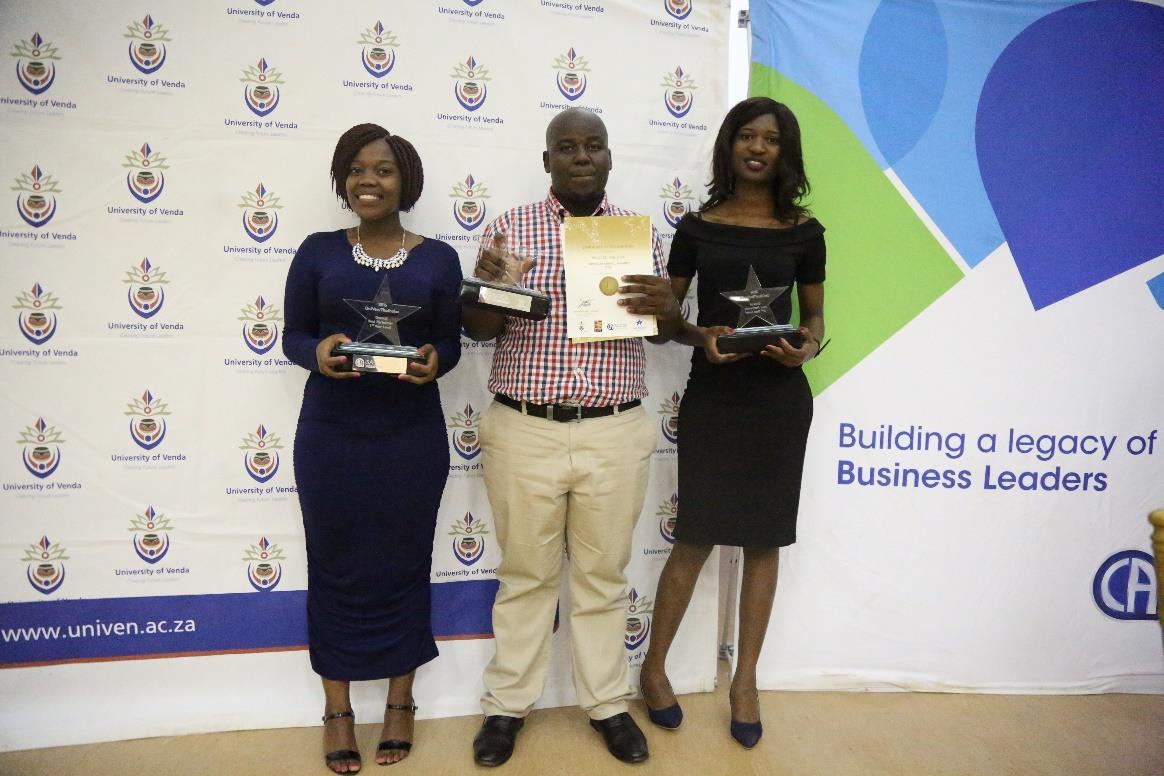 “This is the third prize-giving ceremony, since the inception of the Thuthuka programme in 2014. The aim of this ceremony is to stimulate academic excellence by acknowledging and rewarding deserving students for their outstanding performance,” said Ms Mutondi Mashamba, Financial Accounting Lecturer, speaking on the behalf of the Department of Accountancy’s Head (HOD), Prof Emmanuel Oseifuah during the Thuthuka Univen Prize giving Ceremony that was held at the Auditorium on Monday, 29 May 2017.

She said this prestigious event is sponsored by the South African Institute of Chartered Accountants (SAICA). She further congratulated all prize winners as well as students who performed to the best of their ability in 2016. “I would like today’s celebration of achievement to also serve as an opportunity for inspiration, especially to those students who may have resigned themselves to a ‘prize-less’ level of performance,” she said.

Ms Mashamba further told the audience that Univen is building a generation of young leaders “it would be a mistake to see events like this as a celebration only of the top achievers and awards recipients,” she added. She continued by saying that today is about deserving students taking an insightful stock of their results of labour, attitude and motivation, most importantly for all students to affirm and seek inspiration for future awards.
“On behalf of the Department of Accountancy, I wish to congratulate all our dedicated, hardworking students for their achievements. It is my conviction and hope that this prize giving ceremony will encourage you to further scale up your works that you have been doing,” said Ms Mashamba. She concluded by encouraging students who couldn’t make it to the award list not to get discouraged. “Rather, it should motivate you to also scale up your performance in order to get recognition next time,” she concluded.

Transformation of the profession and taking on our nation building responsibility was a no-brainer -Ms Gugu Makhanya.

Ms Gugu Makhanya, Transformation and Growth Senior Executive at SAICA said, “SAICA identified the need to holistically support students in order to grow the pipeline of the profession.” She further expressed that SAICA initiated the capacity building programmes which are targeted at historically disadvantaged institutions across the country. Ms Makhanya added by saying that the capacity building programmes are aimed to assist the historically disadvantaged institutions to obtain SAICA accreditation and ensure a sustainable channel which will supply students with scarce skills programmes and Univen is one of the identified Universities.

“Given the history of our country, from which SAICA is not immune, capacity building is still a key imperative focus area for SAICA”. She said Transformation of the profession and taking on our nation building responsibility was a no-brainer but a responsibility well embraced. “This was made possible by key strategic partners because programmes of this nature requires a lot of resources like the University of Johannesburg experts.” She said UJ helped Universities such as the University of Limpopo and the University of Fort Hare and they hope that Univen will follow next year (in 2018). She also thanked BANKSETA for financial resources and encouraged them to continue to fund their project and the students until they become Chattered Accountants. She concluded by congratulating awards recipients and told them to always strive for excellence and not mediocre.

Celebrating students for dedicating themselves towards their studies is of great importance -Mr Tshilidzi Mudzuli.

Mr Tshilidzi Mudzuli, a third level student who is also a Thuthuka beneficiary, has on behalf of Univen’s Thuthuka beneficiaries thanked Thuthuka and the sponsors which include BANKSETA and SAICA. “We were helpless but Thuthuka become a relief. Many of us have grown through Thuthuka and if we were trees we would be reaching the moon by now,” he said. He also stressed that, “celebrating students for dedicating themselves towards their studies is of great importance as it encourages them to do better.” He concluded by extending his gratitude to the Accounting Lecturers who are patient enough to help them reach their full potential.

Simile Dhlamini has encouraged students to start their own accounting firms and employ the generation that is still coming.

Work Integrated Learning (WIL) Manager, Simile Dhlamini, thanked the students for working hard and making Bank Seta proud. He advised students to look beyond their salaries and also look at ways of creating employment for other people by starting their own businesses. Chartered accountants are in demand so accounting students should venture into becoming CAs said the WIL Manager.

The SRC President, Mr Mandla Shikwambana was thankful to all sponsors and funders. He told them (funders and sponsors) to also encourage other organisations to sponsor the needy students at Univen because they are also sponsoring students at other institutions, “Univen is in need of funds and the number of the needy yet deserving is increasing every year.”
52 students funded by Thuthuka received certificates of appreciation for their hardwork and among them was Phindile Ngubane, Phuluso Muligwe, Livhuwani Neswiswa and Migingiriko Nkuna who were the best performers in level one to level three. Phindile Ngubane and Phuluso Muligwe were the overall best performers in the first year level, Livhuwani Neswiswa was the overall best performer in the second year level and in absentia was Migingiriko Nkuna as the average best performer in the third year level.

Representatives from the School of Accountancy, SAICA, BANKSETA, SRC, WIL and Award winners posing for a photo during the prize giving award ceremony.

SAICA Project Director Matsotso Tsoaledi giving his vote of thanks and appreciating the hardwork of all beneficiaries and stakeholders.