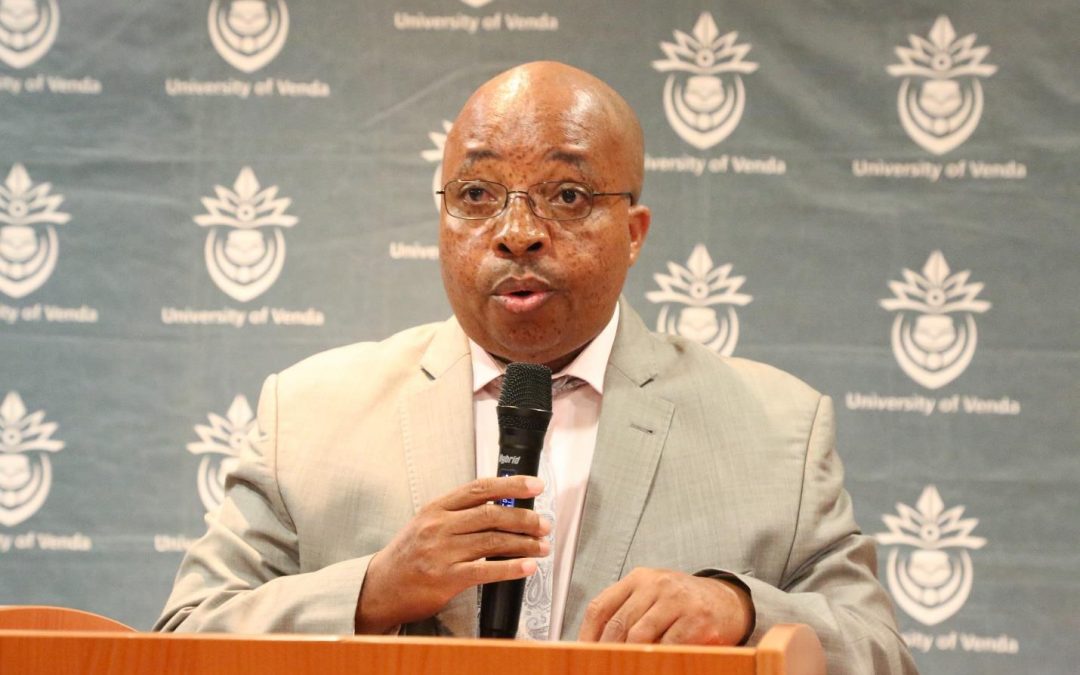 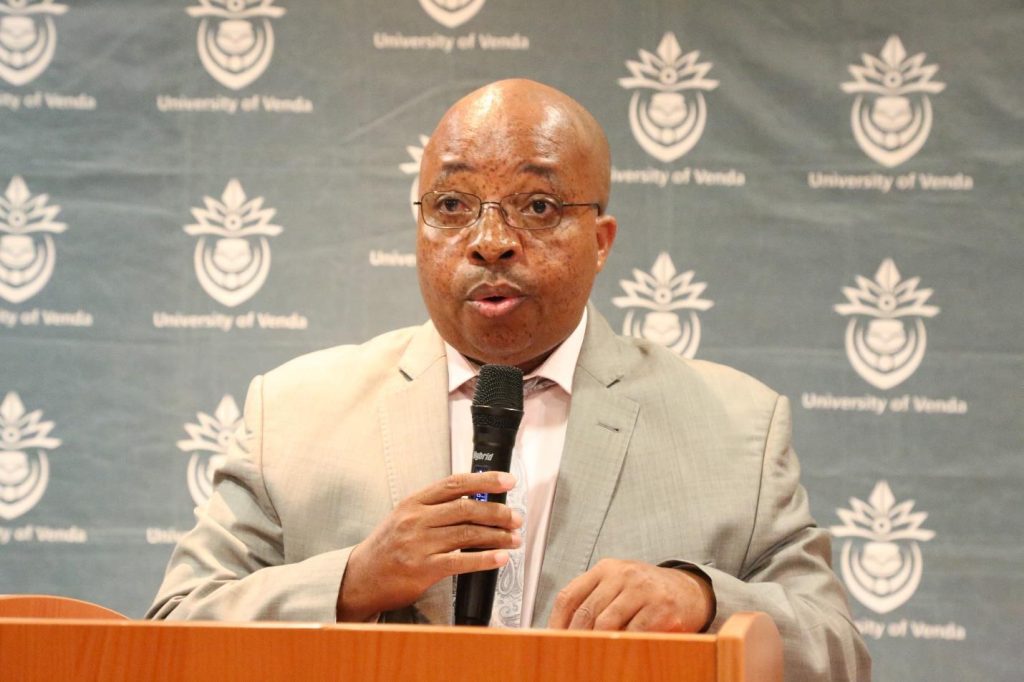 The University Registrar, Prof Edward Nesamvuni, in his response message said Student Centered services is a function of the whole University in its horizontal and vertical structures. He said the Registrar Academic Committee (RAC) was an assembly of all directors in the quest to deal with policy, procedures and snag list of administration, management and operational matters to deliver functional services. Prof Nesamvuni thanked all directors, past and present in their portfolios for their cooperation and dedication to their work. “you have made my task to report to SENEX very easy.”

He continued to say that he has worked hard with the SRC and colleagues from all spheres of the University but had to learn to deal with pain to grow and develop students in their unique demands and needs. Prof Nesamvuni explained that it was during this period that he worked with six different SRC Presidents, their cabinets and broad parliament. “I would like to thank the SRC as a body, present and the past for their contribution and cooperation at times under very difficult circumstances.” He said it was a reward for him and the Division at large when they experienced the joy of seeing SRC graduates increasing in number over the years not only to graduate but also to articulate towards postgraduate studies. He thanked his wife and family members for their support, Council members, Chairs of Council Committees, Vice-Chancellor and Principal, Members of Executive Management Committee, DVCs and Senior Management of the University for working well with him since he joined the University. 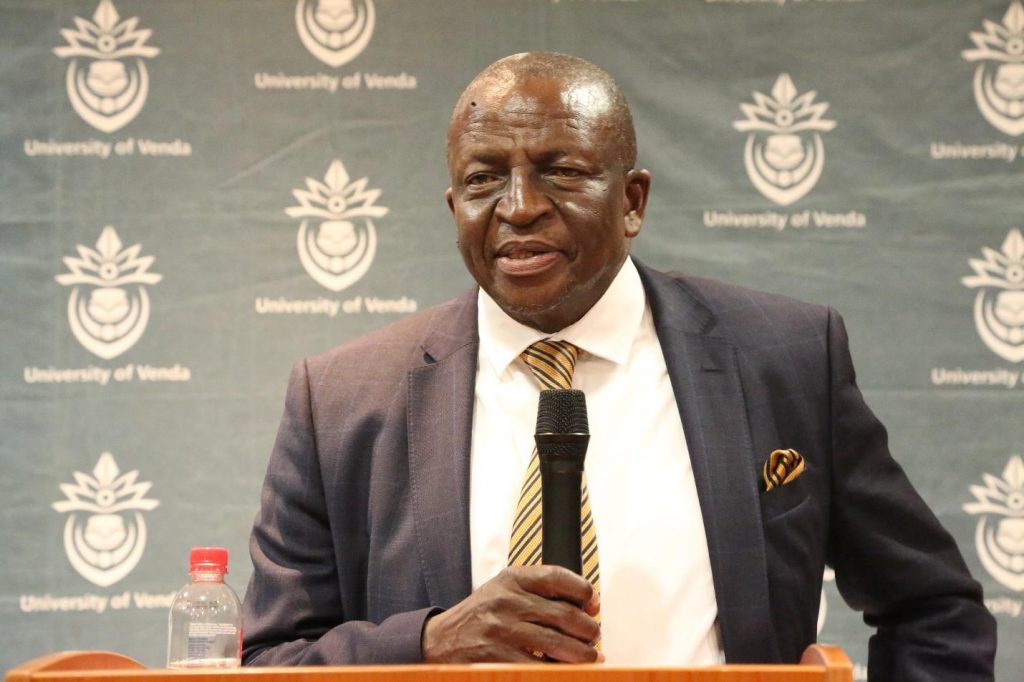 Chairperson of Council, Mr Serobi Maja said this University is very proud to have had a competent Council. He thanked the Vice-Chancellor and Executive team for their hard work and for steering the University towards the right direction. Mr Maja told Prof Nesamvuni that his character and manner in which he does things are exceptional. “We will miss your abilities and the manner in which you handle situations.” He said UNIVEN has in the past years excelled in terms of stability. “This Council has been very stable, and they supported each other on many instances.” Mr Maja concluded his talk by mentioning that UNIVEN will continue to be among the best universities in the country and internationally. “I hope and trust that we will keep producing responsible future leaders.” 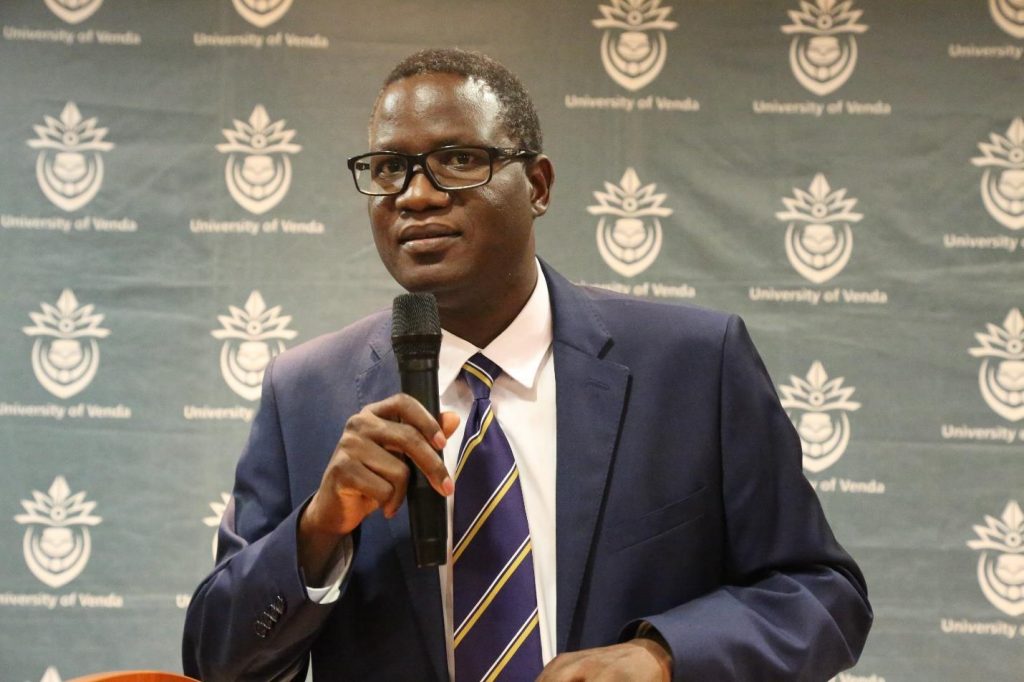 Vice-Chancellor and Principal, Dr Bernard Nthambeleni said, it has been a pleasure for him to work with Prof Nesamvuni for many years even while he was serving as a member of Council. Dr Nthambeleni thanked Prof Nesamvuni for the role that he has played as a senior leader at UNIVEN and for the contribution he has made at the University. “We enjoyed very good moments together at UNIVEN. UNIVEN has achieved many goals under him.” He expressed that the achievements that he has brought since he joined the University are countless. He said Prof Nesamvuni has really contributed a lot to the University. “The team is what it is today because of your leadership. “I have enjoyed working with you.” Dr Nthambeleni wished Prof Nesamvuni well as he was taking another step in his life. “We will surely miss you and your collegiality. Wherever you go, you will have to contribute towards the development of this country.” 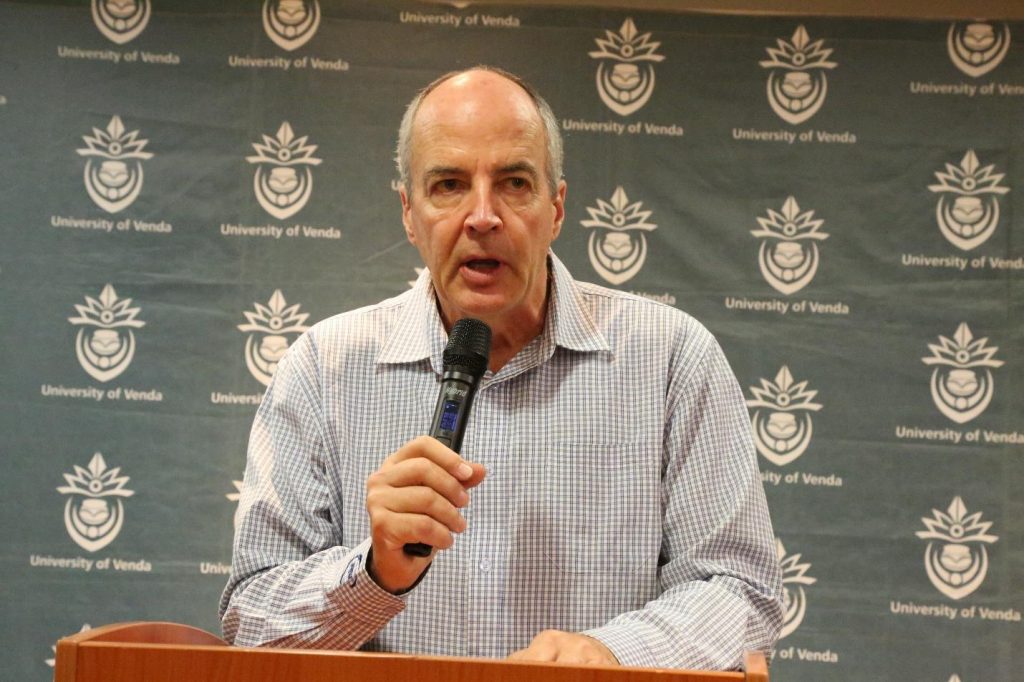 The Deputy Vice-Chancellor Academic, Prof Jan Crafford said, it feels like only yesterday when Prof Nesamvuni joined UNIVEN. “Over the past 30 years I have always known Prof Nesamvuni in academia and in government departments and he has always been a very good hearted, calm and understanding person.” Prof Jan Crafford wished Prof Nesamvuni well in his future endeavors and said this should not be the end of communication with his colleagues at UNIVEN. 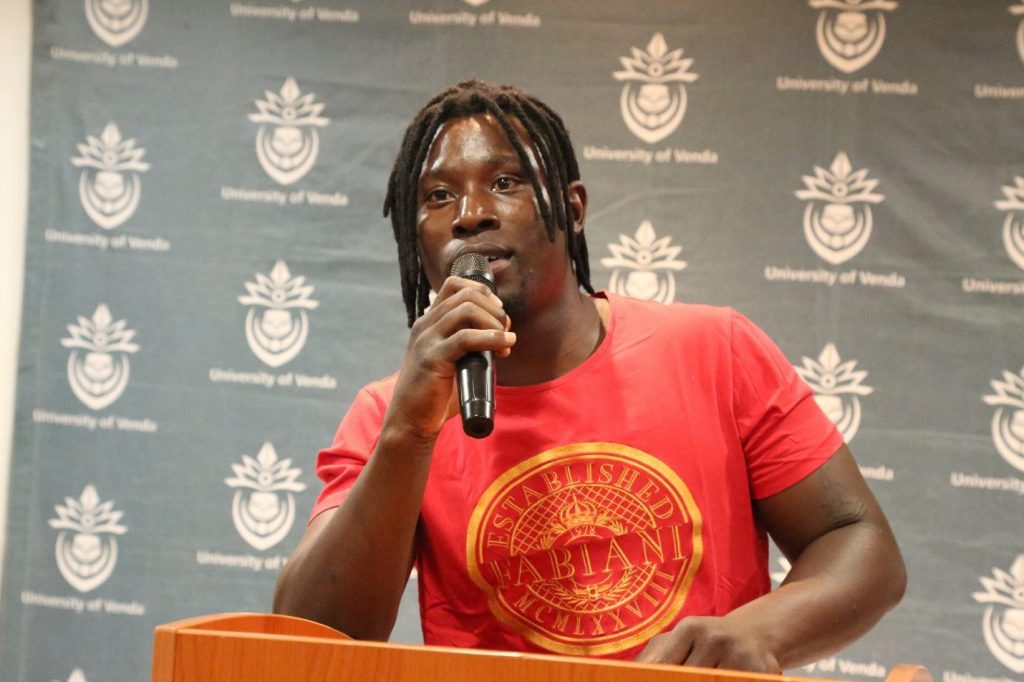 SRC President, Mr Tsundzuka Hakamela said this is a difficult time because we are bidding farewell to one of our own, our father as UNIVEN students. Under his leadership, we have opened several infrastructure including recent male and female student residences and Student Centre Building. Mr Hakamela said when they had challenges, Prof Nesamvuni would never take them for granted but would listen to them and advise what to do to overcome such challenges or even assist us on many occasions.
“This should not be the end of the journey, you still have the responsibility of developing the country with the experience, knowledge and skills that you have. Mr Hakamela told Prof Nesamvuni to go out there and shine because when he shines there, the whole University shines. “The University will remember you with the efforts you have put in everything you were doing.” 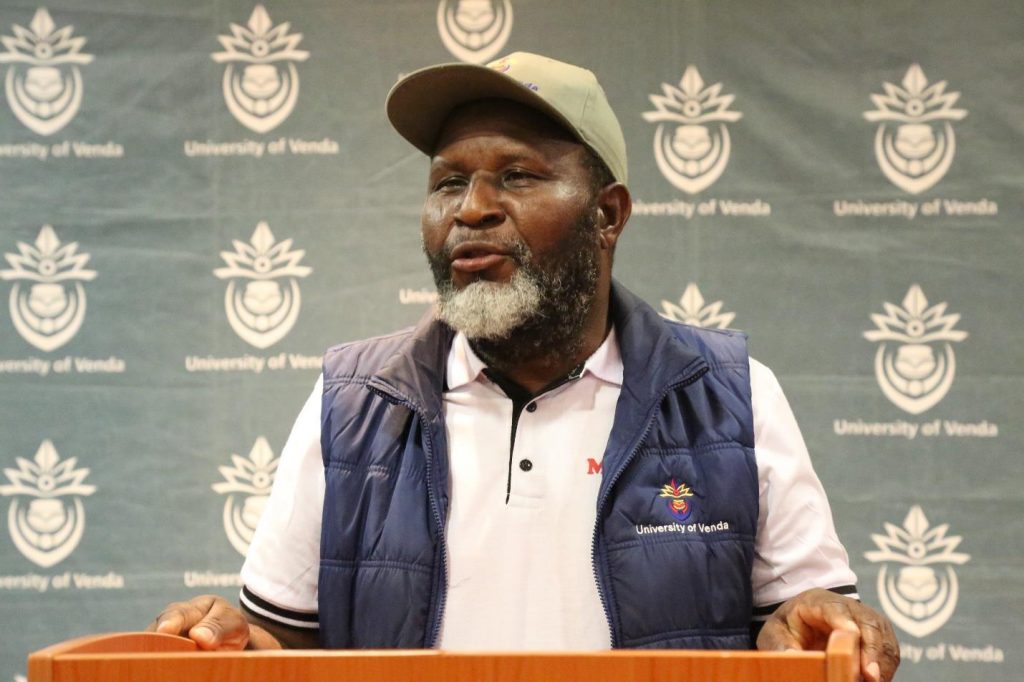 When representing the University staff, Mr Alfred Mutoti said, it is very painful to speak during the farewell function of Prof Nesamvuni. “When I heard that Prof Nesamvuni is leaving the University, it sounded like a joke or I was dreaming, but indeed, it is true that he is leaving.” Mr Mutoti continued to express that when he first met Prof Nesamvuni, he saw that this is a man who will bring a lot of contributions and positive changes to UNIVEN. “It is very painful that he is leaving UNIVEN, but I think we should have asked him to withdraw his decision to resign and continue working for the University.” 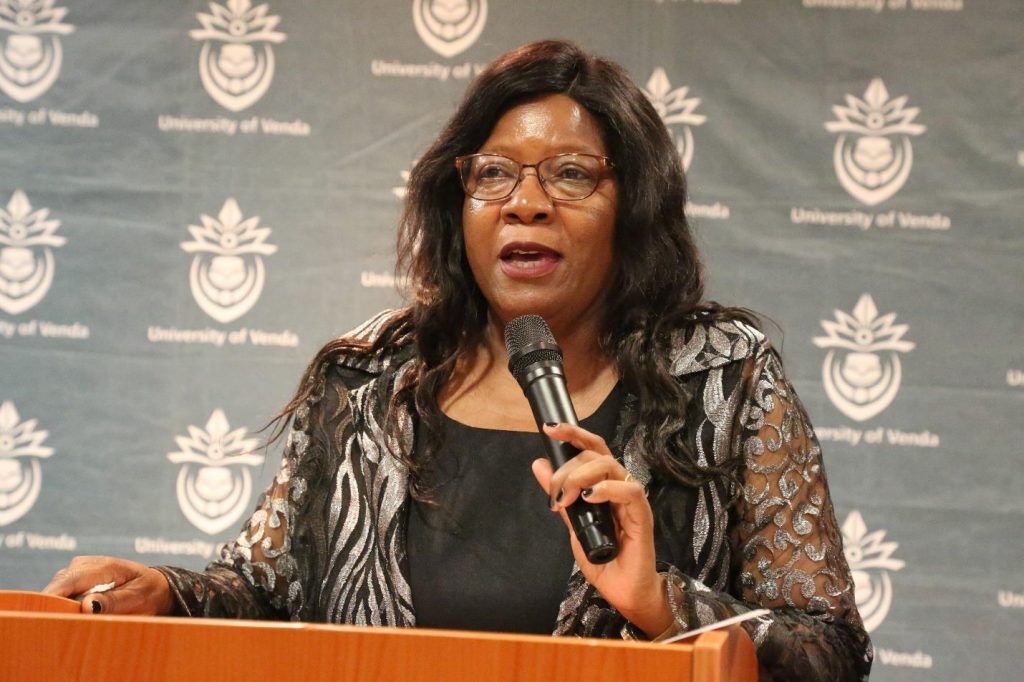 The Director of Centre for Higher Education, Teaching and Learning, Prof Nancy Mutshaeni

The Director of Centre for Higher Education, Teaching and Learning, Prof Nancy Mutshaeni, speaking on behalf of Senior Management, said she has worked closely with Prof Nesamvuni at Senior Management Committee. She also said that during Prof Nesamvuni’s tenure, the Registrar Academic Committee (RAC) was established and it continues to do very well. She continued to describe Prof Nesamvuni as a person who has been the champion of Business Process Re-Engineering which cuts across the University. “Under his leadership, UNIVEN introduced online application and registration system. It is time to also celebrate his contributions to the University, especially the work he has put in towards the governing structure at the University and student-centeredness.” Prof Mutshaeni continued to tell the audience that Prof Nesamvuni’s leadership skills and spirituality are the two outstanding qualities which makes him Unique. “he has admirable leadership qualities.”

“We all know that he participated in many decision-making committees of the University and helped the University administration to come up with correct solutions during many predicament situations. You will always hold special place in our hearts.” She said they will miss his invaluable contribution at all levels, particularly at Senior Management meetings. “our wish is that the years ahead will bless you with good health, bring you joy and happiness.” 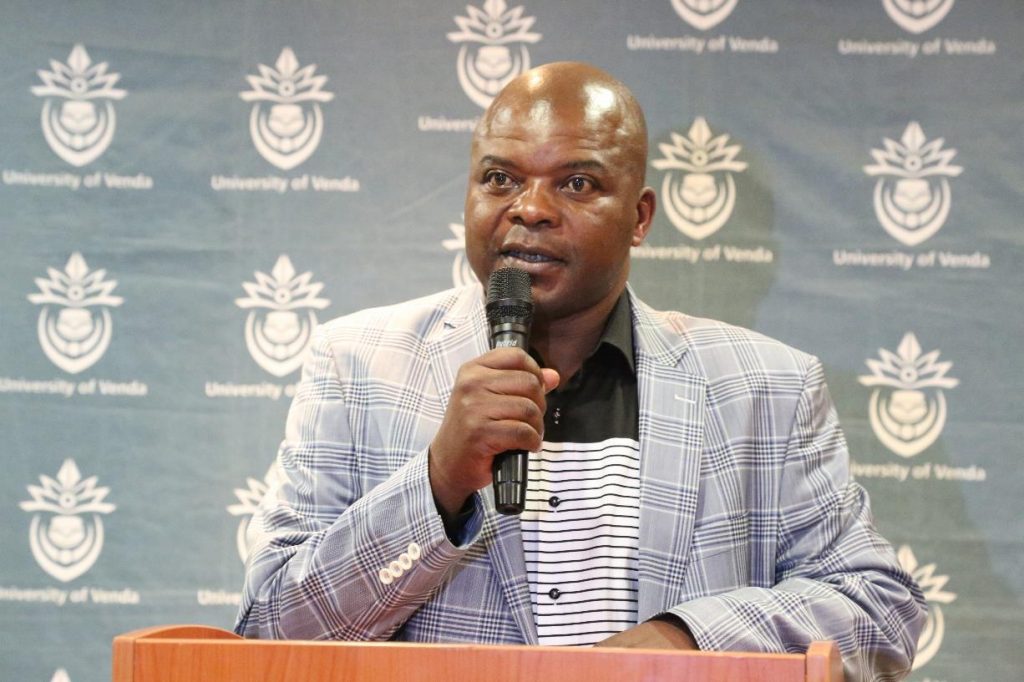 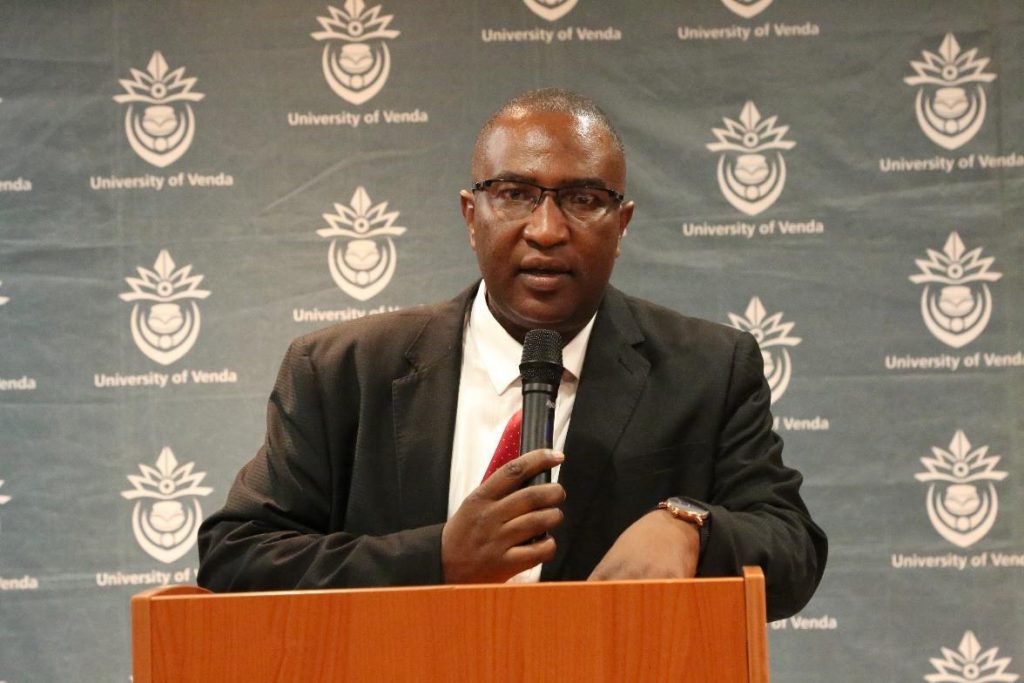 The Director of Communications and Marketing, Dr Takalani Dzaga directing the programme.