It is with profound sadness that the University of Venda mourns the passing on of one of its distinguished alumni, Dr Philip ‘Malombo’ Tabane who died on Friday, 18 May 2018, the last day of UNIVEN Autumn graduation ceremonies. Dr Philip Tabane received an honorary degree, Doctor of Philosophy in Music and Cultural Anthropology from the University of Venda in 1999. The degree was conferred by the then Chancellor and current State President of the Republic of South Africa, Dr Cyril Ramaphosa. 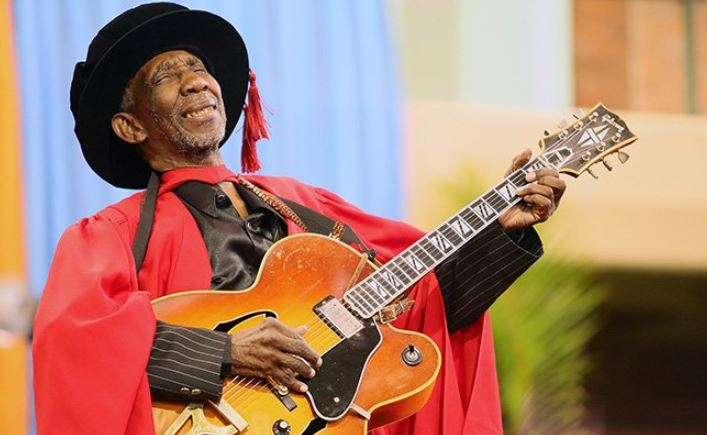 The conferment of honorary doctorate to Dr Tabane was based on his outstanding leadership and innovation in music as well as monumental contribution to the welfare and cultural well-being of the people of South Africa, here and abroad.

Dr Tabane was a Pioneer of Malombo jazz music. He has exported malombo to the world to an extent that even the likes of Miles Davis, Duke Ellington were envious of his originality and eagerly wanted to work and collaborate with him. As expected of a person of strong cultural and philosophical standpoint of Dr Tabane’s calibre, he politely refused to work in anybody’s terms, and insisted that to work with him, American Jazz musicians needed to first understand the manifestation of ancestral spirit “malombo”.

Acting Vice-Chancellor and Principal, Professor Jan Crafford, says, “At Univen, we will cherish the memory of Dr Tabane. Our heartfelt condolences go to his family, friends, the music fraternity and all the people of South Africa who enjoyed his music to the end. He inspired many musicians including our own Prof Geoff Mapaya. As the institution, we would like to pay tribute to Dr Tabane. He was an exceptional man and musician, and there are lessons to be drawn from his full life. May he rest in peace.”