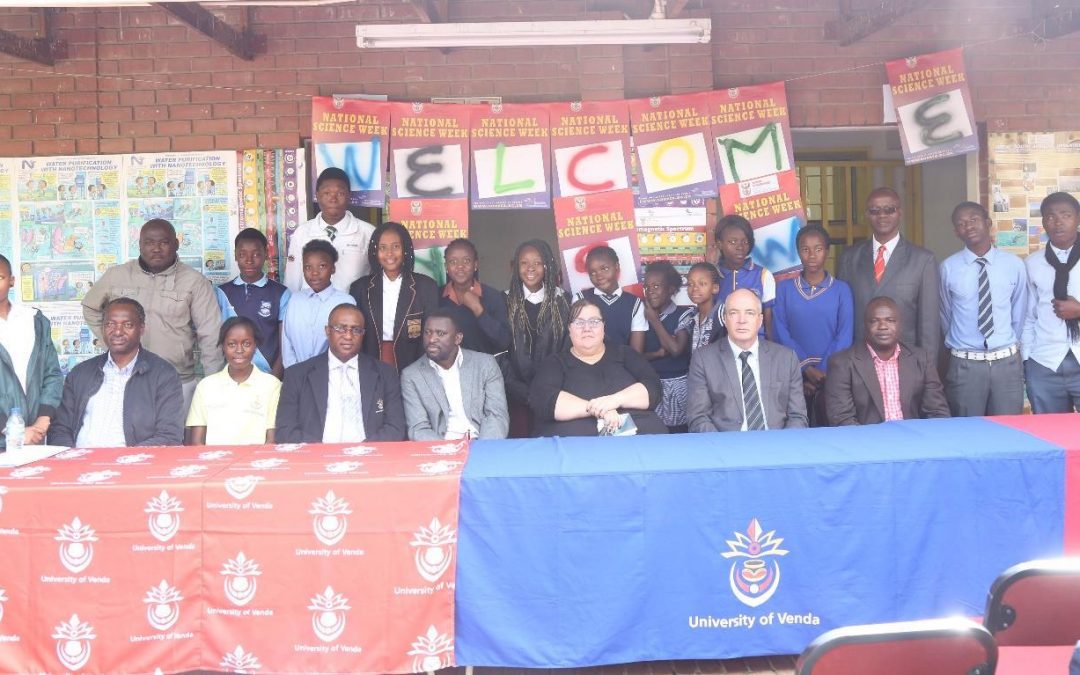 “The future of South Africa and African continent is dependent on the next generation. Therefore, it is our duty to develop the next generation of talented scientists and entrepreneurs who can take up the opportunity to create new technologies and innovative solutions for the pressing problems facing our communities today,” said Prof Natasha Potgieter, Dean of the School of Mathematical and Natural Sciences during the official opening of 2017 National Science Week. The event was held on Monday, 07 August 2017 at Vuwani Science Resource Centre.

Prof. Potgieter added that the Vuwani Science Resource Centre is making a huge contribution in the country. She said the Centre is actively involved in projects that create awareness of the value of Science and Technology and the role it plays in ensuring sustainable community development engagements.

National Science Week (NSW) is an initiative of the Department of Science and Technology (DST). This is to celebrate various role players conducting science-based activities during the week. National Science Week is run in all nine provinces simultaneously at multiple sites per province.

Prof. Jan Crafford, Deputy Vice Chancellor Academic, told the learners who were present during the official opening that the Vuwani Science Resource Centre exist for them. He said the learners are the hopes of this country’s future.

“One of the biggest challenge in our country is to increase the number of female scientists,” he said. Prof Crafford has advised female learners to go for Science and Mathematics in order to make sure that this innovation becomes possible. He added that the National Science Week has, in the past years celebrated during the Women’s month and it might be a sign that we need to link it with women of this country. Prof. Crafford thanked students from the University of Warwick for their assistance regarding the project of improving Maths and the teaching of English at local secondary schools. Prof Crafford highlighted that the project through Warwick University is yielding good results. He further mentioned that the Centre is there to improve pass rate for science, Maths and English. “We want you to come to Univen with a sound background of Science, Maths, Technology and
English”, added Prof Crafford. He concluded by encouraging learners to take much information home with them and make use of the opportunity given.

Dr. Eric Maluta, HoD: Physics in the School of Mathematical and Natural Sciences told learners that when they travel around, they must be able to identify science because almost everything is science. “Even our forefathers were scientists because of the way they used to start a fire before inventions of match sticks,” he said. Dr. Maluta further advised learners to never undermine traditional leaders and healers because they know more than we do and they might help them in future.

Mr Takalani Dzaga, Director of Communications and Marketing, during his welcome message told learners to apply for 2018 enrolment at Univen and become one of the best products that Univen has produced so far. Mr Dzaga told the learners that the closing date for 2018 applications for admission and hostel accommodation at Univen is 29 September 2017. He added that applying at Univen has been made even simpler because, learners can now use their cellphones to apply and submit their applications online.

In his vote of thanks, HoD and Deputy Dean of the School of Mathematical and Natural Sciences, Dr. Simiso Moyo said, “this is an annual celebration of national and international achievements in science and mathematics through innovative engineering and technological milestones that have enhanced economic development of the country.” He added that this year’s National Science Week is being held from 5 to 12 August under the theme: ‘advancing Science tourism,’ in recognition of the United Nation’s International year of sustainable tourism for development. “South African heroes of science come from various disciplines and our country has also produced inventors whose products are consumed worldwide,” He concluded.

Jason Chang representing students from Warwick University, said that he is not a scientist but he is very privileged to help learners to realise their dreams.

Learners from various secondary schools around Vuwani and Thohoyandou listening to speakers during the 2017 National Science Week official opening.

Robert Tshikwama, Indigenous Knowledge System Documentations coordinator, representing communities said that Science is not only about Machinery, even our indigenous way of doing things can be regarded as Science.

Univen officials with learners representing their schools from communities around Vuwani and Thohoyandou.