UNIVEN researchers urged to be inclusive and innovative

The University of Venda (UNIVEN) Directorate of Research and Innovation under the leadership of Senior Prof Georges Ekosse, hosted Research Week at 2Ten Sibasa, outside Thohoyandou from 02 – 03 October 2019. The first two days were dedicated on Research Indaba (Research Leadership and Technology Transfer Stakeholders forum) Workshop. Day three which was an Open day, continued on campus on 04 October 2019. The 2019 Research week was hosted under the theme ‘Promoting Research and Innovation to its pole position at UNIVEN’. 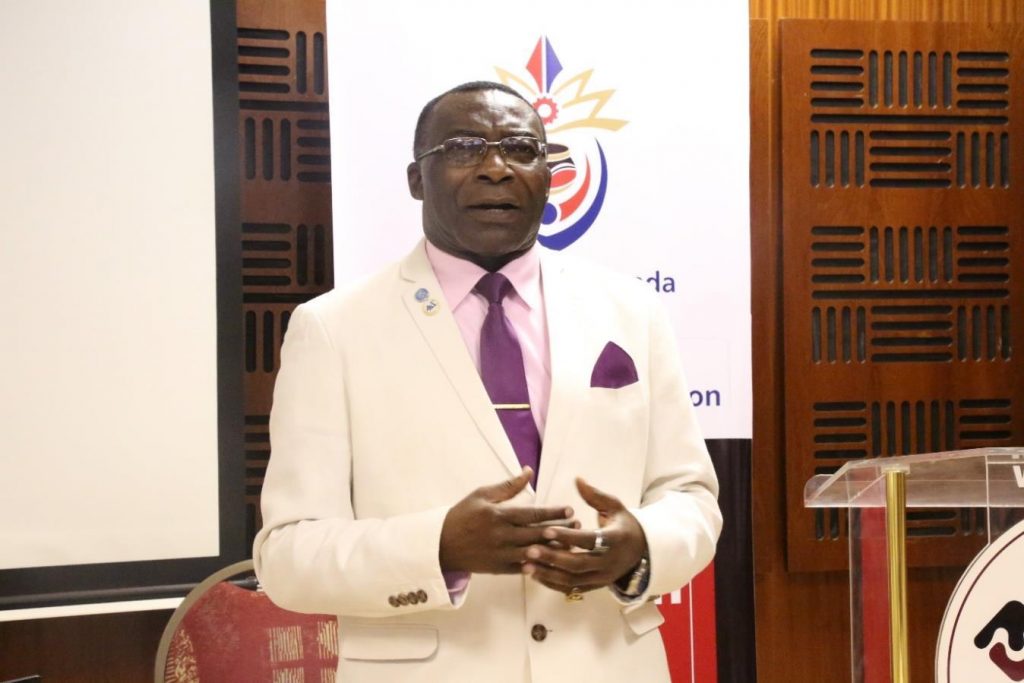 The Director of Research and Innovation Senior Prof Georges-Ivo Ekosse

The Director of Research and Innovation, Senior Prof Georges-Ivo Ekosse in his welcome remarks appreciated the dedication and commitment of the invited guests and their availability when they are needed. He also extended his gratitude and the impression on the state of research at UNIVEN. “I am pleased to say that the University of Venda 2019 graduation ceremonies has conferred a total of 64 Doctoral degrees. It is a great achievement that we have accomplished so far,” Ekosse.

While rendering the Research Thrusts, Networking, collaborations, Technology Transfer, Disseminations and financials at UNIVEN, Senior Prof Ekosse guided UNIVEN researchers to write proposals not only for grants, but for their proposals should have impact to the community and play a major role to be recognised worldwide.

He encouraged academics with masters qualification to do PhD. Prof Ekosse said “We expect every academic at UNIVEN to publish including postgraduate students to publish before they graduate. Having a qualification without publishing is not enough”. He made mentioned that UNIVEN currently has 38 NRF rated researchers. “More than 50% of publications come from those rated researchers”, added Prof Ekosse.

“It is not pleasing that only few African men and women participate in Science and Technology. We need to recruit more of our fellow Africans to join us in science and technology because education is a way in which we as the country can help our country’s economy to grow through science and modern ways,” said Deputy Director General, Technology Innovation, Department of Science and Technology, Mr Mmboneni Muofhe. He encouraged young researchers that their research should focus more on social issues that are happening for them to solve problems through science and technology.

When addressing research value for societal benefits, he outlined that researchers should take advantage of the challenges that the country is facing in order to embark on a project that will impact and benefit not only the affected society but also the country. 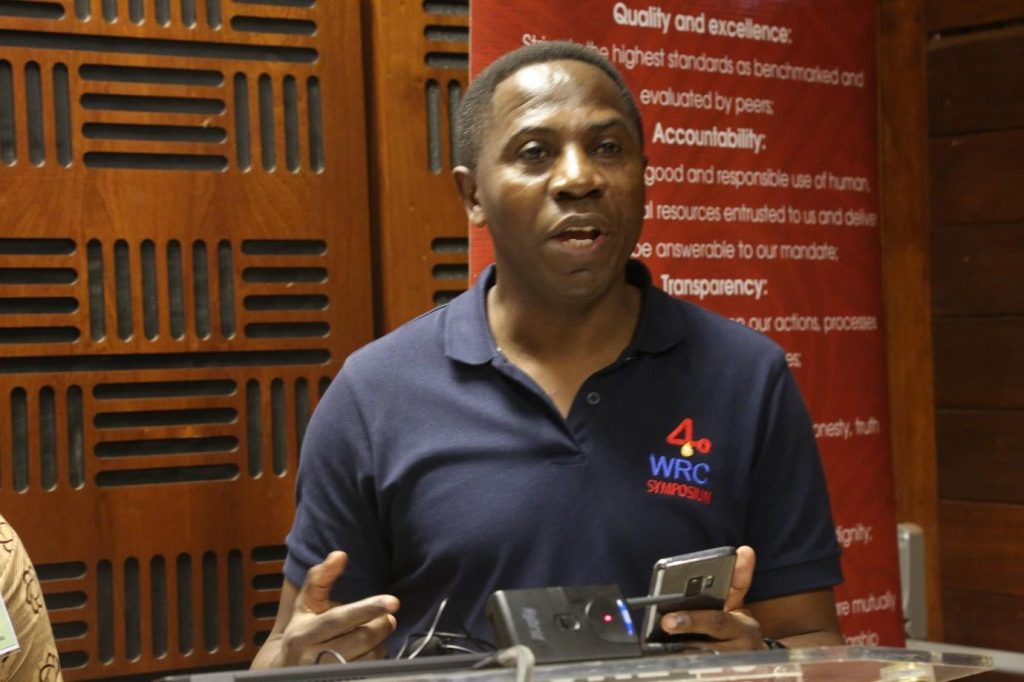 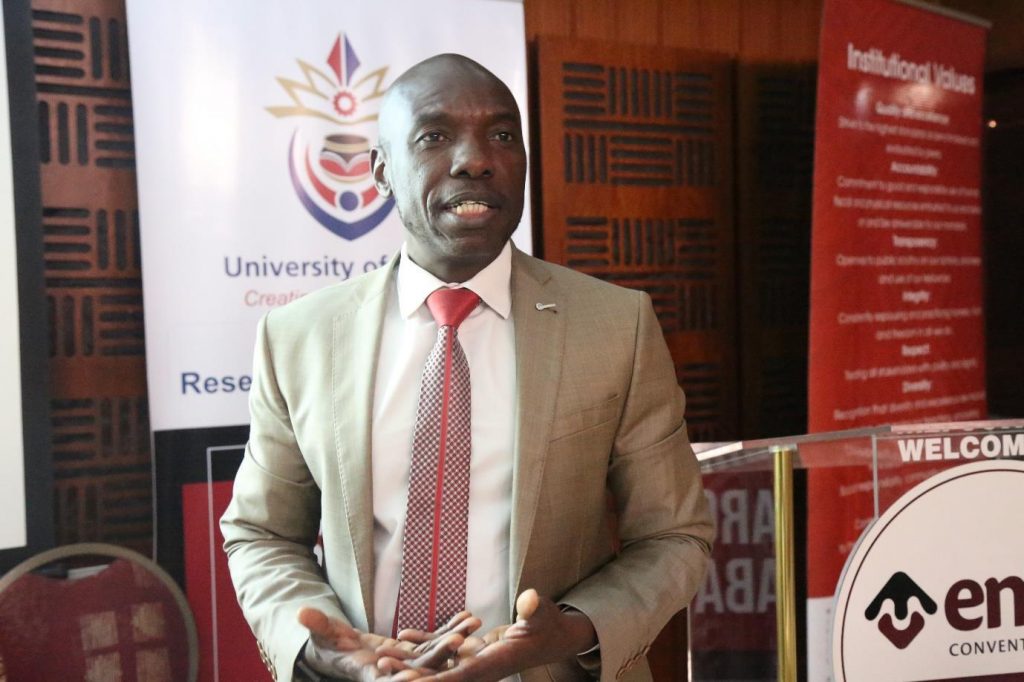 Dr Stanley Liphadzi, Group Executive, Water Research Commission responded on the state of research at UNIVEN that he is enthralled on the number of doctoral degrees that the University produces each year. “It should be a habit for researchers to publish their journals so that they can have an impact to the now world”. He mentioned that when he was addressing the audience on the impact of research and innovation in the now world. 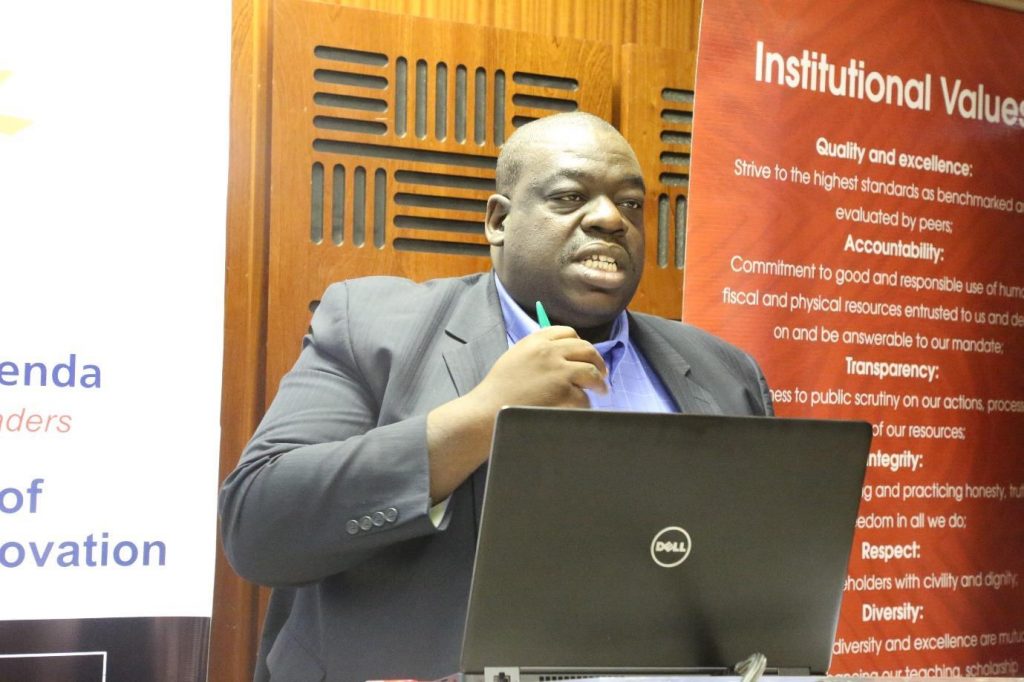 Dr Vusimuzi Malele from the Department of Science and Technology

Dr Vusimuzi Malele, from the Department of Science and Technology during the Research Indaba Workshop shared his knowledge with the audience on inclusive innovation in South Africa and the role actors in entrepreneurial research development and innovation. “It is advisable that as researchers, you shouldn’t exclude knowledge holders as they are the ones who have innovation ideas that can help with the research project.” He further alluded that the university together with researchers should consider looking first on those around them and consider changing their research for entrepreneurship. 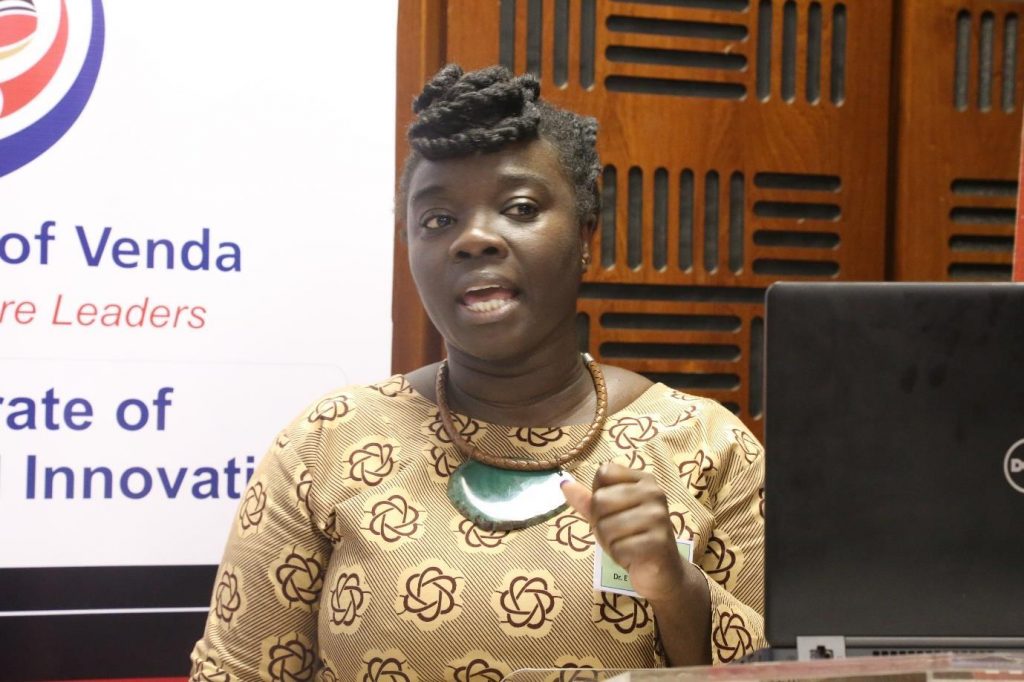 Dr Eunice Ubomba Jaswa, Manager Water Research Commission presented on sharing global perspective: Focus in emerging Contaminants in water wherein she urged researchers to also consider doing their research on water contaminants as it is one of the challenges that most of the south Africans are facing. 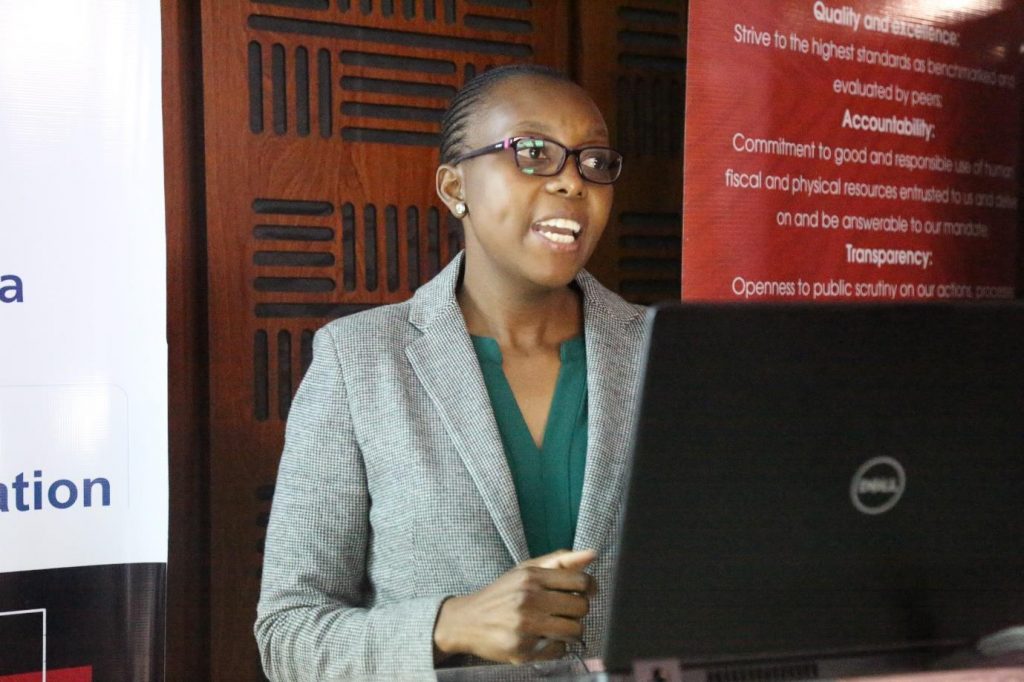 The National Intellectual Property Management Office represented by Ms. Mantwa Kgarume, warned researchers to register and own their research ideas before it could be stolen and used by someone else. She also informed the audience that there are a number of researchers whose ideas have been stolen and used for the benefit of others, hence there is nothing they can do if that person or researcher didn’t register his idea with NIPMO to protect his research work.

Research Indaba workshop was followed by the Research Open day on Friday, 04 October 2019 at the University’s Research Conference Centre parking. Researchers and stakeholders had the opportunity to showcase their research work through posters.

UNIVEN research week attracted stakeholders from all spectrum, be it government and private sectors. 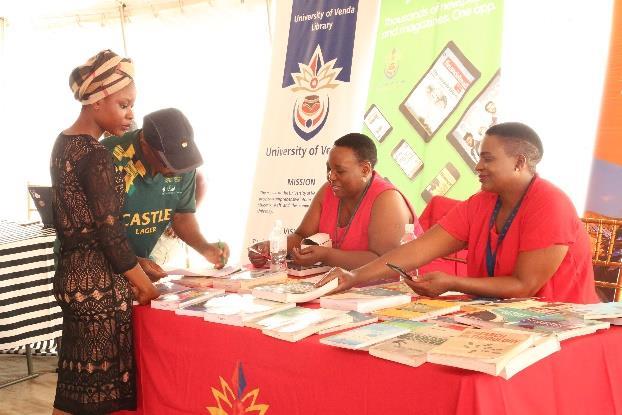 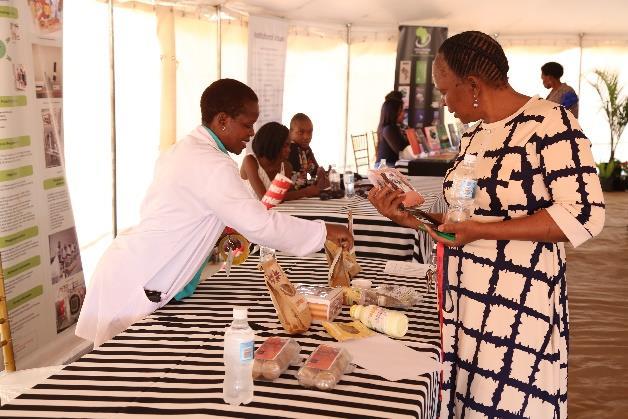 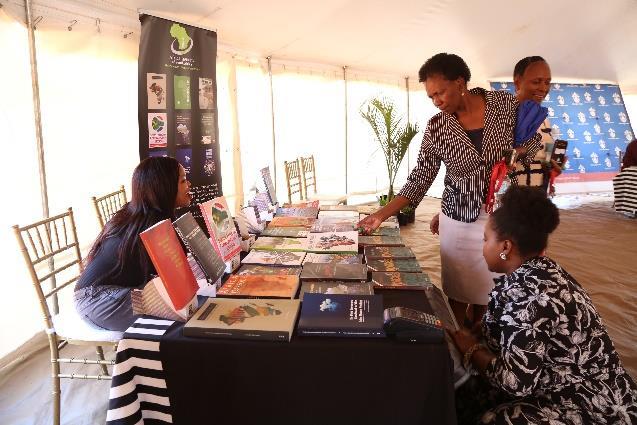 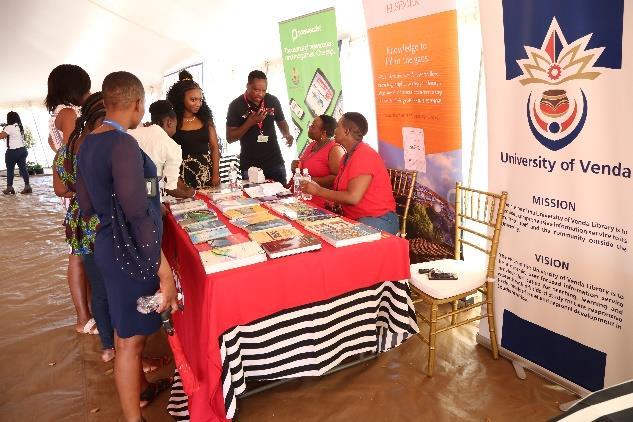