The University of Venda (Univen) Sport and Recreation Unit under the Student Affairs Department, participated in the International Goalball Tournament organized by the International Blind Sport Federation (IBSF) from 12 – 16 December 2019 in Ghana, Cape Coast University Sport Hall. The Tournament was organized by the Cape Coast University in partnership with the Ministry of Youth and Sports in Ghana, National Sports Authority of Ghana, and National Paralympics Committee of Ghaha.

The Tournament was graced by participation of two (02) international clubs (University of Venda – South Africa and Team Nigeria), one (01) national club (Team Ghana) and Host Club (Cape Coast University) with a total of 47 participants inclusive of players, coaches, technical officials and facilitators. UNIVEN had a total of 10 delegates, comprising of one (01) member of staff (Mr. N.P Mugwedi -Sports Administrator) and nine (09) students (five females and four males), who travelled to Ghana to form part of the prestigious Tournament. 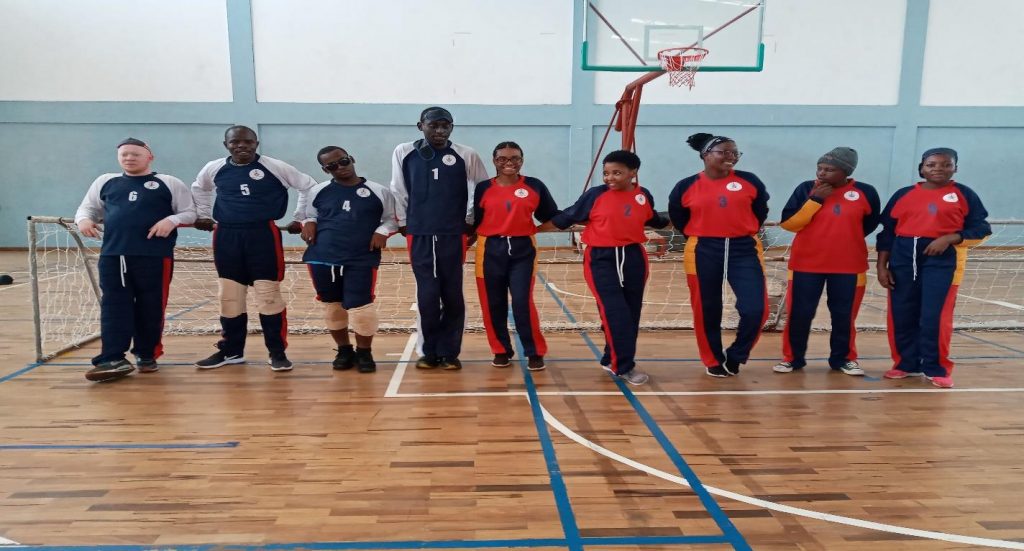 UNIVEN Goalball team posing for a picture at the Tournament

The Tournament was preceded by the coaching seminar and workshop aimed at training and empowering goalball referees, scorers and judges. The workshop was facilitated by two representatives from the International Blind Sport Federation (IBSF), Mr. John Potts (from USA) and Mr. Alexey Baryaev (from Russia). On behalf of UNIVEN, Mr. Ndiafhi Percy Mugwedi (Sports Administrator), Ms. Windy Roselyn Mthombeni (SRCC Chairperson) and Mr. Themba Baloyi (Team Coach) attended the workshop and were awarded two certificates for coaching and refereeing during the awards giving ceremony. All other players who participated during the Tournament were also awarded certificates of participation at the IBSF Tournament. The team was also given a new match ball for use during training and competitions. 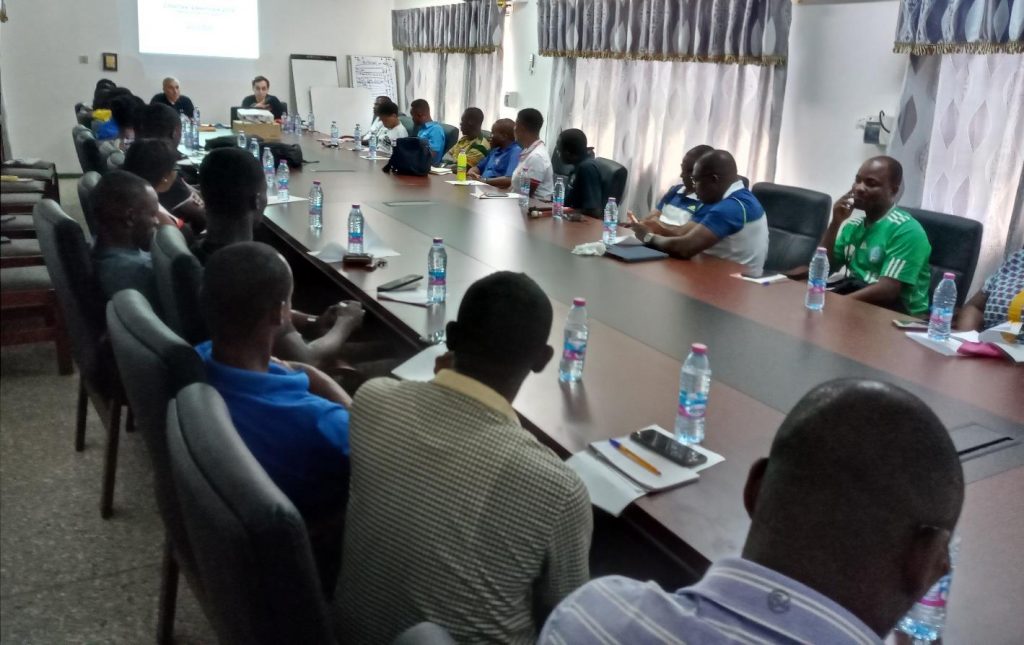 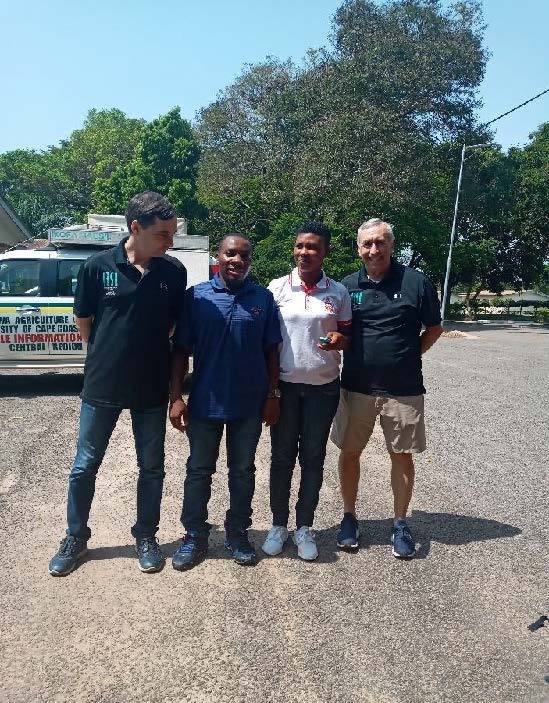 Mr. Ndiafhi Percy Mugwedi with Facilitators who handed over certificates to UNIVEN delegates 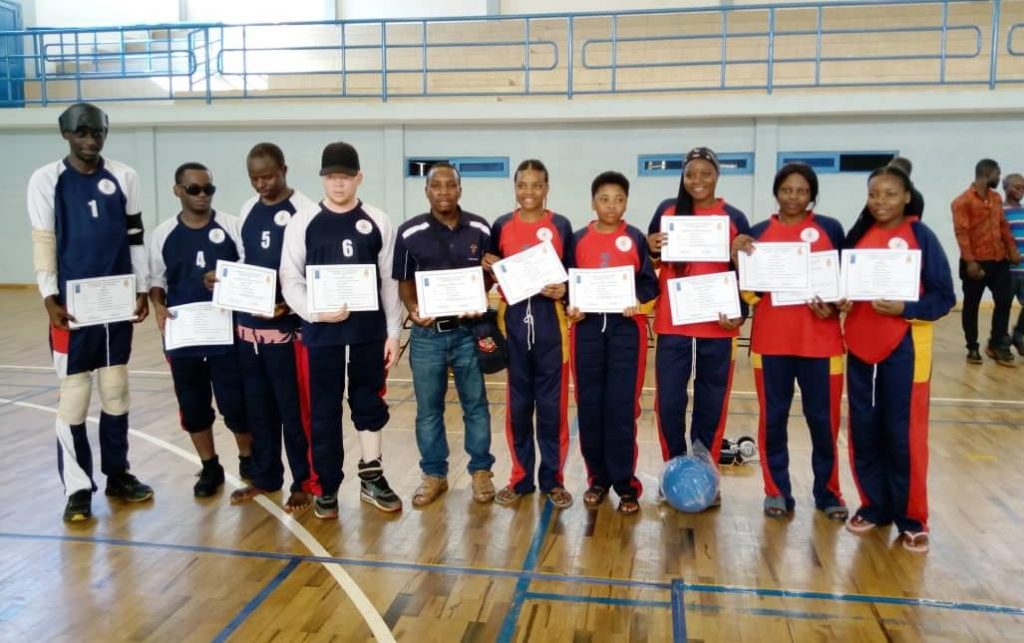 Above: UNIVEN delegates displaying certificates at the end of the workshop

UNIVEN female goalball team played and won two games during the Tournament while the male team won a final game through walk-over due to the opponent failure to honor the game on time and as such IBSF rule was applied. However, the team played and lost a consolation game against Team Ghana. Both teams displayed outstanding performances and were crowned the African Champions. Below are the results of the Tournament:

The purpose of the Tournament was aimed at developing and promoting the Goalball Sport in Africa under the umbrella of International Blind Sport Federation (IBSF). The Tournament also exposed students to practical application of rules during the game and hands-on experiences of the goalball tactical and technical aspects of the game.

UNIVEN Goalball team has over the years produced outstanding results which is in support of the University’s Strategic objective of enhancing the quality of student life outside the class room. It is pleasing to acknowledge that the Sport and Recreation Unit continues to achieve its mandate guided by the University Stragetic Plan through increasing the number of students participating in adapted sports.

“On behalf of the delegation, I would like to thank the University Manamagement for granting us the opportunity to promote the University of Venda brand and its values through sport, particularly using goalball as an adapted sport for students living with various forms of disabilities. It is worth noting that goalball is the first sporting code at UNIVEN to compete and display great performance at an international level”. added Mugwedi – Sports Administrator.

The International Blind Sport Federation (IBSF) has mandated the University of Venda to partner with other universities that play goalball in South Africa such as Stellenbosch University, University of Cape Town and University of Limpopo in growing the popularity of goalball as an adapted sport and especially in establishing a well structured and functional goalball federation. The Sport and Recreation Unit will continue to support and monitor goalball team to embrace the University values and its mantra in creating future leaders through sport participation.