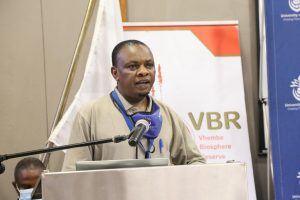 Prof Joseph Francis is an academic and rural development practitioner who holds a PhD in Animal Science obtained from the University of Zimbabwe. His PhD research focused on an examination of smallholder dairy farming as a vehicle for rural development within the context of integrated crop-livestock systems. Prior to his appointment as Associate Professor in the Institute for Rural Development (IRD), he served as a Senior Lecturer in the Institute for Youth Studies at the University of Venda (UNIVEN) from August 2004-July 2007; Postdoctoral Fellow in the University of Pretoria’s Postgraduate School of Agriculture and Rural Development (June 2002-August 2004) and Lecturer at the Zimbabwe Open University (February 1998-June 2002). As the Director of the IRD, his responsibilities encompass research, teaching, community-engaged work, resource mobilization, and leadership and management of the IRD.

Throughout his academic life, Prof Francis has extensively worked with grassroots communities in various countries in Southern Africa (in particular Botswana, Lesotho, Mozambique, South Africa, Swaziland and Zimbabwe) as one of the champions of the WK Kellogg Foundation-funded Integrated Rural Development Programme (IRDP). During the past ten years, he concentrated his work more in the rural areas of Limpopo Province in South Africa. His exemplary leadership and acumen in community-engaged scholarship have been demonstrated through the on-going Amplifying Community Voices programme. In 2008, the latter programme won a silver award in the Impumelelo Innovation Trust competition followed by third prize of the MacJannet Prize of Global Citizenship in June 2011. Another significant milestone in the growth and development of ACV has been the fact that it gave birth to the Amplifying Community Voices Students Association (ACVoSA), which was officially recognized as a bona fide student organization at UNIVEN and subsequently launched in November 2012. The ACV approach is gaining widespread recognition as a potential roadmap for constructing community-owned municipal development plans or strategies, especially in Vhembe District. In recognition of the importance of the engaged work that Prof Francis is championing with students at UNIVEN, in 2012 the Talloires Network-Kettering Foundation invited him to package a chapter, “Amplifying Community Voices in South Africa: Nurturing Transformative Leaders for Rural Development“ for inclusion in a book that showcases exemplary university academic staff-led initiatives.

Prof Francis’s deep knowledge and experience with application of participatory tools in development practice saw him being requested by Vhembe District Municipality to facilitate stakeholder engagements that culminated in the establishment of the highly vibrant Vhembe District Land Development Forum. It is also worth noting that between 2005 and 2011 he served as the lead facilitator of multiple stakeholder engagements on skills development at the request of the Local Government Sector Education Training Authority (LGSETA) in Limpopo and Mpumalanga Provinces.

Prof Francis’s competencies include both academic and participatory process facilitation. He has vast experience in smallholder dairy farming; research; postgraduate student supervision; field application of participatory development techniques; monitoring and evaluation of development programmes; rural development; participatory community development planning; community empowerment; local government and open learning or distance education. So far, he has co-authored a book entitled, “Performance and Nutritional Management of Draught Cattle in Smallholder Farming in Zimbabwe,” four chapters in books and more than 30 peer-reviewed scientific research papers published in various journals. Also notable is the fact that he has presented approximately 80 papers in conferences and symposia. The fact that Prof Francis has so far successfully supervised 27 research-based Masters and 14 PhD students speaks volumes about his standing in academic circles.

Among the collection of self-study books/manuals he authored for smallholder farmers and grassroots community members’ use is “Fodder Banks in Livestock and Dairy Production with Drought in Mind.” The latter booklet has to date been translated into more than four languages in Eastern and Southern Africa, mainly as a result of the high demand for it.