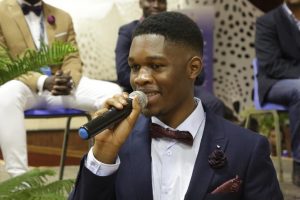 During his Opening speech, the Chairperson of the School of Agriculture, Mr Munyaradzi Makoto advised the students not to study for the purpose of passing but to also learn how to practice their skills. He told them to be ready to overcome the challenges after completing their studies. “South African graduates should be ready to use the land to produce products that will also be exported. This will not only eradicate scarcity of employment but will also boost the country’s economy.” He alluded that now people are fighting to reclaim their land back but is the country ready to utilize the land after winning the battle of land reform?
Mr Makoto strongly orated that, should South Africa win the battle of reclaiming the land, he does not want to see, a situation where we have the land that is not used. He further echoed that Agricultural sector is the number one employer in South Africa currently and without the presence this sector people will starve. 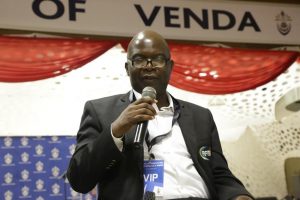 Mr Tshianeo Mathidi says not all graduates want to be entrepreneurs

“Agriculture controls the global economy but it is not everyone who want to be an entrepreneur,” said the President of Limpopo Farmers Association, Mr Tshianeo Mathidi. Mr Mathidi further said that some people want to be employed by government or private sector while others want to be academics. “In farming, without the land you will not survive. If you want to be an entrepreneur, you need to erase the lazy mentality and start to think about what you can do to earn a living.” He echoed that there are lot of opportunities in the sector of agriculture apart from planting crops. 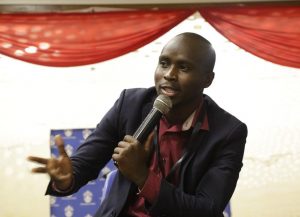 Mr Phumudzo Maphila, 4th year BSc Plant Production student says the statistics show an incline in the unemployment rate. He added that this statistics means the new graduates should start to think about how to create jobs than to look for jobs. He advised students not to be selfish and to work together by starting Agriculture related businesses. “There is a gap in this sector which needs to be filled and that is where we should come in. Government alone cannot create jobs for all, it needs our intervention,” said Mr Maphila. 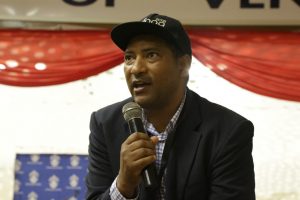 Mr Rene Munya says students should get in to muringa businesses

Mr Rene Munya from Afrinest presented on the use of Muringa plants. He said that their company has planted muringa and export the products made from Muringa to Europe. He advised students to start businesses and plant muringa trees because muringa is in demand throughout the world. Mr Rene further alluded that they are currently working with 41 farmers including Univen and he said they want to increase the number of farmers in the next two years. “We produce healthcare products, pills, and skin care products. We also help farmers to distribute their products as long as they are producing healthy products that are cultivated on a healthy land,” he said. 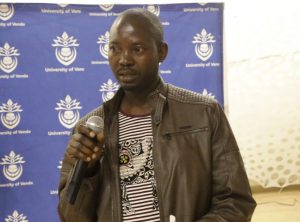 Mr Luvhengo Nyelisani, Managing Director of Vhembe Agriculture Hub and Chemistry Supply told the students that their company exists to create network among communities, entrepreneurs and farmers. He said they train emerging farmers in orded to survive in this field. “We also buy and sell agricultural products.” He advised students who do not know where they are going after graduating to go to their offices for further advice on what to do for a living. 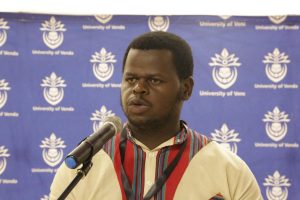 Mr Alwin Makhale, Mechanical Engineering graduate who found himself being an entrepreneur in the field of agriculture advised students to start thinking about opening their own businesses before they can even complete their studies. He told them that the little knowledge that they have from class will help them to start smaller gardens which do not need a lot of money. Mr Makhale of Vhembe Agriculture Hub and Chemical Supply said people need a lot of money from government but starting a business is not about having a million in the account. “It is a matter of starting with a garden in the backyard at home then you will grow from there.” 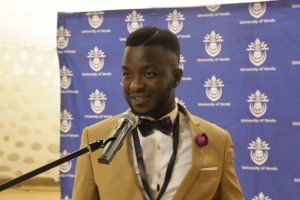 Mr Tshilidzi Mathidi, one of the youngest South African farm owners who studied Marketing has encouraged students who wants to be in business to tackle the field where they see a gap. He further told them that everything is possible as long as they are dedicated to what they want to achieve. He echoed that they will only make it in life if they believe in themselves. “Put your money where you want your future to steer. In life, if you want to make it, work hard. Let your dream be driven and accompanied by your hard work,” he concluded. 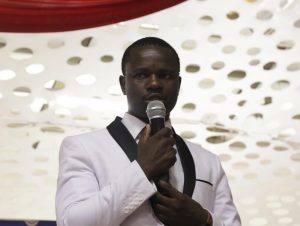 In his moral support message, Mr Talifhani Tshitwamulomoni, Executive Chairperson of Universal Greening Organisation (UGO) advised business people who graduated from Univen to employ graduates of this University. He further told them to train students about starting and sustaining businesses. 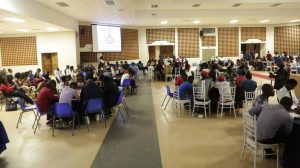