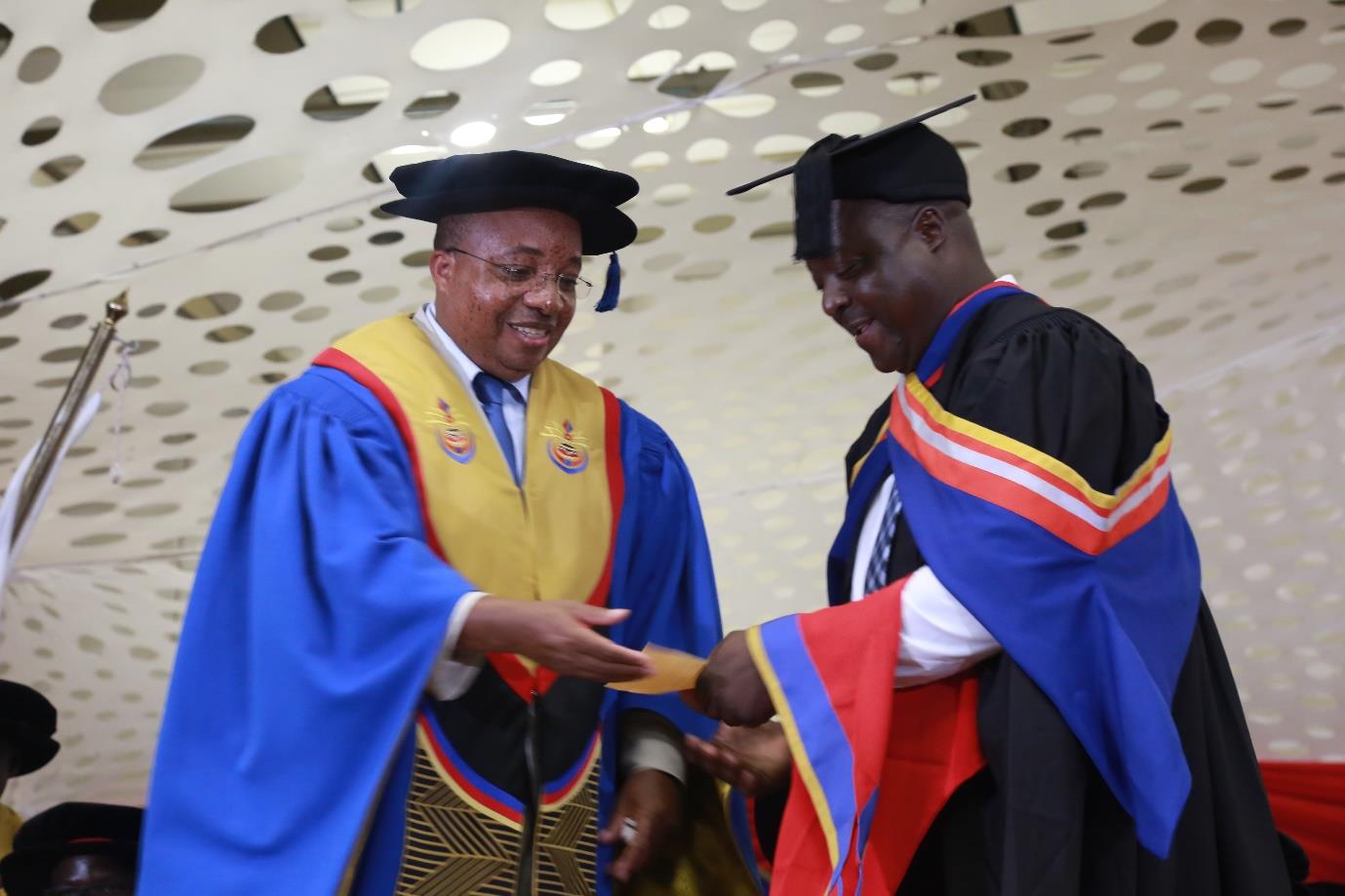 “Amongst the graduates at masters level inclusive of Mr Ndivhuwo Victor Goliada who is a staff member in Committee Administration Section. This indicates and proves to all of us the culture and priority that Univen has taken for human capital development,” Said Prof Edward Nesamvuni, the University Registrar, during his Address at Univen May Graduation ceremonies that was held on Thursday, 18 May 2017.

He said on the three Doctoral Degrees awarded in the School of Management Sciences, “one is for a member of the Executive Committee of Institutional Forum, the other for a retired member of Staff and lastly for a former employee of Univen.”

“I would like to congratulate the Deans, all the academics and academic support staff who worked so diligently with these graduates, often in the face of enormous challenges. You ensured that they are more than ready to take their rightful places in the world. You provided the knowledge and the skills that empower them to play their part in creating a better future, not only for themselves and their families, but for their communities, their country, and the world at large.”

Indeed, Univen is creating future leaders. During the graduation we witnessed Tshepo Raseala, Deputy Secretary of SRC graduating his Bachelor of Arts in International Relations degree with a distinction and he was the overall best student in the School of Human and Social Sciences. The Secretary General of the SRC, Mr Sandile Bob Masango graduated Bachelor of Arts in Criminal Justice. The Academic Policy in the SRC coupled with the Student Development Project is bearing fruits. The former SRC Secretary General and former President Mr Mpho Mutobvu also graduated his Bachelor of Commerce Honours in Business Information Systems. “We congratulate you SRC President, Mr Mandla Sikhwambana, for this great achievement and commitment. Management is committed to support you and your cabinet throughout your term of office to put the Students at the Centre of the University Business”, added Prof Nesamvuni.

He further told the audience that: “The greatest act of leadership is mentoring. No matter how much we may learn, achieve, accumulate, or accomplish, if it all dies with us, then we qualify to be a generational failure”. Prof Nesamvuni said it is the University’s commitment to create future leaders who will sustain the democracy that our forefathers died for. Prof Nesamvuni further expressed that, it takes Pastoral Counselling and grooming for young people to grow as leaders and take responsibility in society. “It takes our Political Leaders – Traditional Leaders to protect, service and guide our communities out of poverty, unemployment and intolerance. Our guardians, parents, relatives and spouses supported us throughout the journey of this enormous achievement.” He further told graduates to thank the people who gave them support during their studies. “A strong family structure beyond the home nurtures a rounded personality that leads itself to success like they say it takes a village to raise a child.”

He told the graduates that they have left an indelible legacy of excellence, achievement and tradition for generations to come. “I would also like to pay tribute to the academics, administrative and support staff for providing the necessary support during your stay at the Univen. They have indeed played an extremely instrumental role on you as future leaders,” he said.
“Our autumn graduation ceremonies take place during Africa month, which culminates at our University in our Africa Day celebrations on 25 and 26 May.

He further said it is the very diversity in the student body that enriches the learning environment at Univen, a total number of 247 international students link our University to a footprint in Botswana, Ghana, Cameroon, Kenya, Nigeria, Swaziland, Zimbabwe, and beyond. About twenty one international students (33%) graduated and some at the level of Masters and Doctoral degrees. “Our contribution to the region and continent can further be improved by financial and material support to develop sustainable and integrated Africa.” “To you Graduates remember to celebrate and to cherish; but, with a sense of reality at the back of your mind about what your role in our society should be, about that dream you have to safeguard and not allow anyone to turn it into an enduring nightmare.” He concluded.