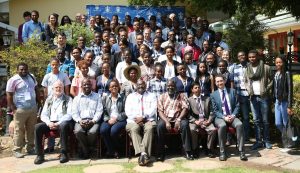 Climate change is a global issue and the future climate has become more important than ever before.

The conference was held under the theme, ‘Challenges of a warming planet’. The theme was selected following the recent record warming as 2016, 2015 and 2014 became the hottest years globally since instrumental records began more than 150 years ago. 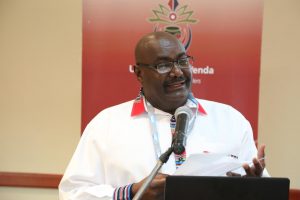 The conference was opened by Univen Vice-Chancellor and Principal, Prof Peter Mbati who said “It has been brought to my attention that the Limpopo region is of special interest to atmospheric scientists because it is a drought prone region where El Nino impacts are most significant. Some of the wettest stations in the country are found in the Soutpansberg Mountain Range in the north-eastern escarpment where seasonal rainfall often exceeds 2 000 mm.”

Prof Mbati said Univen has plans to establish a research group on meteorology, climate science and air quality following the successful model of the Climate Systems Analysis Group at the University of Cape Town. “I am glad we have 15 of our graduate students participating in this conference who will present their research and also learn from the more experienced experts,” Prof Mbati added.

Prof Mbati further said Univen intends to introduce a new Bachelor of Earth Sciences degree program in Hydrometeorology in future. “This will integrate meteorology and hydrology modules with applications to water management. Water itself is a critical resource in Limpopo. We have also reached an advanced stage of setting up a Bachelor of Disaster Risk Science degree, which should be of interest to you considering that more than 90% of natural disasters in South Africa are related to extremes of weather, climate and water.” 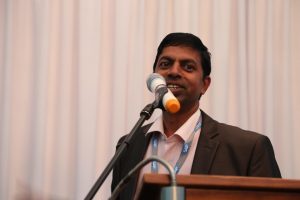 The president of SASAS, Prof Sivakumar Venkataraman, applauded Univen for organizing a successful conference. “The local organizer has done an excellent job organizing the conference and familiarizing us with the venue,” he added.

Prof Venkataraman said major topics presented on SASAS annual conference are not only confined to atmospheric structure and dynamics but also include meteorology, agro-meteorology, climatology, air quality, hydrology, atmospheric interactions, remote sensing techniques, numerical modelling and oceanography. “We in the SASAS committee, believe that the introduction of peer reviewed conference proceedings over the past 7 years has improved the quality of South African atmospheric science research. It might have also enhanced number of young researchers to write a quality research output and thus their research career,” said Prof Venkataraman.

Prof Venkataraman also presented on ‘A short review on N02, SO2 pollution studies over Durban’. “Air pollution is a major problem of the new millennium and it has become increasingly clear that human activities are playing an important role in the cycling of trace gases in the atmosphere.” 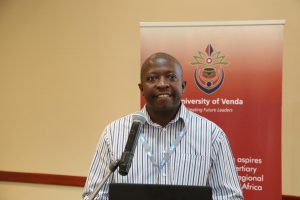 “A unique feature of this annual conference is that the keynote and invited speakers are all South Africans recognizing and celebrating contributions our own experts have made to the field of the atmospheric sciences globally,” said Dr Hector Chikoore SASAS 2017 Conference Chair. 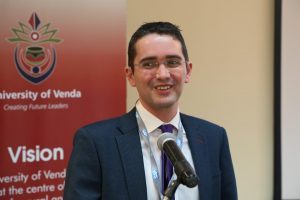 Day one keynote address was delivered by Prof Francois Engelbrecht whose topic was ‘Can the 2-degree global temperature goal save Africa from dangerous climate change?’

Prof Engelbrecht said African temperatures are projected to rise rapidly under low mitigation climate change futures, at 1.5 to 2 times the global rate of temperature increase. “This high regional climate sensitivity in combination with the relatively low adaptive capacity implies that the global climate change mitigation effort is of crucial importance to Africa. In particular, the Paris Agreement aims to keep the global temperature increase during 21st century below 2 ºC compared to pre-industrial levels,” Prof Engelbrecht highlighted.

“Global temperatures have risen by about 1ºC since the industrial resolution and this change may be attributed to anthropogenically enhanced greenhouse effect. Collapse of Larsen C ice shelf has occurred in a part of Antarctica that has warmed significantly in recent decades.”

Prof Engelbrecht is a Chief Researcher in the Natural Resources and the Environment Unit (NRE) of the Council for Scientific and Industrial Research (CSIR) in South Africa. 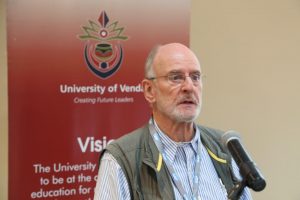 Prof Pegram is an Emeritus Professor in engineering and Senior Research Associate at the University of Kwazulu Natal. 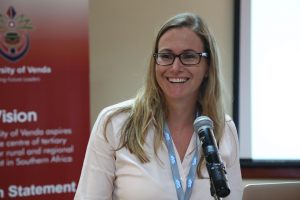 Day two invited speaker was Prof Natalie Burls from Centre for Ocean-Land-Atmosphere Studies at George Mason University, USA. Prof Burls’ presentation focused on ‘Wetter subtopics in a warmer world: contrasting past and future hydrological cycles’. Prof Burls research’s focused on improving the understanding of the key processes determining earth’s climate and climate variability on a variety of timescales ranging from seasonal to decadal to much longer geological scales.

Prof Burls said: “During the warm Miocene and Pliocene epochs, vast subtropical regions had enough precipitation to support rich vegetation and fauna. Only with global cooling and the onset of glacial cycles some 3 million years ago, towards the end of the Pliocene, did the broad patterns of arid and semi-arid subtropical regions become fully established.” 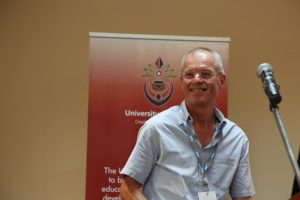 Prof Reason said Southern Africa is essentially a narrow peninsula-like landmass bordered to its south, west and east by oceans.

Day 2 keynote address was delivered by Prof Chris Reason from the Department of Oceanography, University of Cape Town who presented on ‘What is unique about the oceans around Southern Africa and how does it influence our climate?’

Prof Reason said Southern Africa is essentially a narrow peninsula-like landmass bordered to its south, west and east by oceans. “Its termination in the mid-ocean subtropics has important consequences for regional climate since it allows the strongest western boundary current in the world ocean to be in close proximity to an intense eastern boundary upwelling current. Unlike other western boundary currents, the Agulhas retroflects south of the landmass and flows back into the South Indian Ocean thereby leading to a large area of anomalously warm water south of South Africa that may influence storm development over the southern part of the landmass as well as seasonal rainfall,” Prof Reason added. 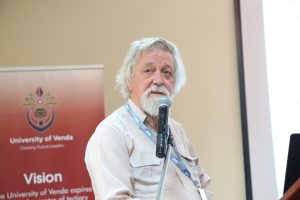 Dr McGregor said the Conformal-Cubic Atmospheric Model was the first atmospheric GCM to be formulated on a cubed-sphere grid. “CCAM employs semi-lagrangian, semi-implicit dynamics, which handles the finer resolution near the vertices without a time step penalty. It also uses reversible staggering in the horizontal to achieve good dispersion properties and kinetic energy spectra,” Dr McGregor added.

“Recently the CCAM code has been generalized to utilize the Uniform Jacobian (UJ) variation of the cubed-sphere grid. This grid is derived from the conformal-cubic grid to provide equal area for every grid cell.” 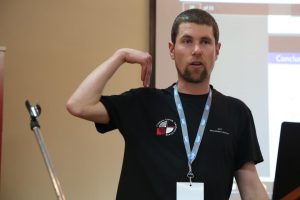 “Near-term climate prediction is progressively becoming a more prominent component of climate projection, as can be seen, for example in the CMIP6 experimental design. Concurrently, Multi-year drought and extreme heat occurring across multiple climate zones of Southern Africa emphasises the potential impact over this region of seasonal to decadal-scale variability, superimposed on a long-term climate change signal,” said Mr Stefaan Conradie, a PhD student at the University of Cape Town.

Mr Conradie’s presentation focused on ‘Assessing the co-variability of modes of variability and Southern African climate in the 20th century reanalysis using various metrics’. Conradie said the aim of the presentation was to map out previously investigated modes and spatio-temporal patterns of variability in the wave, including a range of proposed metrics for wave amplitude, position, mean structure, baroclinicity, seasonality, breaking and propagation. 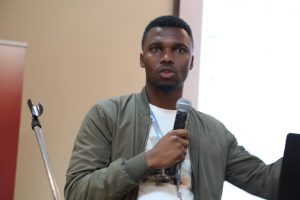 Xulu said the study investigates the spatio-temporal variability of the Mascarene High over the South Indian Ocean on (anomalous) weather and climate over Southern Africa at intraseasonal, seasonal, interannual, multidecadal and event time-scales. “Subtropical anticyclones locate and modulate weather and climate over subtropical belts for both the Northern and Southern Hemisphere. 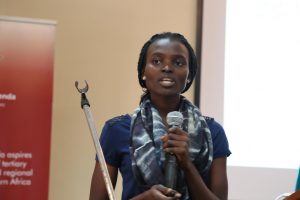 Ms Tshiwandalani’s study seeks to investigate and analyse the anomalous 2016/17 rainfall season and to compare it with what is considered normal using the long term mean data from 1988-2017. 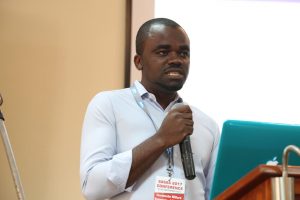 Mr Zvarevashe said the global temperature is increasing at an average of 0.13 degree Celsius per decade since 1990. “South African rainfall and temperature is influenced by several climatic variables. Many methods have been used to identify the impact of the climatic variables but have underlying assumptions such as linearity and stationarity of the data,” Mr Zvarevashe added.

Day 2 of the conference also coincided with a day of meteorological significance as 22 September 2017 was the spring equinox in the Southern Hemisphere. It is a day when the sun’s disk is directly overhead the equator heralding the approach of the early summer to Southern Africa. 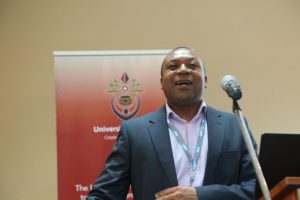 Mr Chabata said broadcast meteorology has held an important position in many societies around the world since the arrival of radio and television. “Many radio listeners and television viewers have always accepted broadcast meteorologists as authorities in their field, thereby helping them to easily and effectively communicate weather projections to their audiences,” He added.

Mr Chabata further said: “With climate change and global warming having become a global reality and topical issue, broadcast meteorologists have found themselves having to disseminate information on these two topics to their audiences in one form or the other. Climate scientists often communicate their findings in journals and conferences which the general public has limited access to.”

The two-day conference consisted of 53 oral presentations in four plenary sessions and six parallel sessions. 26 poster presentations were made during the poster sessions on day 1. By far the larger proportion of delegates were graduates from seven universities. “We have decided to develop capacity by assigning students to chair sessions, taking note of geographical spread,” Dr Chikoore said. 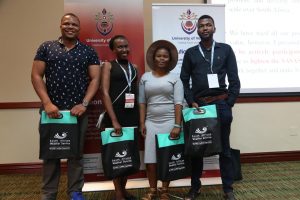 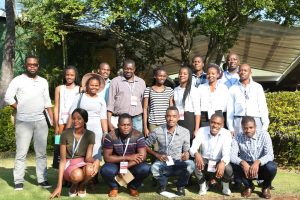 The conference was attended by about 100 delegates from 16 institutions including international delegates from Australia and USA. It was co-sponsored by the Alliance for Collaboration on Climate and Earth Systems Science (ACCESS), South African Weather Service (SAWS) and SAP. The 2018 SASAS annual conference will be held in KwaZulu-Natal.