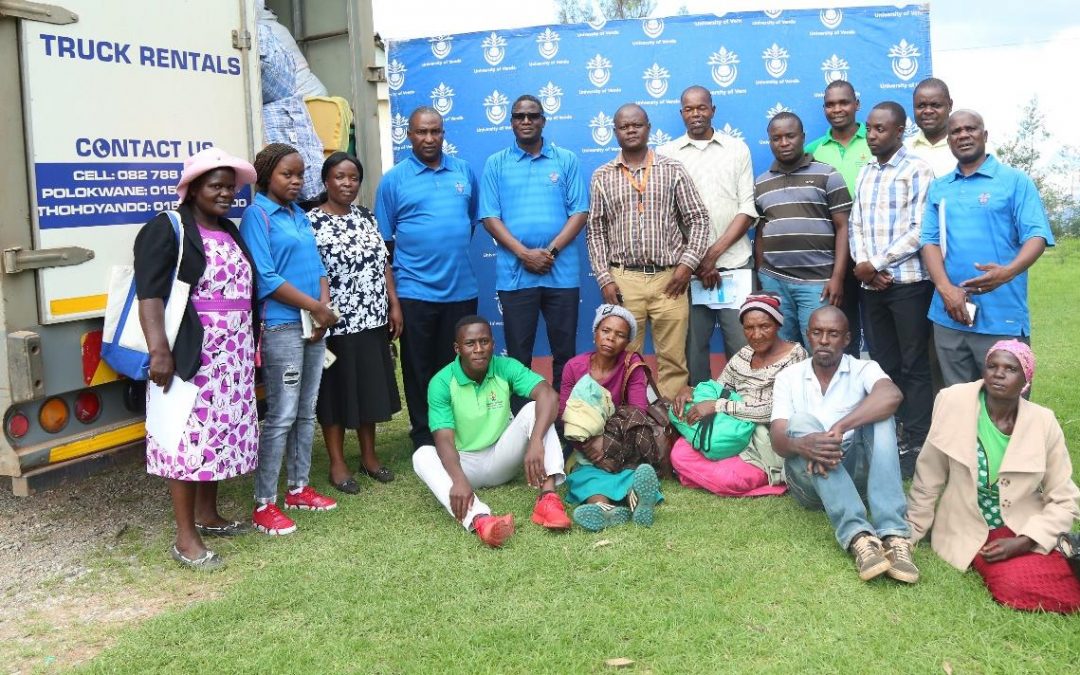 Cyclone Idai, which triggered massive land falls in Mozambique from 14 March 2019 hit Chimanimani District in eastern Zimbabwe the day after. The United Nations described it as “one of the worst weather-related catastrophes in the history of Africa.” About 1 300 people in Malawi, Mozambique and Zimbabwe were killed, with a further half of this number still unaccounted for. In Zimbabwe, the cyclone caused damage estimated to be $622 million. Sources of livelihoods for more than 50 000 households were destroyed, directly affecting 270 000 people. It is reported that 60 000 people were displaced. At least $1.1 billion is needed to support the country’s recovery, which includes reconstruction of damaged infrastructure and restoration of lost sources of livelihoods. This humanitarian crisis prompted the Institute for Rural Development, to roll out on behalf of the University of Venda, a campaign that mobilized donations from individuals, organizations and institutions. 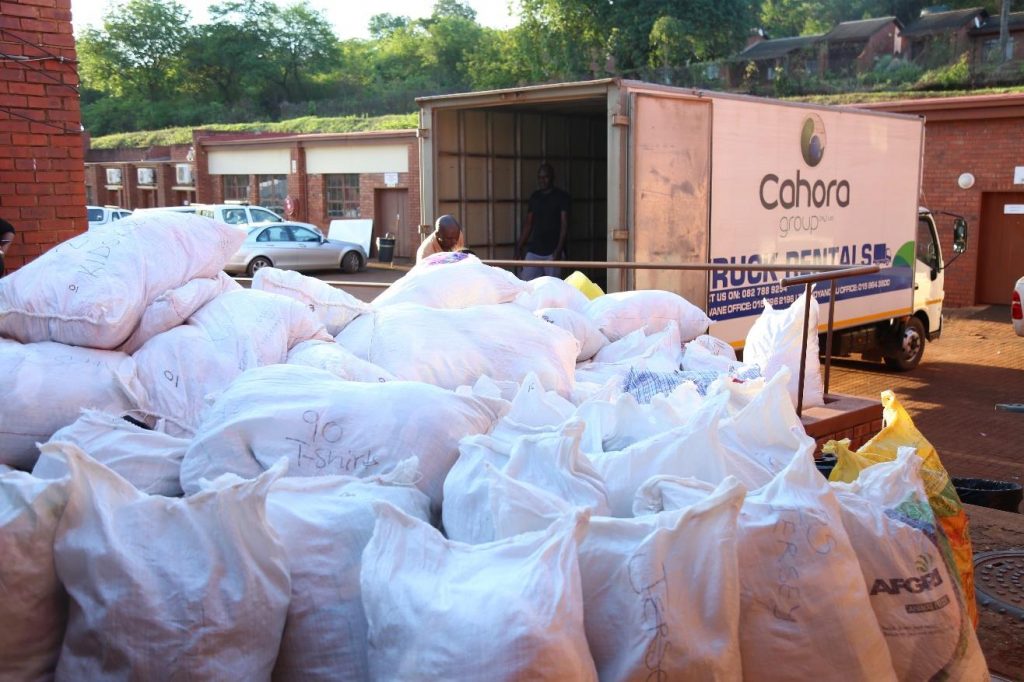 Loading donated goods into a truck prior to transportation to Chimanimani District, Zimbabwe 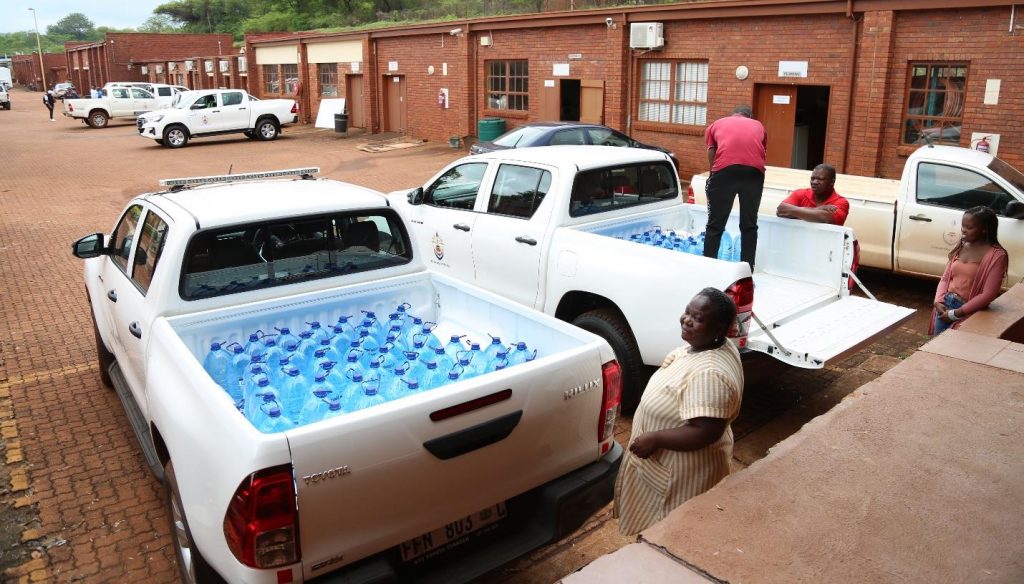 From 26-28 November 2019, Dr Bernard Nthambeleni (the Vice-Chancellor and Principal of UNIVEN) led a 16-member delegation, comprising staff and students, visited Chimanimani District to deliver goods that the university and its partners mobilized.

Day 1 of the visit (27 November) began with an official handover of goods ceremony. Mr Lloyd Kasima (the Assistant District Administrator) addressed the 3

UNIVEN delegation and local representative groups. He revealed that Tropical Cyclone Idai destroyed more than 400 houses. In addition to this, at least 300 people were still missing and presumed to have been killed. He said, “We don’t even know where they are. Very few people were found and were officially buried.” Narrating the ordeal of that fateful night, Mr Kasima revealed that he still remembered vividly the events of that night. Communication with people from other areas was impossible, which meant that the locals could not ask for assistance mainly because electricity was cut and there was no cellphone network coverage. Continuing with his briefing of the attendees at the official handover ceremony, he said “We had a very bad experience and that night was so disastrous that I will never forget what happened.” Mr Kasima noted that the government had restored some basic services, even though there is still a lot to be done. Appreciating external support that continues to flow into the District, he said, “Through the assistance of the government and other organizations that are donating, we are slowly but surely recovering. We thank well-wishers such as the University of Venda for seeing the need to rescue us”. 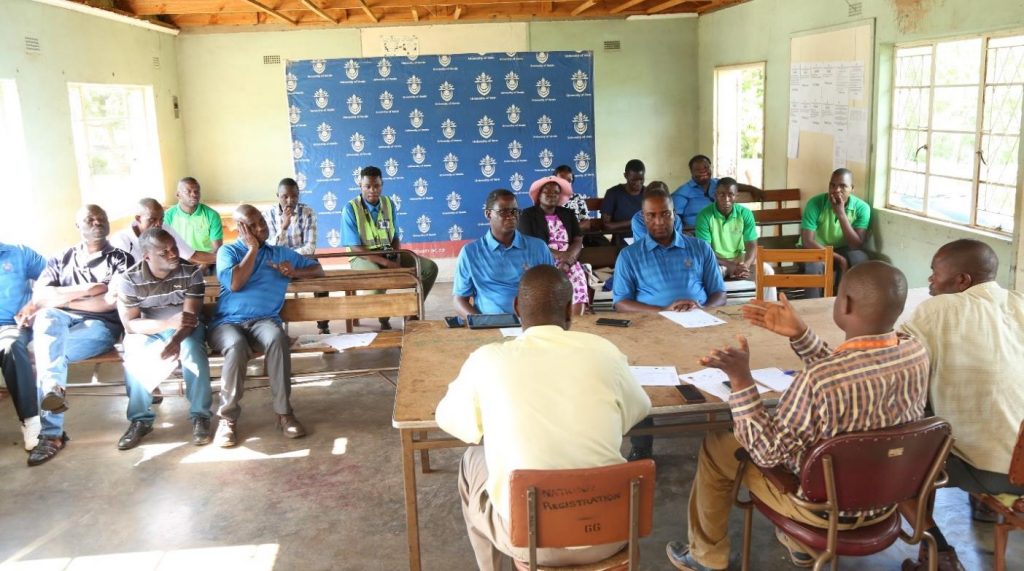 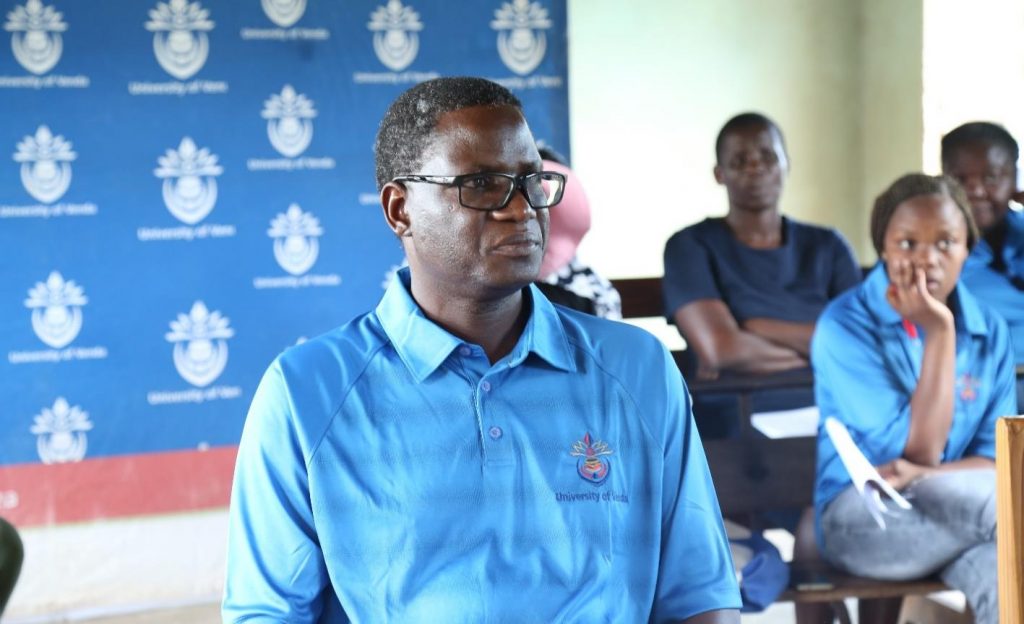 Dr N.B. Nthambeleni (left) and some members of his UNIVEN delegation listening attentively during the briefing session on Tropical Cyclone Idai

In response to Mr Kasima’s briefing, the UNIVEN Vice-Chancellor and Principal delivered a speech through which he mainly consoled those affected and local population in general. He indicated that the spirit of Ubuntu and “our Africanness” informed the university gesture. “As the University of Venda, we saw a need to go all out to ask for help from churches and many other stakeholders that we believed could assist. We couldn’t fold our hands as fellow Africans and wait for people from other continents to assist yet we are just here as your neighbours”, Dr Nthambeleni explained.

The Vice-Chancellor and Principal went on to indicate that a number of staff members and students from Zimbabwe and Chimanimani District in particular, were part of the UNIVEN family. Also, there were others who graduated from the University and were now engaged in development activities within Chimanimani and Chipinge Districts. Thus, UNIVEN couldn’t look away after that catastrophe. “We had to come up with a plan to assist the affected where possible. Furthermore, we are aware that there are other areas that were affected, including some parts of Mozambique, and Malawi. We identified this area because it is much closer to our University in geographical terms.” The Vice- Chancellor highlighted the need to continue demonstrating the spirit of Ubuntu through evidence of the fact that we care about you and all those who were affected. “….These are the times when we need to unite as Africans. We need to assist each other as brothers and sisters”, he re-emphasized.

After the official ceremony, members of the Civil Protection Unit and African Institute for Community Development in Chimanimani District accompanied the UNIVEN delegation to the camps where the most affected people are sheltered. At each camp, Dr Nthambeleni presided over the official hand over of donated items. 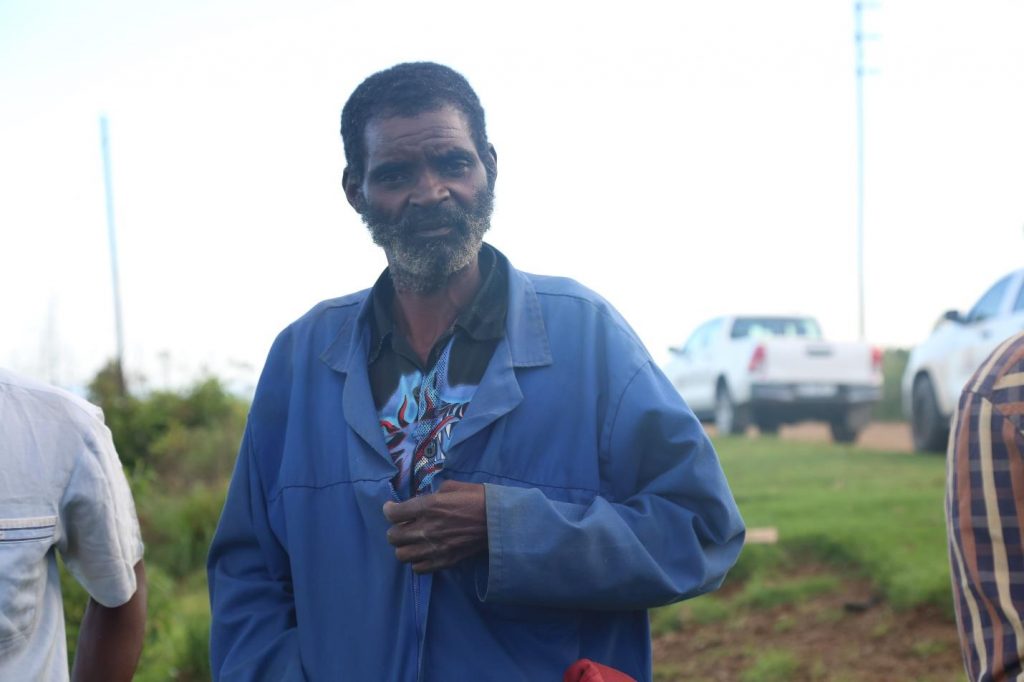 Mr Enock Mhlanga (above), a representative of Gatakata village which received some donations, thanked the University of Venda for the gesture of goodwill and solidarity. He appealed for more support because a lot of humanitarian support is still needed.

On the second day of the visit (28 November), the delegation visited Chimanimani Aboratum, Nyamatanda and Kopa Camps, which are sheltering 58, 30 and 75 households, respectively. Goods were delivered to the affected people staying in the camps. 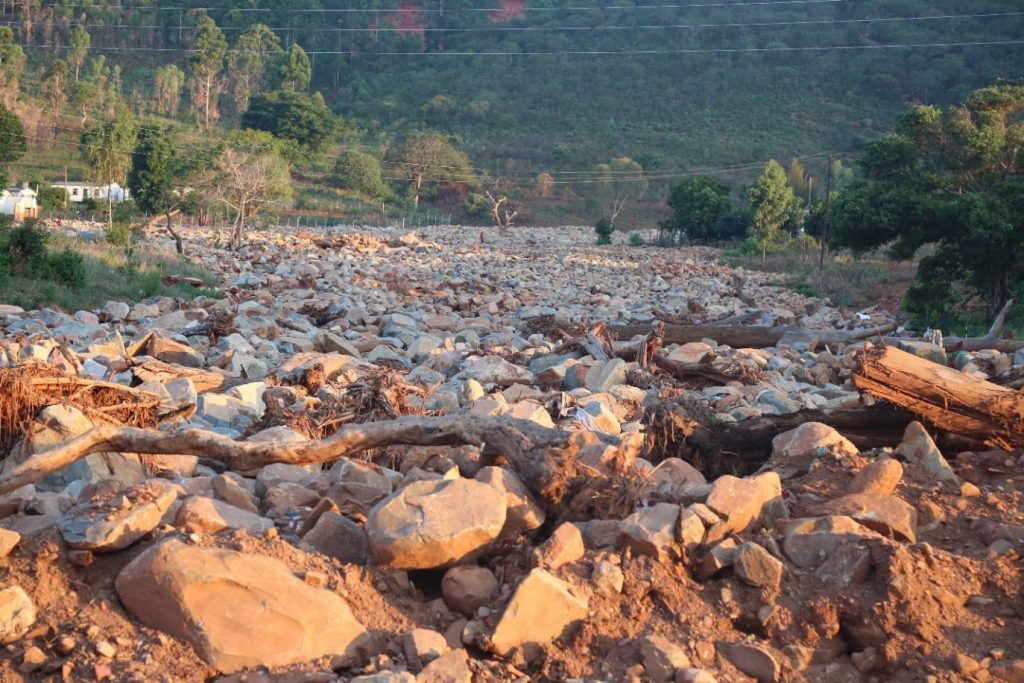 This area used to be a residential area and this is how it looks after houses were swept away by water. Rocks took over 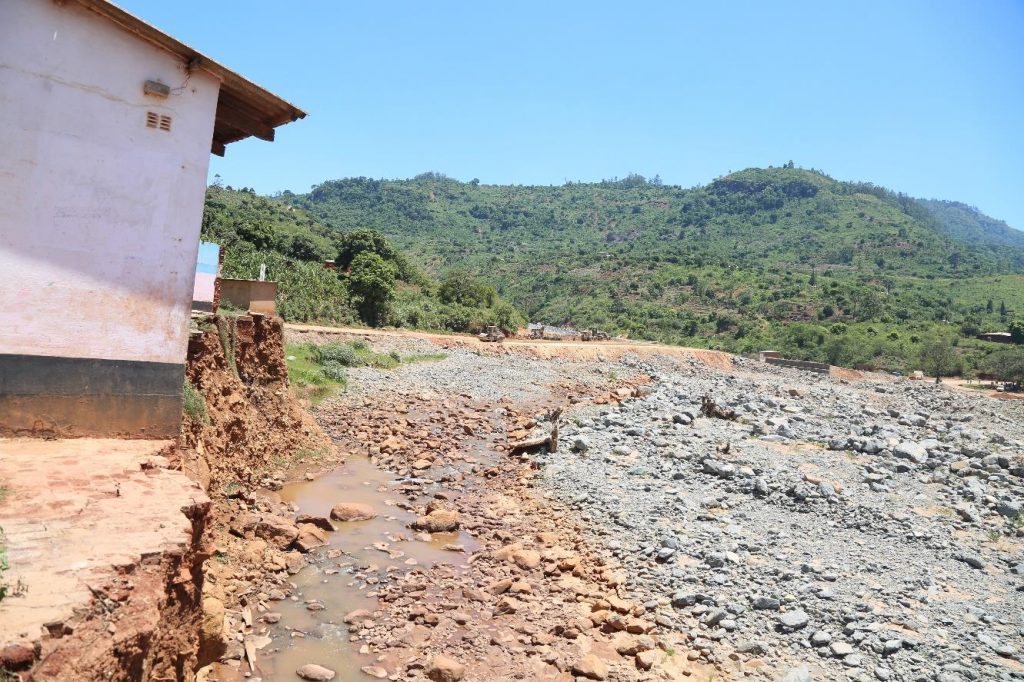 Prior to Cyclone Idai, this area was part of the village where a police station, jam factory, government and NGO offices and more than 50 houses stood 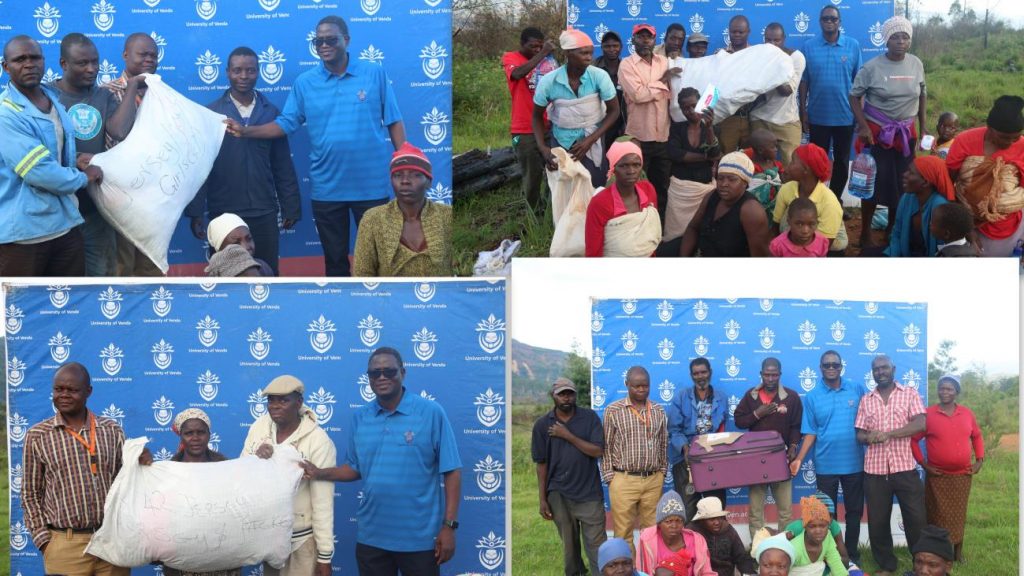