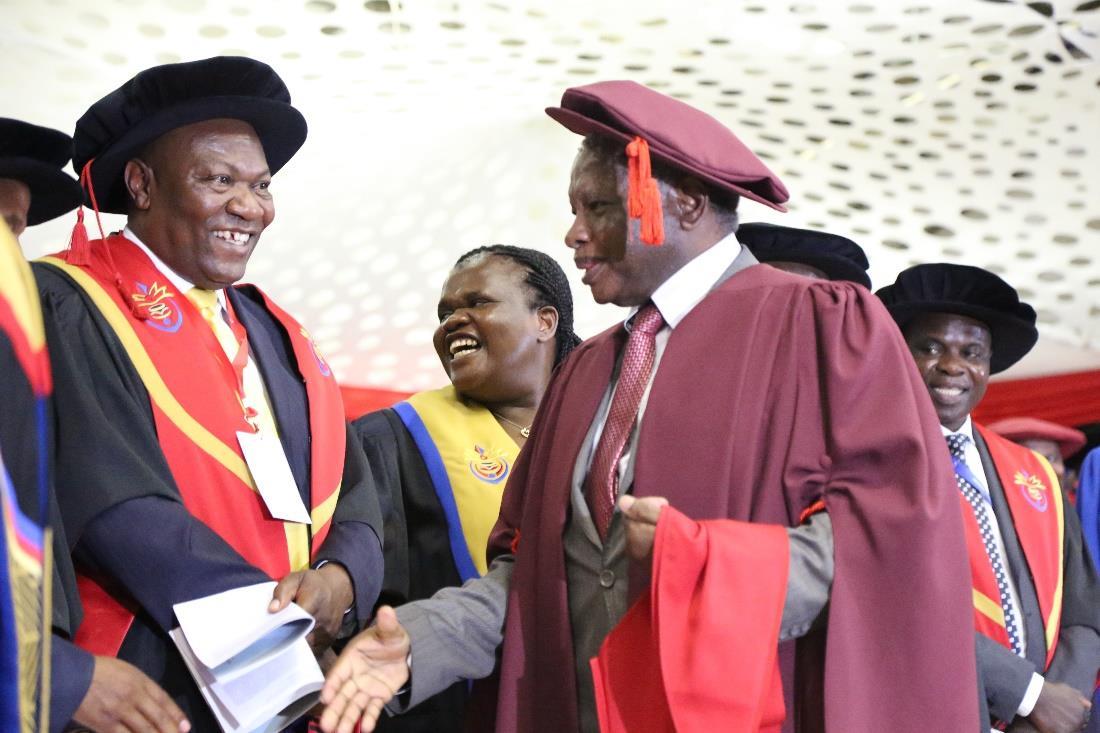 Undergraduate qualification should encourage you to further your studies -Dr Christopher Neluvhalani.

‘Examining the migration theory of black Africans into South Africa: A decolonial Perspective’ was the title of Dr. Neluvhalani’s doctoral thesis, and one of the aims of this study was to examine existing secondary material to determine whether there is agreement concerning the acclaimed migration of black Africans across the Limpopo River into South Africa. His PhD was conferred during the first session of the May 2017 Graduation Ceremony which took place on Wednesday, 17 May 2017.

He said the cause of the disparity amongst the whites and blacks in South Africa seems to have a historical origin that dates back to the epochs of colonialism and imperialism, which spanned centuries. “This study focused on highlighting the biased or twisted historical evidence against folklore and the ancient evidence of the existence of the Vhangona (meaning people living in the land of meat; the land of plenty where people will never be hungry) trapped in rocks, as supported by indigenous knowledge which was credited to pre-historic extinct human beings” he said.

His study further argued that black Africans are the autochthones of the southern part of Africa. The study concluded that there has never been any migration of black Africans into South Africa since they have always been in the country. A book ‘Kha ri Vhulunge Tshivenda (History and Folkore)” is being published based on some aspects of this
research, and he encourages people to buy it as it contains important history of the Vhavenda and other black people in the Southern part of Africa . “Hence my study was encouraged by the footprints of people and cattle on rocks that I discovered.”

Dr Neluvhalani is married to Shonisani Patricia Neluvhalani (72) and they were graced with five daughters and one son. “All my children are married and we are also graced with ten grandchildren.” The graduation ceremony in which he graduated was honoured by the presence of Minister of Public Services and Administration, Faith Muthambi.

He encouraged students not to cease studying after obtaining their first degrees. He said an undergraduate qualification is just an entry level not a stop sign, “it should encourage you to further your studies for the betterment of your knowledge and the community in which you are residing.” He said education changes everything, “even the background of where you are coming from.” He said passing the first degree shows that you are able and can be able to study until PhD level and even further. “People shouldn’t further their studies with the aim of increasing their salaries, but to increase the knowledge that they currently have and to find solutions to the current challenges that the country is faced with.”

It is essential to ignite the same passion for education in the future leaders that Univen wish to produce -Prof Jan Crafford.

In his Welcome and Congratulatory Message during the graduation ceremony in which Dr Neluvhanani’s PhD was conferred, Deputy Vice-Chancellor Academic, Prof Jan Crafford said, “This Joyful occasion belongs to you, our students, who are finally reaping the rewards of dedication and hard work, often undertaken under difficult personal circumstances.” Prof Crafford further told the graduates and the parents who attended the graduation ceremony that this day also belongs to the parents and guardians who have supported their children during tough times. “Not excluding you, the academics and academic leaders who carry out the core business of teaching, research and community engagement, often under challenging circumstances but always with dedication and passion,” said Prof Crafford.

The Univen Deputy Vice-Chancellor Academic further highlighted that the autumn graduation ceremony takes place during Africa month, which culminates at Univen in our Africa Day celebrations on 25 and 26 May. “ They also take place during the year of Oliver Tambo, when we commemorate and honour one of the greatest political leaders in our era, not only in South Africa but in our continent and globally.” Oliver Tambo was a great leader with intellect and integrity.” He said Tambo was a qualified Mathematics and Science Teacher who taught and mentored many of the struggle stalwarts who espoused like Nelson Mandela the idea that “Education is the best way to change the world”.

“We need change more than ever before, not only in our country, but in the world at large. We now send our graduates into the world and we implore them to be agents of the change we need.” Prof Crafford said among the 2017 autumn graduation ceremonies graduandi, there is one remarkable achiever. “Neluvhalani graduates his Doctoral Degree at the age of 78. He is the embodiment of that passion for education which inspired his generation and its heroes like Oliver Tambo.” Prof Crafford said it is essential to ignite the same passion for education in the future leaders that Univen wish to produce. He further encouraged Univen SRC members to also take Dr Neluvhalani as their role model by making education fashionable.

Khathutshelo Razwiedana congratulating Dr Neluvhalani and the Minister of Public Service and Administration, Faith Muthambi (middle) looking back and smiling.