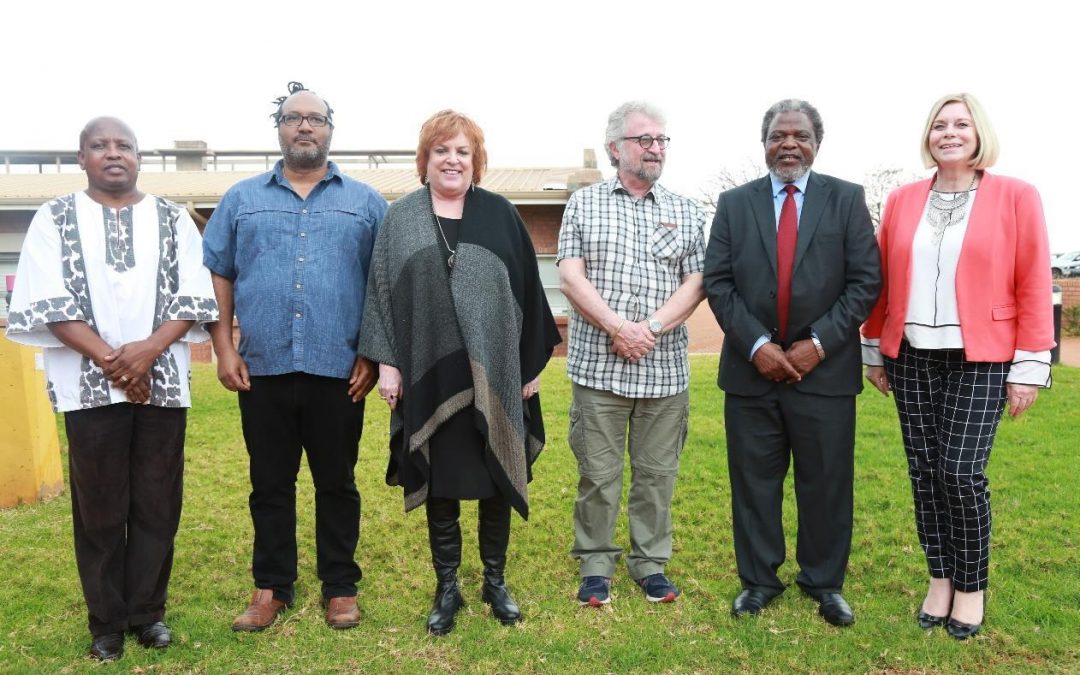 “When I look at the list of the speakers at Ubuntu seminars over the past three years, it represents the who’s who of current African scholarship and thinking on black consciousness, liberation and decolonisation,” said Prof Jan Crafford, Deputy Vice-Chancellor Academic during his opening and welcome address of Ubuntu Seminar that was held on Friday, 04 August 2017 at Research Conference Centre. The Seminar was organised within the School of Law under the leadership of Dean Annette Lansink.

Prof Crafford said that for the past two decades, something has been struggling to be born in South Africa. “We thought it was going to be the rainbow child but we were naïve.” Prof Crafford further said that it was always going to be something far more difficult and complicated, demanding and beautiful. He added that our politicians have proved themselves to be eminently unqualified to be the midwives to its birth. “Dare we hope that our Universities can be the incubators of the new thoughts and ways of thinking that will usher in the birth of reframed, transformed, decolonized and just South Africa; a South Africa that does not pay lip service to Ubuntu,” he said. Prof Crafford was paraphrasing from authors, Ben Okri and Ayi Kwei Armah.

Prof Muxe Nkondo, former Univen Vice Chancellor, under the title: ‘Reframing Education and Cultural Policy in Africa’, said, the main purpose of his paper was to present a set of interrelated ideas concerning the foundations and the possibilities of African knowledge systems in a polyepistemic and multicultural world. “In particular, this paper is about the assessment of the people’s capacity to advance a person’s capability to function in the contemporary world,” said Prof Nkondo.

He said the current discourse on African Knowledge system is concerned with culture, identity, and authenticity. He further told the audience that the paper investigates how people, through African Knowledge Systems, are able to make commodities, how they are able to command commodities, and what they get out of commodities. Prof. Nkondo said that there are different approaches that can be used to assess the possibilities of a particular knowledge system in a specific context. “The assessment is always based on “identity” or “authenticity” or a combination of both,” he concluded.

‘When Justice Is Not Enough’ was the title by Prof. Lewis Gordon, Professor of Philosophy and Jewish Studies at the University of Connecticut and Honorary Professor at Rhodes University. Prof. Gordon said, “I address a problem that emerges in many struggles for social transformation in the name of justice. Struggles for liberation are fought against injustice.”

He told the audience that the society is, in other words, unjust. He further added that fixing the society requires eliminating injustice. This injustice is often about those who have versus those who lack. Prof. Gordon further opined that those who have are often “the few,” though in some cases, they are also a fairly large majority, as is the case of the designated white populations of Europe.

“Sometimes those who don’t have are minorities, as is the case of immigrants, mostly of colour, in much of the so-called developed world. And in the so-called underdeveloped countries, those who lack are the overwhelming majority and in the first quarter of the 21st century, those who have less are the planet’s majority,” he added. Prof Gordon said, in other words, justice is not, then, exclusively about numbers. He added that questioning this point of view, is to make right what was wrong. “The effort is to make things just,” he said. He concluded by the words that, “Colonised and racially subordinated people commit “violence” simply by appearing. If to appear is to be a participant in the moral space, space whose legitimacy is built on such people’s exclusion, then the problem becomes a violation of what was presumed “just.”

Prof. Michael Neocosmos, Professor and Director of the Unit for the Humanities at Rhodes University, being the last speaker, spoke about ‘The Dialetics of African Popular Thought’. In his address, Prof. Neocosmos said that the state constitutes itself as a nation but this does not reflect a true picture of the nation. He said in 1990, South Africa was involved in a trauma whereby South African leaders didn’t know whether to treat Basotho as part of South Africa or not. “This is what has let the people of this country to initiate the issue of xenophobia attacks because the nation is confused, we do not know that we were divided. We lack the wisdom to understand that we are one nation,” he said.

Another problem faced by South Africa is that the nation was promised service delivery by the government. He highlighted that now people are folding hands waiting for the government to deliver. “On the other hand, the government is postponing service delivery from one term to another because it seems to be impossible to deliver to all at the same time,” he said. Prof Neocosmos added that the government today is enforcing decisions on its people because it cannot deliver everything that was promised. He concluded by quoting the saying that a chief is a chief by its people. He said this saying has been proven not to be true, “because the decisions are nowadays taken without even involving the nation. Leaders do not represent but suppress the people they lead,” he concluded.

Lincoln Mavhunga asking a question during the discussion after the speakers have spoken.

“Do you think Univen will ever be able to teach modules such as Mathematics and Sciences, Engineering in Tshivenda?” asked Lincoln Mavhunga, LLB third year student posing a question to Prof Muxe Nkhondo.

In his reply, Prof Nkondo said: “until such time when we translate all these terms into our own African languages, we will never achieve that goal. He further said that teaching our African children in foreign languages will never take us anywhere but to continue with the struggle”.

Prof. Gordon said: “The truth of the matter is that it seems to be impossible until you give it a try. It is possible that everything can be taught in any language. The reason why English is the medium of instruction is because English is straight forward, and it has dominated the world for a short time. It is the most used language in the world but this does not mean that it will remain the most used language in the world.” He said there will be other languages that will erupt to dominate the world like English did lately.