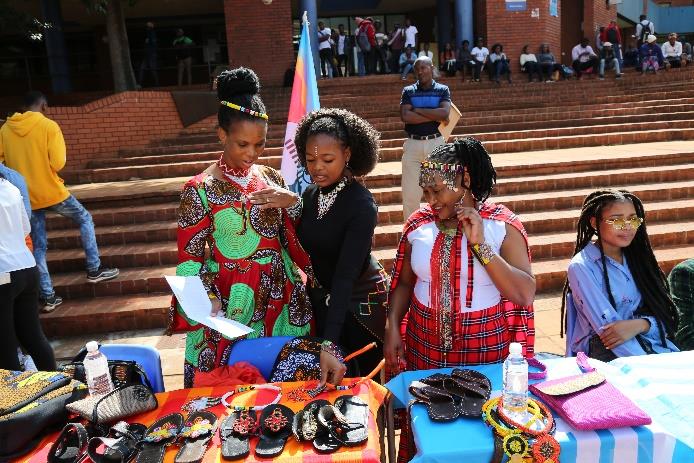 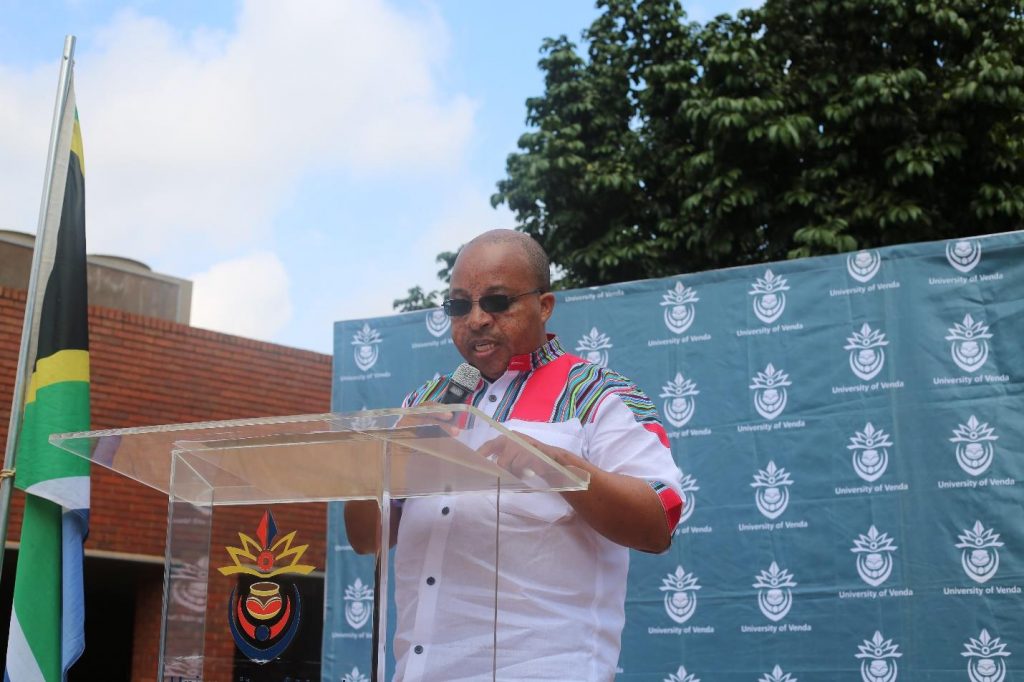 “We are a University in transformation, and we have committed ourselves to strengthening our position as a locally relevant, but globally competitive institution of higher learning in which all people, irrespective of race, gender or nationality feel welcome to contribute to our success,” said University Registrar, Prof Edward Nesamvuni, who was speaking on behalf of the Vice-Chancellor and Principal, members of Executive and Senior Management. Prof Nesamvuni said these words during the 2019 Africa Day celebration that was held at the University Freedom Square on Friday, 24 May 2019 under the theme “Towards durable Solutions to forced displacements.”

Prof Nesamvuni continued to express that, Africans want to celebrate the idea of African togetherness and the underpinning philosophy of Ubuntu. He said these themes are of central importance to Univen. “It should be our wish that throughout the continent there should be values of democracy inculcated in every community. The spirit of tolerance, celebrating diversity in race, tribes, sexual orientation and religion.” Prof Nesamvuni advised the audience to re-channel their energy towards unifying both local and foreign students and staff. He also told them to eliminate the dividing lines and celebrate unity in diversity. 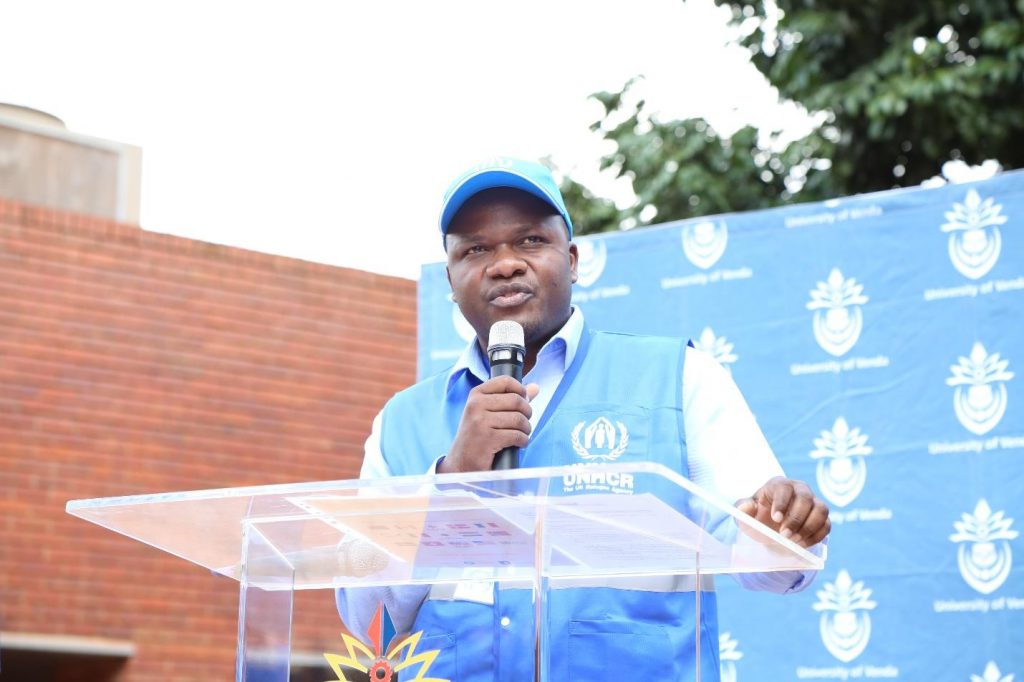 As the Keynote Speaker, Rey Chikwanda Head of Field Office at UNHCR said the launch of African Union in 2002 is the testimony of unity in Africa. He commended African countries for the unity that is happening in Africa. He said Africa is a home for approximately one third of global problem of refugees. “We are glad to note that in South Africa, Univen is the first institution that contributes to helping their fellow African people. We hope there will be written research from Univen to the African Union related to the review of the launch of African Union.” He summed his keynote address by advising students and staff members to remain peaceful Africans who represent a dynamic force in the international arena. 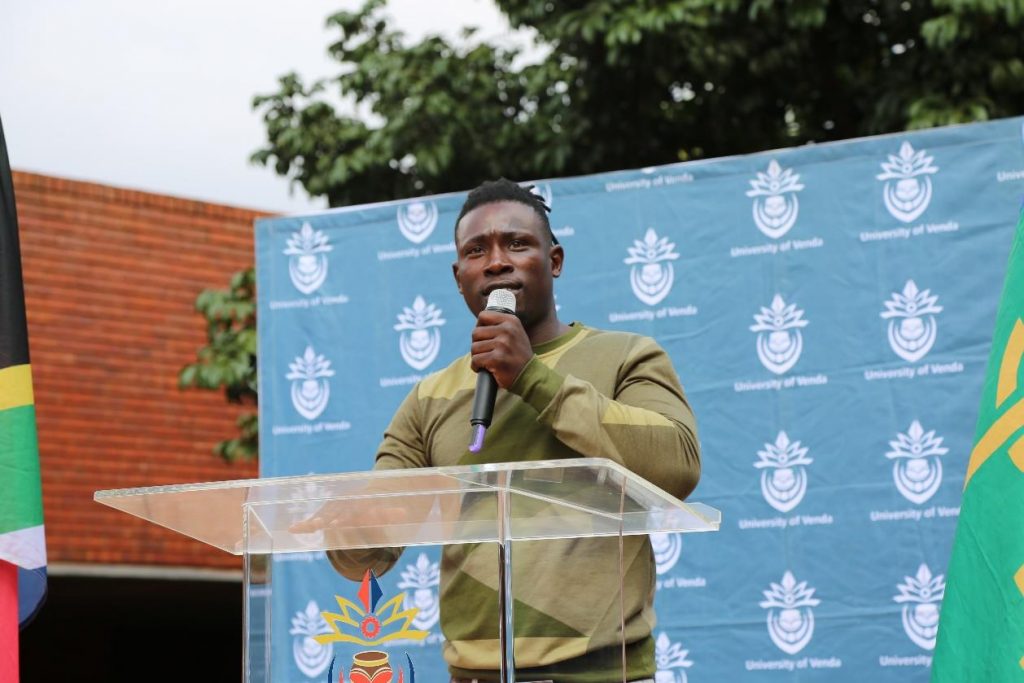 SRC President, Tsundzuka Hakamela said Univen is at the level of diversity and tolerance in terms of racism and xenophobic attacks. He said he witnessed that when he saw most students who were wearing their cultural attire during the 2019 May Graduation ceremonies. Mr Hakamela commended Univen graduates for embracing their African culture. He advised students to prepare for exams and to never cheat during the upcoming examinations.

The audience during the 2019 Africa Day celebration at Freedom square 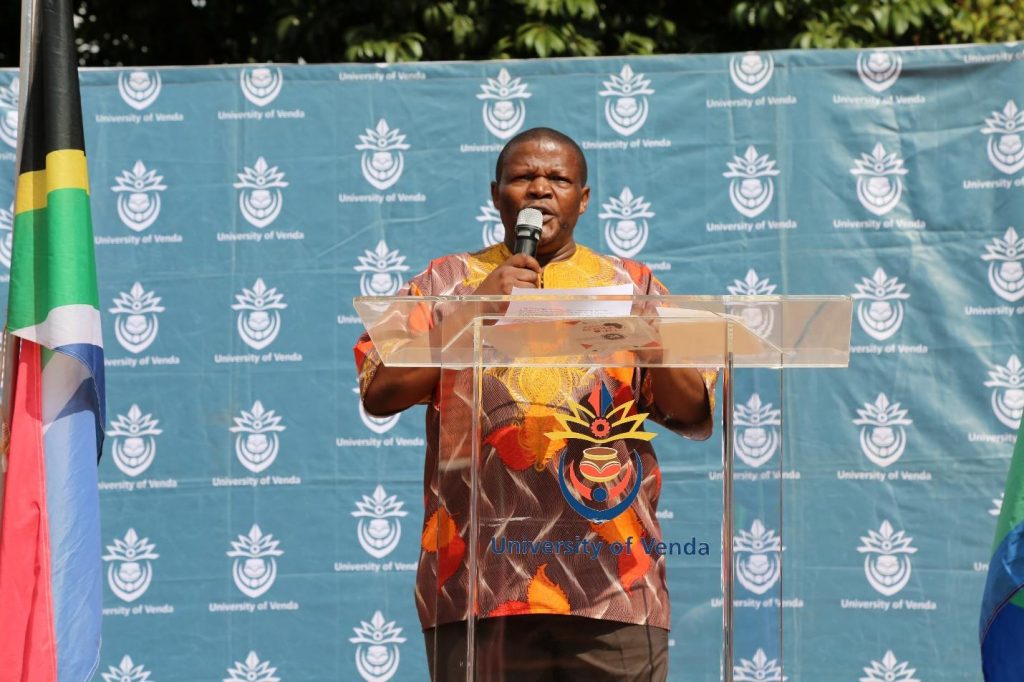 On behalf of the Director Student Affairs, Mr Lufuno Tshikhudo, the Head of Student Housing, Mr Lutando Charlie told the audience not to discriminate people based on the colour of their skin. “Let us tolerate each other and live in peace and harmony.” 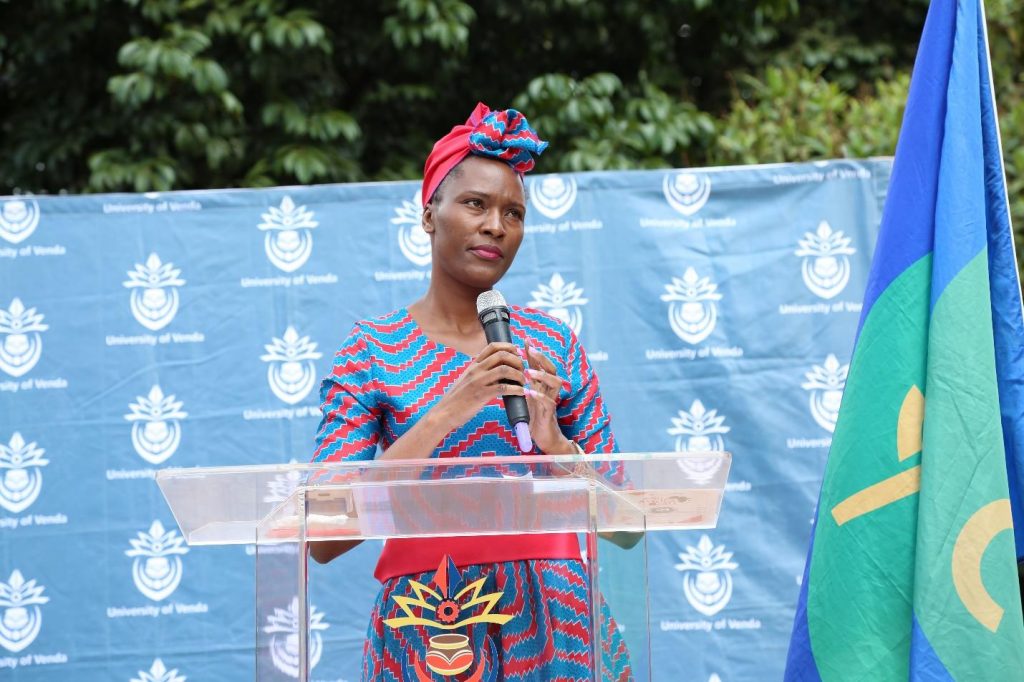 Dr Pertina Nyamukondiwa, a Postgraduate Fellow at Univen’s Institute for Rural Development presented the launch of support for Cyclone Idai victims. She said Cyclone Idai affected Zimbabwe, Mozambique and Malawi. “More than 1000 people across those countries lost lives. Although there are other countries that are donating for the affected, there is still a need for more support hence Univen took a decision to mobilise for these donations.” She told the audience that anything that they think can assist people who are affected can be donated. The closing date is 31 May 2019. She thanked those who have already donated and encouraged students and staff members to donate as well. “Let us be loving people and caring nation.” 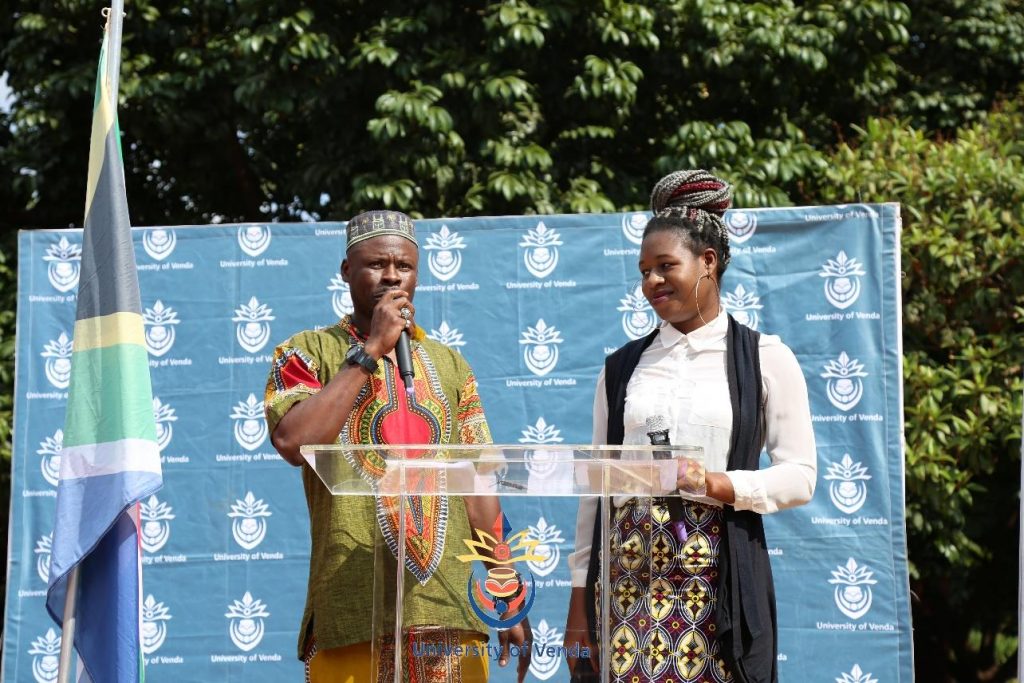 Joseph Madiemukamugagi from DRC and Zhowellar Nyasha from Zimbabwe represented Univen International Students Union (UNISU). The two students conducted the African quiz. They expressed that they are waiting to give as Univen students and encouraged other students to donate. The two students further thanked the government of South Africa for providing education and help for all Africans. “Let us all be united and conquer the challenges that we as Africans are faced with.” 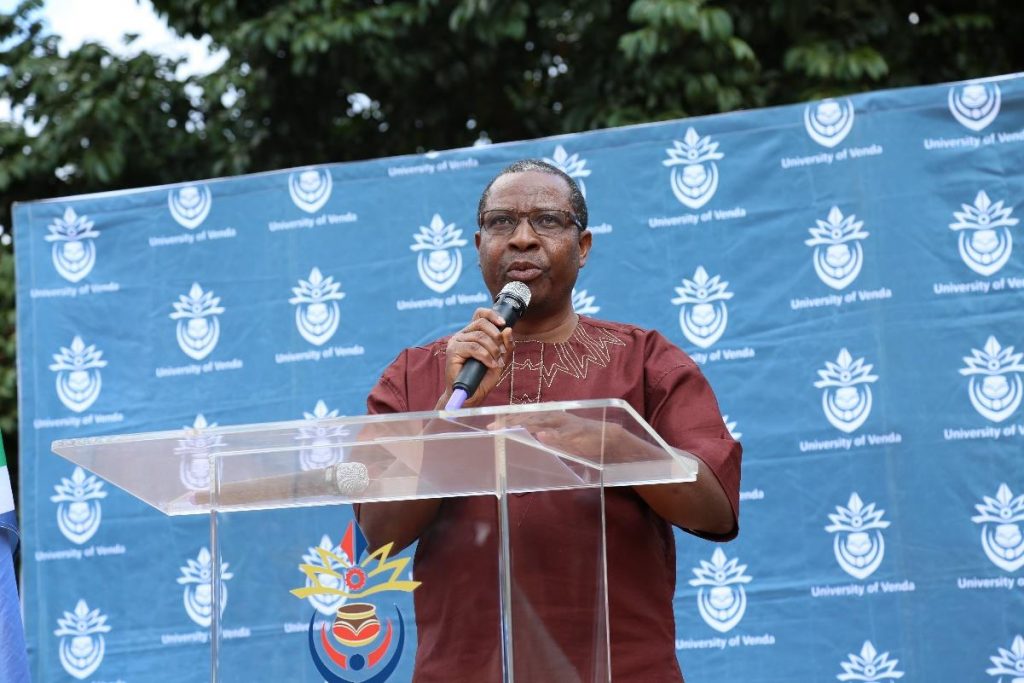 Vote of thanks was proposed by Dr Segun Obadire, Acting Director International Relations. He thanked all for their participation and attendance. 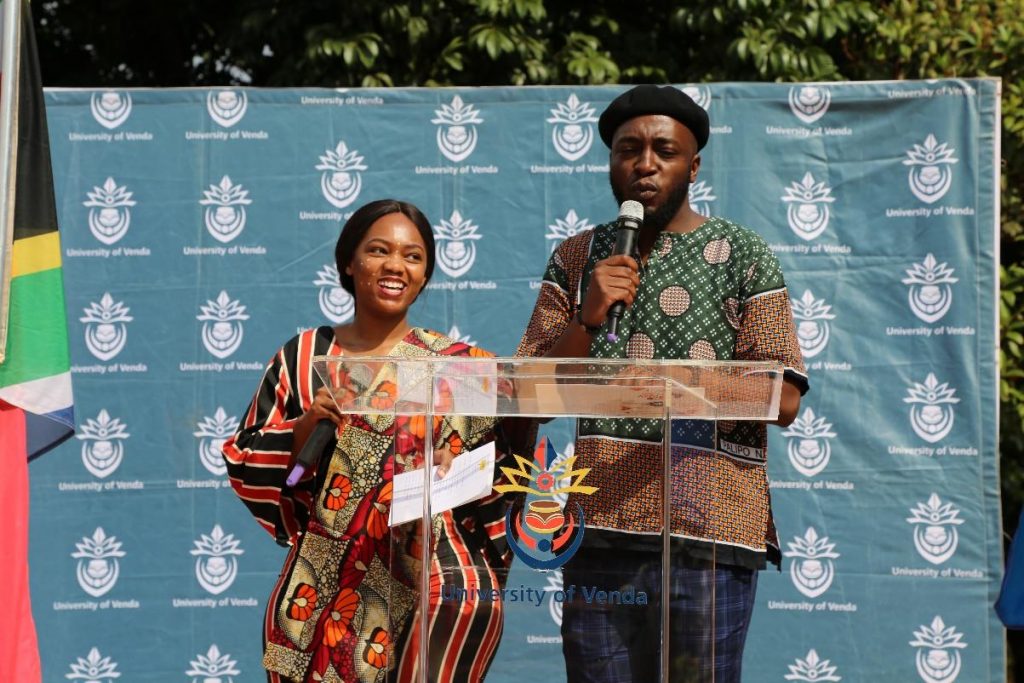